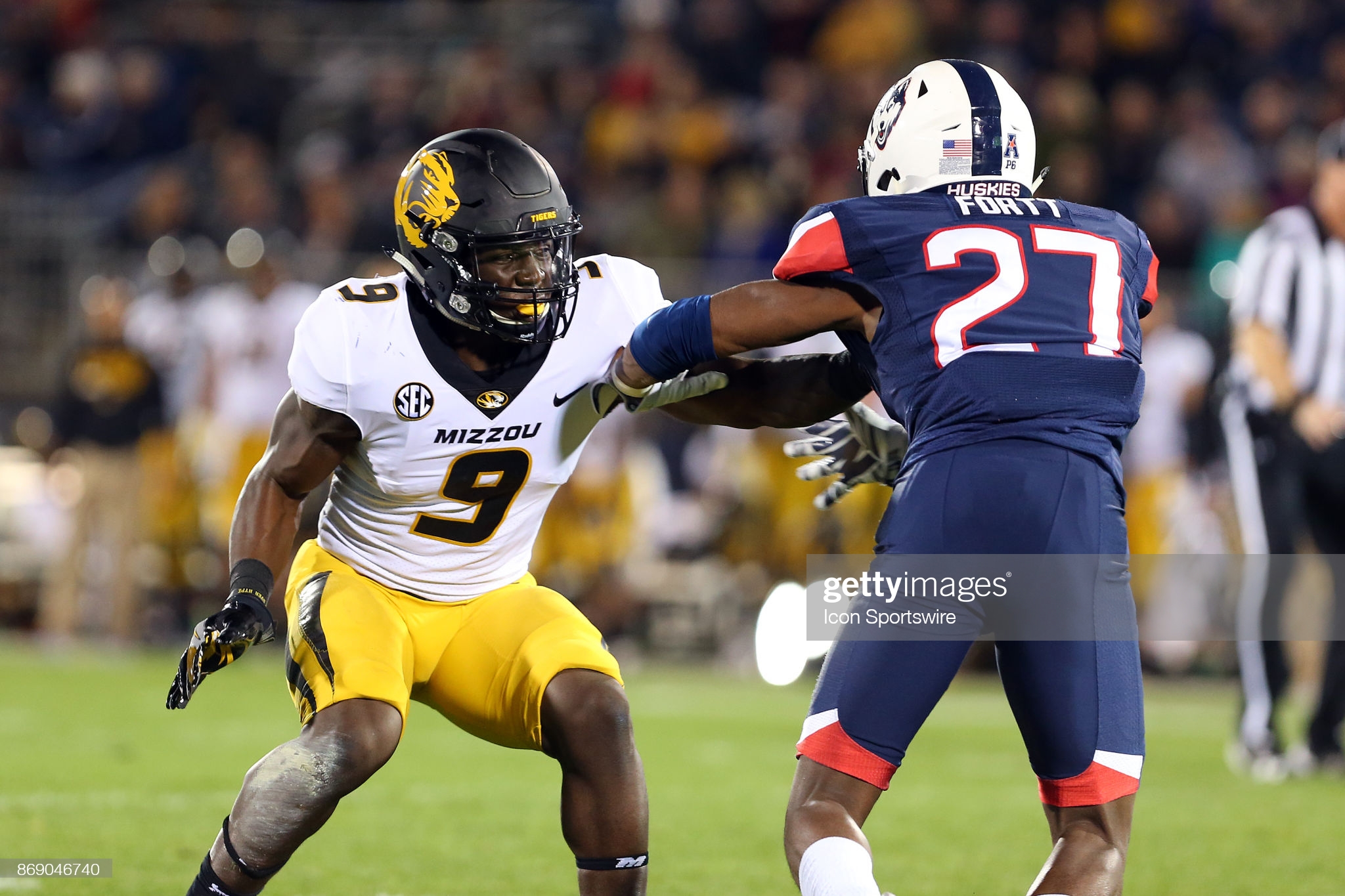 Watching the Missouri defense on tape from the 2020 season, the Tigers’ linebacking and defensive back groups were full of big hitters, multiple of whom will be drafted this week. One of the biggest hitters from those groups is safety Tyree Gillespie, a senior who was used as a versatile player in Missouri’s defense.

Through a four-year career with Missouri, Gillespie started for nearly three full seasons, taking over a starting job at safety early in his sophomore season and retaining it until graduation. He was a versatile piece for the Tigers to move around. He played deep center field as a single-high safety, was brought down closer to work in a two-high setup, and brought even closer to play alongside linebackers in the box in run support.

The senior displayed a knack for playing closer to the line, doing well in defending the run and when taking on Man coverage assignments. Overall, he was a stout run defender for the Tigers, from whatever spot they put him in.

First, take a look at his work in Man coverage. Gillespie drew some tough assignments, none moreso than the best tight end in football, Florida’s Kyle Pitts, during a game against the Gators. He had a standout showing against the tight end, including this play that shows his ability to man up a receiver (two angles). Gillespie lines up next to the box and reads the play from the start. He follows Pitts through the break point, and undercuts the Out route to swat away the throw.

Here is another play from a similar position for Gillespie, who follows his man against LSU along the stem, staying in-phase and denying the QB a throw (the pass went to another receiver). Gillespie is on the right side of your screen as the play begins, and never allows enough room to fit a pass in.

Gillespie stands a touch under six feet tall and just over 200 pounds, but he plays bigger than his size with an attitude and physicality to match. His physicality benefitted him on those two above plays, and does so to a larger degree here against Georgia.

Gillespie is lined up on the far side of the field at the 15-yard line here, against Georgia’s Darnell Washington, who dwarfs him at 6’7″, 260. Gillespie picks him up and never gets out of phase, and wins physically from start to finish against a player over half a foot and 50 pounds heavier than he is. He stays in position to deny the throw, and is able to go up and deflect the pass away with one arm, while the other is tied up fighting Washington.

While not as strong as his work in Man, Gillespie made his plays in Zone during his final season. He made quick breaks on throws downhill, and was able to finish off plays early by closing the distance as the ball was on its way. Here is a signature play against Alabama, and Heisman winner DeVonta Smith.

Gillespie is playing single-high over the middle, and begins breaking on Smith the moment Mac Jones begins his wind-up to throw. Gillespie arrives just after the ball, and lays a punishing hit to separate the reception from the best receiver in college football.

That hitting ability is a trademark of Gillespie’s. Here is one delivered against the Tigers, who get the first down but watch their receiver pay for it at the end.

Hitting is part of Gillespie’s game when defending the run, which he does well when lined up in the box for the Tigers.

Here against Florida are the best example of how he plays in that situation. On the first, Gillespie (top-left of screen) watches the run progress, and positions himself at the end of the lane to meet the runner. Without much space to elude him, the runner advances and Gillespie makes solid contact to end the play.

On the second, he is lined up to the right of the line, but again attacks the lane as it forms, and launches in to prevent giving up additional yardage.

The Missouri senior is also active from a higher alignment against the run, illustrated by two plays (both two angles) against Alabama and its future first-round picks. In the first, Najee Harris breaks through the line for a gain, but Gillespie comes up to meet him and answers power with power, providing the contact to stop Harris cold at the spot.

The second shows Gillespie’s athletic ability, facing Jaylen Waddle. He takes it to the outside, but Gillespie reads the play from the start and crashes downhill quickly with his 4.4 speed, and finishes the play with a big tackle on Waddle.

Tackling is one of two big issues with Gillespie’s game. He will often be forced to dive or make arm tackles, which runners are able to easily shake off or avoid entirely. With space to work, a runner can deliver a cut, which gets him out of position and forces those types of tackles, and he will also overrun some angles when crashing down on a run, leaving room open for a cutback that leaves him unable to make the tackle.

Here is one against the Gators. Gillespie breaks on the throw playing Zone coverage and arrives before the receiver can transition upfield. But Gillespie dives forward looking for an arm tackle, and is easily spun off by the receiver.

Another miss comes against Georgia on an inside run. Again, a quick break downhill by Gillespie to get to the runner, but he overruns the angle slightly, and the running back makes a small cutback that forces an attempted arm tackle that is easily broken for extra yards.

First, against Alabama on a Waddle reception, Gillespie (single-high at the bottom of the screen) makes a rounded turn once the pass is thrown, and that extra moment is the space Waddle needs to make the reception. Gillespie delivers another hard hit to try and separate him from the ball, but Waddle hangs on.

It is a very similar play and outcome here against Florida (two angles). Kyle Trask sends a pass deep down the right side, but Gillespie’s range doesn’t quite allow him to get there in time. Once again, a hard hit to try and break up the catch, but another big play against the Tiger defense.

Overall, there is a lot about Gillespie’s game that looks the part of a future NFL safety, and one who is projectable to a starting role early on in his career. His athleticism and mentality in Man coverage, along with defending the run, make him a candidate to play as a safety in the box as a rookie and throughout his career. Even with a couple things to work on in his game (tackling, Zone coverage), it’s not hard to imagine Gillespie being used in a single or two-high alignment during his rookie season, particularly if drafted by a team with a weaker secondary.

With work in those areas, Gillespie can become an NFL starter up high or in the box, someone who can be a tone-setter for the defense by playing reliably in coverage and in the run, and delivering big hits during games. His ceiling is higher than many of the other safeties in this class, and a team is going to take a chance on him before we get to the final couple rounds. Feasibly, it could even come near the end of Day 2.