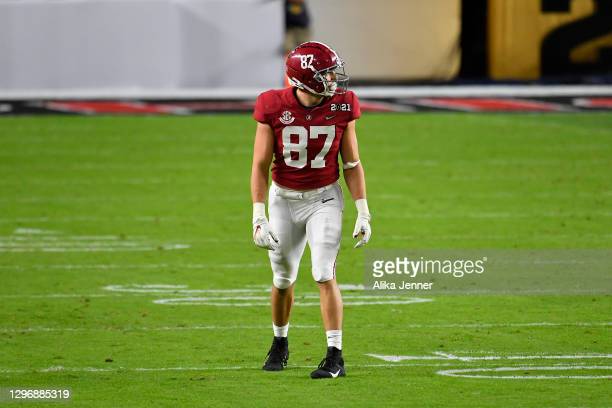 While Forristall was mostly overshadowed by the Crimson Tide’s explosive passing attack, he was one of the most important pieces of the Alabama offense. If you’ve watched any film of Alabama running back, Najee Harris, more times than not, you’ll see #87 leading the way.

Below, you’ll see Forristall lined up at the very bottom of the formation. He stays square until the very last second to angle the defender away from the hole. Harris is able to cut up right behind the block of Forristall for the walk-in touchdown. Then, Forristall gets excited about the fruits of his labor.

Forristall was used in a multitude of ways in Alabama’s pro-style offense, which is a big reason why he’s intriguing as a prospect. You don’t often get to see tight ends move around to block as much as he did in college.

This time, in the same game as the first clip, he’s in more of an H-Back alignment, and crosses the formation in a split-zone-type look. There’s a car crash between him and the middle linebacker that Forristall wins, as Harris again goes off his backside to explode towards the end zone.

If you’re looking for any type of block on Forristall’s tape you’re likely to find it if you’re looking hard enough. Another clip coming against Arkansas, this time it’s a combo block. A combo block is executed as two adjacent players attack a first-level defender (defensive lineman). As the initial block occurs, one of the blockers gains leverage and vertically pushes to a second-level defender (linebacker or box safety).

Lined up next to the left tackle, Forristall gets a great push off the line, blowing the defensive lineman off the ball before moving up to the linebacker. He completely washes him out of the play.

He also has good mobility to reach the second level and not get outmaneuvered. He consistently squares up to the defender and drives them out of the path of the running back. Doesn’t matter if it’s a lineman, linebacker, or a lighter, more agile slot defender. Here’s he’s tasked with blocking the slot defender from an in-line alignment. He easily “closes out,” or shortens the space between he and the defender, before gripping him up and driving him out of the play.

Forristall also was used in the outside screen game as a lead blocker. We know how important the receiver screen game has been to the Pittsburgh offense in years past. Watch how Forristall is able to easily reach the cornerback and drive him out of the play. This is a great picture to show Forristall doesn’t have a mean streak, as you’re not going see him have any nasty finishes to his blocks. He simply gets the job done.

Watch Forristall show off his core strength as he is able to seal and turn the edge defender. His block again opens a lane for the running back to cut up behind him and find his way to the end zone.

When it comes to blocking, the one flaw Forristall struggles with is generally playing too high. He is a stiff overall as a player, and his lack of flexibility trickles into all parts of his game.

You can watch on these two clips below. He actually has great blocks, but in the end, gets tossed aside because he’s playing higher than the defenders. If he drops his base and gets under the defender while driving his legs, this is much less likely to happen. This is something that will need to be fixed when transitioning to the NFL game, where defenders’ block shedding and play strength are going to be much greater than that of college ball.

Moving on to Forristall in the passing game. As much as he was used in the offense, he was never a large part of the passing game. Where you did see him utilized was the underneath and intermediate passing game. Most of his catches look exactly like what you see in the three clips below. He blocks then has a delayed release, and is found by the quarterback.

It’s clear Forristall has very strong hands and doesn’t have problems with concentration drops. He can be that reliable check-down and third down guy for a team. He’s just not going to stretch the field much. I also think it shows something that even with the weapons Alabama’s offense had, you still saw him lining up all over the field in terms of being in the slot and split out wide.

So, even if we weren’t able to see the “why” very often, I have to assume there’s something more there if they were willing to keep him on the field more during those situations. It certainly is easy to see how a tight end like Foristall was overlooked in an offense that includes the likes of Najee Harris, DeVonta Smith, Jerry Jeudy, Henry Ruggs III, Jaylen Waddle, and John Metchie III. Just an embarrassment of riches for the Crimson Tide.

While he wasn’t targeted much downfield, there were several examples showing he’s able to get open. He shows some route intricacies that will help him as he translates to the NFL. In this clip, Forristall is lined up in the slot at the bottom of the screen. You can see him get on top of the DB and “steps on his toes” to the outside, forcing him to turn his hips before exploding inside.

As a former receiver, it takes discipline and practice to allow yourself to step on the DB’s toes and not cut this short. By shortening the distance between yourself and the DB before cutting, it increases the separation when the cut happens, giving the DB less time to recover. Those types of small details are the difference between winning and losing reps at the highest level.

Below, Forristall has good tempo on this hitch and go, and is able to show his acceleration away from a defensive back. He was open, the quarterback was just under too much pressure to find him.

The below clip is a nice snag on a drag route from Forristall. Definitely not a great ball from Mac Jones, as it’s thrown well behind his tight end. This is what you’re going to get from Forristall. He gets the first down, but just isn’t athletic or flexible enough to make the tough catch and get upfield.

When he’s in the open field, he’ll get what’s there and nothing more. It often looks like he’s stumbling and lumbering when he’s running, reminiscent of Jesse James, but his consistent hands make him an asset.

This is another good route from Forristall. He shows tempo on take-off to avoid the re-route, something he consistently shows awareness of on tape, and gets open on the dig. The ball is behind him again, and he catches it initially, but just isn’t able to tuck the ball due to the DB holding his arm, and the DB is able to rip it away from him for the interception.

If this ball is thrown in front of Forristall, where it should have been, it’s very possible it’s a touchdown. Still hard to not place blame on the receiver here, as he did have two hands on the ball, just getting out-leveraged.

Similar to his blocking, Forristall has issues playing too high while running routes. The higher you are while making cuts, the slower you’ll ultimately be coming out of breaks. And in this case, you can see how it also causes you to be knocked off your feet easily, as Forristall gets tripped as he is running his dig route.

The number one thing I’m hammering Forristall from day one is to play lower in all situations. Hypothetically speaking, if he were drafted by Pittsburgh, I’m sure head coach Mike Tomlin would have a field day with Forristall on the blocking sleds during camp.

The last clip we’ll go through was one of the most entertaining clips I found of him on tape. As previously mentioned, he was a former high school quarterback, so Alabama was willing to get a bit creative with his ability to take a snap from under center. On a fourth and inches, they put him in a yo-yo motion, and instead of going back across the formation, he jumps under center. Then, he sneaks it for the first down. Fun play. A possible solution to Ben Roethlisberger not doing QB sneaks?

Forristall was a fun watch if you enjoy watching blocking tight ends. He truly can and has done it all in that department. He certainly has limitations as a receiver, and because of that, I can’t see him developing into a TE1 in an NFL offense. When watching him, you feel like you’re watching a guy that is almost at his ceiling. He can be a guy that can give you that blocking presence as a TE2 or TE3 on a roster and give you solid snaps in a pinch. That, plus his extensive injury history, will allow a team in need of tight end depth to be able to grab him deep into Day 3.

Games Watched: at Arkansas, vs. Florida, vs. Georgia