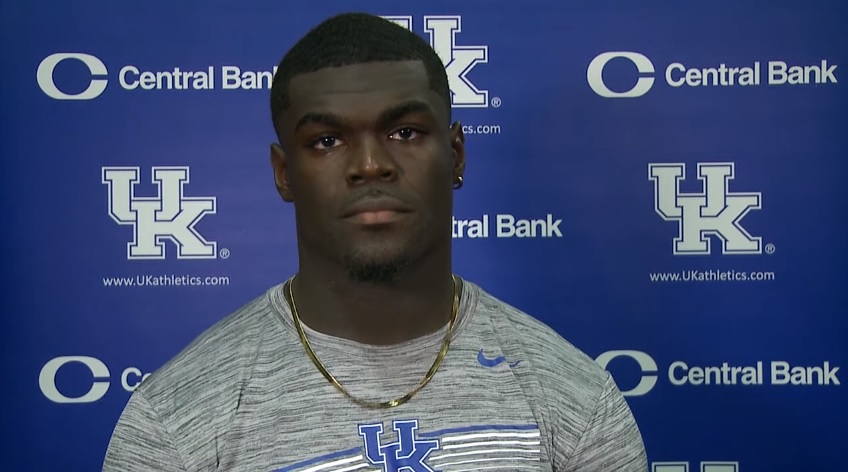 Early in the 2020 season the Kentucky Wildcats used a rotation of linebackers.  As the season wore on one of them became very hard to take off the field.  Jamin Davis has good size and length and brings some pop to his tackles.

Against the pass, he has played in Zone and Man coverage.  He lined up in the middle of the field and moved out over slot receivers as well. In Zone coverage, he has good mobility, gets good depth and his height and length make him difficult to throw over.  He has good awareness of receivers coming into his area and keeps his head on a swivel. He reads the quarterbacks eyes, moving freely with them and has good change of direction and acceleration to close on throws. He played more Man coverage in the later games I watched and handled those opportunities well.  It was mostly running backs and tight ends in short area passes but did show he has enough speed to keep pace up the seam.

He as good ball skills using his length to break up passes and can hold on to interceptions. He has good timing and acceleration as a blitzer and can get skinny through small spaces or use lateral agility to side step to free rushing lanes.  He was used on straight blitz, delayed blitz and even occasionally from the edge.

Vs Mississippi State, Davis (22) gets good depth on this Zone drops reads the QB’s eyes and uses his athleticism and length to break up the pass.

At Tennessee, this is also in Zone and Davis (22) reads the QB, makes a nice play on the ball and takes it 85 yards for a score.

At Florida, he steps forward taking himself out of position but shows good speed and to catch up and close the window on this throw.

Vs North Carolina State, he shows off his acceleration to shoot a gap and get to the QB for a sack

Against the run, he was solid diagnosing Gap schemes and outside runs. On Gap runs he was able to read his keys and get into gaps, filling holes or taking on blockers to disrupt runs. He uses his hands and length well to hold off blocker and did a nice job to shed blockers. On Zone runs he shows good speed and awareness in traffic to get to the outside or use change of direction to angle around blockers. He is a very good tackler and delivers with authority to shut down yards after contact.

At Tennessee on third and short and comes on a run blitz. He shoots through the B gap and shows off the COD making a hard left turn to make the tackle short of the line.

Vs Georgia, this is a mano a mano battle.  The running back and Davis both with running starts to meet in the hole.  The runner doesn’t go down but Davis wins stopping him on contact.

Vs Georgia this play has it all: strength, athleticism, range and a strong tackle. He takes on the block to force the play outside, shows speed to the sideline, jumps over a body and make a physical tackle.

At Florida, he reads the pulling guard and steps up into the gap using his inside shoulder to take on the blocker leaving his outside arm free to make the tackle.

In the games watched the Man coverage reps were limited and there will be a learning curve in the NFL. He wasn’t able to get off blocks when blitzing. His mental processing is a work in progress and showed improvement as the season went on. His reading of inside runs was adequate earlier in the season and it would take him time to react to the developing blocks. His angles to the outside can get to steep allowing cut back by runners. It may be just his athleticism but it didn’t seem like he was going at full speed all the time.

Vs Georgia, here is an example of when he processes slowly. This player is similar to one above and this was earlier in the game. He is located in between the hashes and as the run comes his way the other linebacker is three steps toward the ball before Davis moves. Davis still makes the tackle but his mental processing must become more consistent.

Overall, Davis has athleticism and speed to play in Zone or in Man coverage.  He can fill gaps, has good change of direction, range to the outside and is a strong tackler.  He needs to improve his mental processing to diagnose plays quicker, fine tune his Man coverage and play at full speed to show off all of his ability.

I didn’t know what to expect from Davis and I came away really impressed.  I think his ceiling is high. He is good now but if he can continue to improve he could be really good.  He has unusual size for the positon but others have succeeded with similar size (Fred Warner, Zach Cunningham).  For his position, I think his options are open. He could start as a WILL linebacker and use his athleticism to react and chase and eventually move inside with improvement to the diagnosing of block. For Pittsburgh, I think he could be a three down BUCK linebacker by year 2.

Games Watched:  2020 – Vs Mississippi State, At Tennessee, Vs Georgia, At Florida, Vs North Carolina State