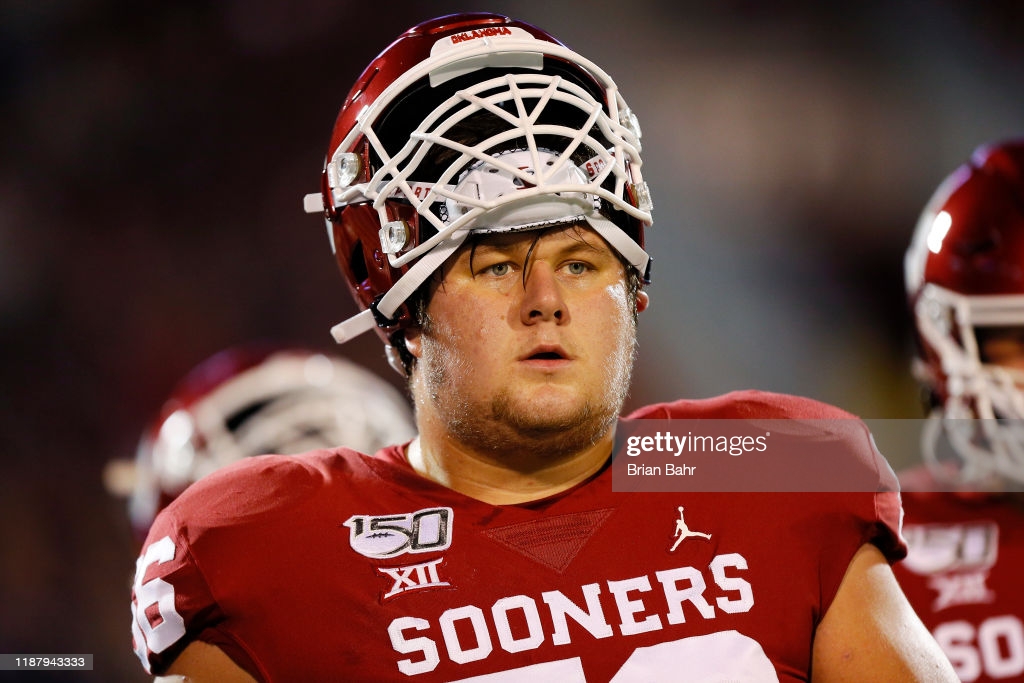 Creed Humphrey is the definition of the kid that was never the most gifted athletically, so he focused on mastering the fundamentals to be the best. Those fundamentals seem to be working out for him, having not allowed a single sack in his last two seasons. When it comes to draft evaluation, the center position is a unique one compared to its offensive line counterparts. Centers are evaluated more as a whole unlike offensive tackles who get drafted off of athleticism alone.

Humphrey certainly has shown he has the whole package. So much so that in 2019, Oklahoma head coach, Lincoln Riely, referred to Humphrey as the best player on the entire team. This was while Oklahoma quarterback, Jalen Hurts, was in the middle of a Heisman finalist season.

So let’s dive into Humphrey’s film and see what makes him regarded as one of the top centers in this year’s draft. Important to note that Humphrey will be lined up at the center position in all of the below clips.

We’ll start with Humphrey’s pass pro. As previously stated, he has great technique in terms of anchoring and then using his feet and hands in unison to keep defensive tackles that are much larger than him at bay. Here, you can see he repositions his hands multiple times.  Even with his short arms he’s able to anchor and mirror the tackle allowing for the QB to scramble upfield.

Humphrey has a strong wrestling background. His father was a 3-time All-American wrestler for Oklahoma and his brother was all-state in high school. He’s mentioned that this taught him how to use active hands and feet to out leverage his opponents.

Below is another great example of Humphrey stone walling his opponent in pass pro. I love this visual because the whole OU line either gets beat or pushed back into the pocket and there’s Humphrey all alone handling his work easy as ever.

This year’s Cotton Bowl against the Florida Gators was one of the best games Humphrey put on tape. The defensive tackle he’s assigned to block on this page is 6’5” 340 lbs, according to the University of Florida website. Look at how Humphrey, even with a 30+ pound disadvantage, locks up the tackle, anchors down and then finishes the block 5 yards downfield.

The most impressive part of Humphrey’s game that I’ve seen is his ability to reach block. A reach block is a block by an offensive lineman or tight end where they have to cross the face of a defender and seal him off. It’s a difficult block, one that requires a high degree of athleticism and technique.

Humphrey’s tape is FULL of successful reach blocks. He’s truly mastered it. It was hard to pick one out of his tape, but the one below has a bonus. Humphrey barely gets any type of chip from his guard here, but his get off after the snap is so elite that he doesn’t need it. He gets on the outside shoulder of the 1-tech DT and seals him off. The running back is then able to cut up field right off of Humphrey’s backside. While Humphrey is executing his block he sees the backside 1-tech DT coming and decides to block him too while he’s at it. Unbelievable rep.

Here’s another clip from the Florida game. I wanted to point out again just how elite Humphrey is at getting off the ball after the snap. He almost always get’s hands on first and when he does it’s all but over for the defenders. He also shows here just how strong he is here easily moving the tackle off the midline and clearing the way for the lead blocker and running back.

Below is another clip to demonstrate just how much of freak Humphrey is strength-wise. He again gets hands on first and then uses his core strength to torque the defensive lineman to the ground. I first thought the d-tackle just got tripped up but looking closely you can see it’s all Humphrey.

One of the few knocks I have on Humphrey is his lack of athleticism. Inline, you don’t see him outclassed much but when he starts pulling and trying to block second-level defenders it comes out. Here’s an example against Texas, where Humphrey pulls and just looks confused. Should he get the linebacker? The safety? Instead he gets caught being hesitant and does nothing. The safety flies down and flips the running back for a short gain.

While that was easily the most egregious example I could find in the games I watched, there were multiple reps where he struggled in pulling situations at the second level.

Humphrey does have Superman strength, but there were few times on tape that he looked like he was sleeping and playing too high. Below is an example against Texas where he gets bull-rushed into the backfield and ends up tripping up the running back for a loss.

Generally speaking Humphrey’s worst game that I saw was against Texas in 2020. He looked rusty and even had an illegal snap sprinkled in. To be honest, there wasn’t a guy on the field that day that didn’t look rusty. It was filled with awful football.

Overall, I think it’s safe to say Humphrey is going to be one of the top 3 centers drafted come April. It’s hard to say whether his athleticism and short arms will scare off teams. That would be the only reason I could see him to drop a little.  If you’re not scared away by that, you’re getting an old school football player that has the smarts to pick up a system quickly and make your offensive line better from the moment he’s drafted.