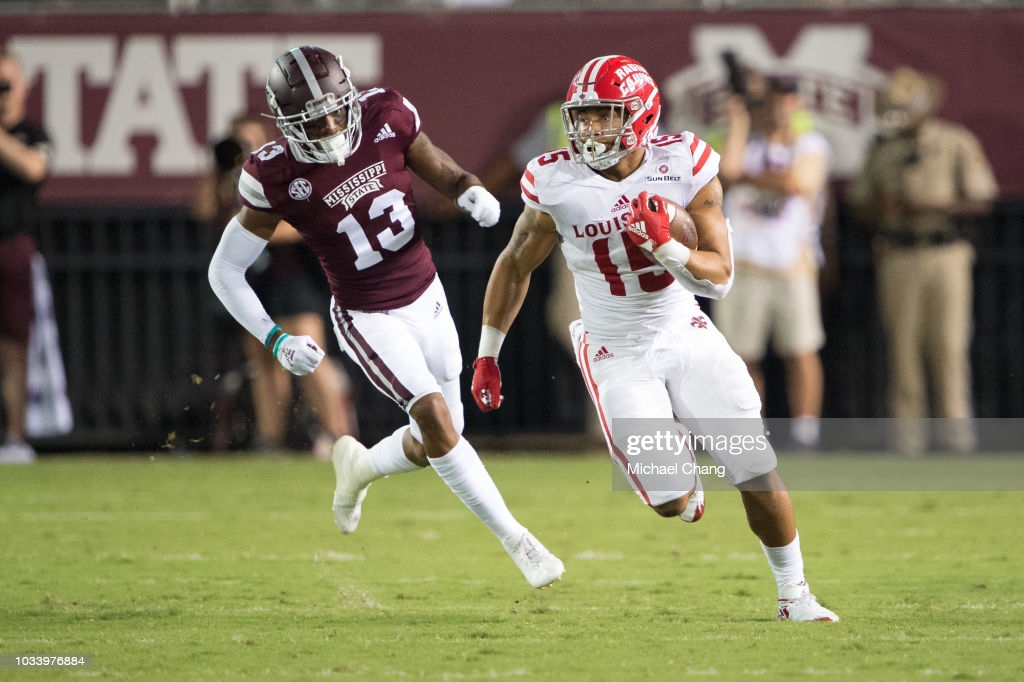 Elijah Mitchell had a very productive college career especially when you consider he was part of a three pronged running back group through his career at Louisiana. Despite sharing the backfield duties he averaged 13.7 touches, 92 yards and a touchdown per game for his career.  He is a solidly built, lean back with a strong lower half.

As a runner, he was used in both Zone and Gap/Power running schemes. On Gap/Power runs he shows good patience and vision to read the leverage of his blockers. On inside Zone has good vision and uses a solid jump cut to find the right running lane and on outside Zone he sets up is runs well by pressing outside and reading the flow before choosing his gap. He has a little wiggle in the backfield able to side step penetration while keeping his eyes up.

Once he makes his gap choice he shows good acceleration and burst into the gap with solid pad level and good contact balance to run through arm tackles and good leg drive to push the pile for extra yards. He has solid long speed able to turn solid runs into good ones once he gets to the second level and will drop a shoulder at contact. He’s a physical runner and had success on short yard runs. He was willing to block for others on plays such as quarterback draws, fly passes and downfield for teammates.

At Iowa State, this is a Zone run to the left. Once he sees his gap he shows good acceleration, runs through and arm tackle and spins through another.

At Iowa State, again he shows his burst through the first level and his contact balance shrugging off a couple defender before an awkward tackle.

At UAB, he will hop through a small gap, use a subtle cut to his right to avoid the linebackers attempted tackle and then a jump cut left to add 8 more yards.

At Appalachian State, he’ll press to the left after the hand off before tucking inside and finding the correct gap to the right to get a good gain.

As a receiver his route tree was extremely limited but he made the most of his opportunities.  His routes were generally in the short area.  Screens, flat, stab and curls were the most common from the backfield and they would split him out to run slants and stop routes.

His hands are good, a natural pass catcher with hands away from his body and the ability to adjust around his frame.  He tucks the ball away quickly and looks to get up field.  He uses his blocks well and can slide to avoid a defender and can break tackles against DB’s.  He wasn’t used often in Pass Pro in the games watched but it looks like he know where he is supposed to be, is a willing pass blocker and will chip defenders on release.

At Alabama, just a simple flat route to the right showing soft hands. He gets his head around quickly, runs through the first would be tackler and gets about 13 yards after the catch.

At Iowa State, here is a screen pass where he will release to the left. He adjusts well to the pass behind him, makes the first guy miss and gets good yardage and stays on his feet awkwardly at the end.

His pad level is inconsistent. He will run high at times exposing his body to bigger hits and putting his body in awkward angles on some tackles. He’s a little tight in the hips and doesn’t string together moves. His elusiveness and change of direction is adequate. He doesn’t show the quick cuts to elude defenders relying more on subtle moves to make defenders miss the square hits. His technique in Pass Pro needs work. He is too upright, doesn’t use his hands well and his timing and execution on cut blocks is ineffective.

Overall, Mitchell has good size, vision, acceleration and contact balance. He is more of downhill, one cut runner who can make defenders miss with subtle lateral agility and he’ll break the arm tackles.  He can catch the ball well and has produced yardage after the catch.  He’s not flashy and you rarely see him celebrate. He’s probably not going to make the highlight plays but will be a steady, blue collar producer. He has shown he can play as part of a committee and has the body to handle twenty carries if necessary.