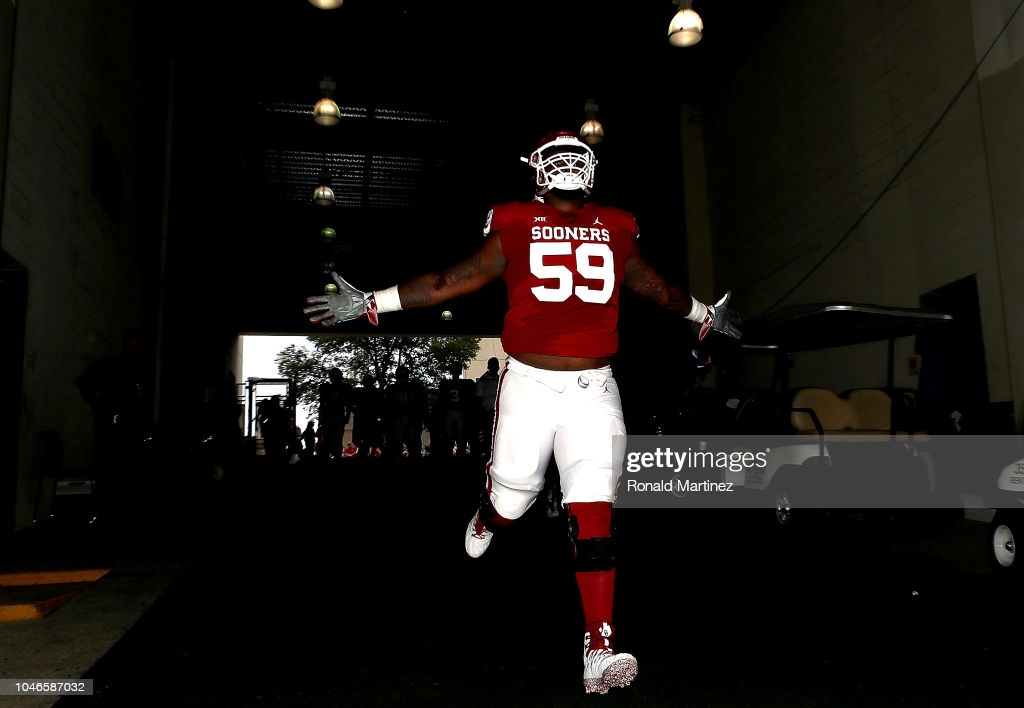 Ealy is a two year starter at right tackle for Oklahoma who had the number 11 offense in FBS this year averaging just under 500 yards of offense per game and was seventh in the country with 57 touchdowns. He strangely looks both wide and lean and doesn’t seem like his listed weight of 326.

The first thing you notice his he plays in a very high stance. This may be and Oklahoma coaching strategy as the left tackle also aligns very high. As a pass blocker, he has a solid kick slide able to get solid depth to take on speed rushers to the outside and keeps a good half man relationship to the defender. He starts of his hands in a good position and has good length and heavy hands to keep rushers at a distance. When he keeps his hands inside he has the play strength and size to lock on, control and eliminate pass rushers. He shows good awareness on twist and stunts using his drag hand inside to help detect the switch. He shows good effort on screens to get in front and get his hands on a defender. Good aggressiveness to help when uncovered and the strength to send rushers to the ground.

At Texas, Ealy (59) is on the left side of the screen. Here he is able to lock on and control the pass rusher. You’d like to see him get his hips under him and not bend at the waist so much but he wins this rep.

At Texas Tech, he has his eyes on the edge rusher but can feel the defensive tackle coming his way. He uses his drag hand to the inside to feel for the DT while watching the Edge and switches to the DT seamlessly.

Vs Florida, he’ll push the defender to the inside before working outside down the line of scrimmage on the pass to the running back. He displays solid mobility and good awareness to pick up the closest defender and shows off his strength getting a push on defender shoving him 5 yards downfield.

As a run blocker he is best on Gap/Power runs. He shows good aggressiveness and gets a good push on down blocks and can move guys out of the way and becomes a wall while hinging on the backside.  With good hand placement he can control and handle base blocks. He was used to pull quite often and has solid initial quickness and is very hard for defenders to get around on the edge. When he squares up to the line of scrimmage while pulling he can swallow up defenders.  He gets a good push on double teams with teammates driving the opponent out of the picture.

Vs Florida, here he will pull to his left with the right guard. He’s able to get around the edge and square up to engulf the defender leading to a big run.

Vs Florida, he will combo to the inside with the right guard getting a good push there before releasing to the second level and taking on the linebacker.

He plays high and maybe that is due to his initial stance. His lateral agility is marginal and he struggles with counter moves to the inside. Very good speed rushers will get him to cross his feet after two kick slides. He starts his hands inside and swims them both wide opening up his chest to stab/punches from defenders.  He will bend at the waist and reach for defenders limiting his play strength. Due to his chest being open his anchor is adequate and defenders can get inside his arms and drive him back. When climbing to the second level he is hit of miss with quick defenders able to avoid him. His mobility is adequate when pulling and getting outside and has limited change of direction on the move. His lateral agility would not make him an ideal candidate for Zone running teams.

Vs Oklahoma State, he plays with his hands low and brings them up to the outside. This allows the pass rusher to put a hand in his chest and drive him back.

Right now, Ealy is a better run blocker than pass protector and will fit nicely in a Gap/Power run offense. He has the play strength and demeanor to move defenders or at worst form a wall difficult for defenders to get around.  He plays very high right now but that may be a result of what he is asked to do in college. His hands and technique needs to improve in pass protection to not allow his chest to be so open as pass blocker and his lateral agility may be an issue.

Is right tackle his position in the NFL? I feel he may be better suited to play inside. And while his size seems like it may be too big for guard, he’s actually about the same size as Ramon Foster. Inside he wouldn’t have to work laterally against the pass as much and he has the strength to handle power rushers while being and powerful run blocker.

Games Watched:  2020 – At Texas, At TCU, At Texas Tech, vs Oklahoma State, Vs Iowa State, Vs Florida