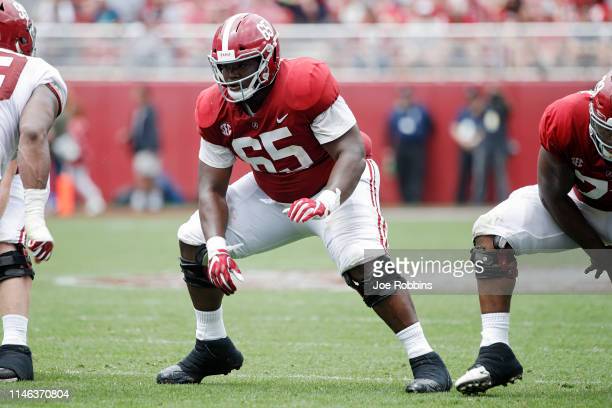 – Massive size, one of the biggest linemen in his class
– Physically imposing player, players forced to try to go around him, not through
– Great play strength, creates lots of movement on first level down/combo blocks
– Size makes him hard to get around in pass protection
– Proper placement on his punch with violent hands, wins the battle once he locks on
– Shows good technique in pass pro, knee bend and plays with overall good posture
– Effective puller when asked to kick out EMOL, able to stun defenders
– Decent mobility relative to size
– Some positional versatility, logged time at each guard spot
– Good starting experience against quality competition
– Decorated career

– Doesn’t always seem to play to size/strength
– Want to see a more consistent physical/mean streak and finish in his blocks
– Isn’t aggressive or physical enough in pass pro when uncovered
– Struggles in space when asked to climb to second level, often a step slow working to linebacker and has difficulty remaining on track with back when pulling around
– Falls off blocks too often, struggles to stick on contact when on the move
– Vulnerable to counters in pass pro, some issue moving laterally against spins and quicker pass rushers
– Inconsistent in picking up stunts, eyes can be late to recognize
– May need to lose some weight in NFL to improve conditioning/mobility, reports he struggled with weight in school, seems to tire later in games/longer developing plays
– Off-field questions that will need to be answered

– 25 career starts with the Crimson Tide
– Started five games at LG in 2018, made eight starts at RG in 2019, mostly played RG in 2020
– First-Team All-SEC, as voted by coaches (second-team AP)
– Four-star prospect out of high school, chose Alabama over Auburn and Tennessee
– Initially suspended by team late in 2018 for undisclosed violation of team rules, eventually suspended by NCAA, missing six total games from 2018 to 2019 (specific reasons unknown)
– Admitted he struggled with weight early in college career but did appear to make improvements, named one of team’s Most Improved Players in Spring of 2018

Brown was one of the players I was excited to check out entering draft season. Read a lot of positive buzz around him at the end of the season and at 6’4, 350 pounds, he’s one of college football’s biggest players. On paper, this looks like the type of guy the Steelers – yearning for physical maulers – need.

But I gotta admit I wasn’t quite as impressed with him after going through the tape. As always though, we’ll start with the positives of his game.

When it all comes together, there’s no question Brown can generate a good push in the run game. He’s effective creating first-level movement on down and combo blocks, washing defensive linemen down the line to get them out of the gap and create a lane for the running back.

In pass pro, he has a strong punch capable of rebuffing pass rushers. Left guard in this clip, locking down the three tech. Sound base and strong upper body working together.

Brown isn’t a complete liability in space but he’s below average there. He often struggles reaching the second level, letting linebackers run and chase free. These can be tough assignments but in the NFL, you’re expected to execute. And in this example against Tennessee, he works to the LB but immediately falls off the block. He’s the LG in the clip below.

There are times where he doesn’t play to his power and size either. Hard to tell if it’s a technique issue or maybe something to do with conditioning but times where he can be overpowered. The right guard in this clip, watch him get knocked down. Don’t expect to see that from a 350 pounder.

And I don’t quite see the mean streak and finish I do with say, his teammate Landon Dickerson, who we profiled yesterday. Not in the run game or pass pro. No doubt, Brown is a strong dude, but at his size, I was hoping to see someone finish his blocks more often and really put the fear of God in guys smaller than him (which is just about everyone).

Overall, Brown certainly isn’t a bad prospect. And if you can get his weight down a little bit, you’ll probably improve his conditoning and mobility a bit. Even if he lost 15 pounds, he’s still one of the biggest dudes on the field. His relationship with the strength and conditoning coach will be important. Brown needs to be on the right program to succeed.

With guard not being a serious need for Pittsburgh, tackle and center are greater areas of concern, Brown probably isn’t in the cards for the Steelers. On the high end of things, he could be the next Larry Warford and I suspect he’ll draw plenty of Solomon Kindley comparisons from a year ago. I just couldn’t help but get this bad, James Carpenter vibe when watching his tape, though.