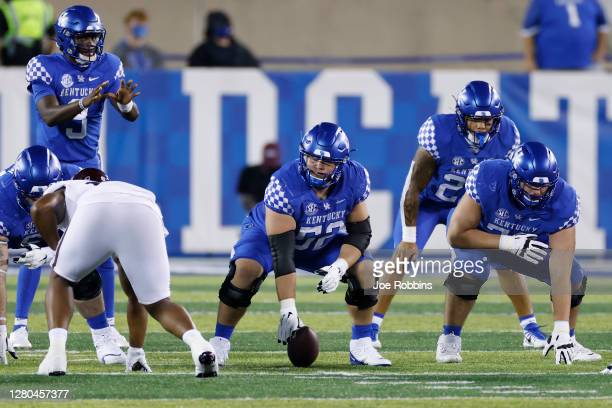 A four year starter in the SEC is as good a place as any to start with the 2021 draft profiles.  He has gotten his share of accolades along with a Senior Bowl invite and there is a lot to like. He was a team captain and leader on the offensive line. He is a good pre snap communicator verbalizing things he recognizes to get the offensive line on the same page.

In Pass Pro, he gets the snap back quickly and accurately (they played mostly in shotgun) and gets set up quickly. When covered by a defensive lineman he shows a quick punch and uses his natural leverage and good core strength to absorb power rushes and anchors well. He shows good hand strength to lock on to defenders and shows good extension to keep them off his body.  He displays active hands to counter those of the defenders and solidly mirrors laterally to stay between the rusher and the quarterback.

He has good agility to slide on protections or to pull and protect against the end man on the line of scrimmage. He has the mobility to get out in space and in front of screens. When uncovered he gets good depth and looks to help teammates where it’s needed. He has solid awareness on twist and stunts. He is a little undersized and very quick defenders can get an initial push before he resets his feet.  Would like to see his head on a swivel more as he’ll focus to one side and not see a late rusher from the other side.

Against Georgia, Jackson (65) communicates to his left and the will take on a bull rush and he uses a solid initial punch, good hand usage and leverage to cut off this rush.

At Alabama, Jackson (52) will slide to his left to pick up the 3/4i tech and his hand placement is good to the inside on the chest of the defender and despite a hand to his face he is able to reset and anchor in the pocket.

At Alabama, he is going to use quickness to his right to get out in front of the receiver on this fly pass and pick up the linebacker clearing the way for a big play,

Against the run, he has very good quickness at the snap and his hands are consistently first to make contact before the defender. He has good lateral quickness and can reach block on 1 tech defenders without assistance on outside Zone blocks. He shows good timing and very good quickness to the second level on Combo blocks.

On Gap runs he shows good quickness on Down blocks and on Base blocks he relies on positioning to wall off and create lanes and holds his ground well. On double teams he works well with teammates getting hip to hip to move defenders.  He has good agility to pull to either side as well as good awareness to pick up the most dangerous defenders.

He’s not a people mover on individual blocks and could add some play strength.  His feet will slow on gap blocks and stalemate rather than drive. At the second level, he could break down a little sooner when handling quick linebackers.

At Auburn, Jackson (52) will block to the right helping to knock the DL off his feet before curling back inside to wall off the linebacker on this long touchdown run.

At Florida, he will show off his quickness to his right to Reach block the 1 tech and works to get his hips around and use his leverage on open a lane for the runner.

Vs N.C. State, Jackson (65) will fire out and jam the nose tackle and pass him off to the right guard before showing good mental processing to pick up the linebacker coming downhill.

Overall, Jackson is a good prospect with the ability to play in a Gap or Zone running scheme with very good mental processing, quickness, agility and use of hands. He has natural leverage, a solid punch and good anchor in Pass Pro. He has adequate push as a blocker relying on body positioning and could break down a tad sooner on the second level.

How he measures will have a say in his draft stock. Much like Nick Harris last year who was also athletic and of similar size but had below average arm length which put him in the middle of the 5th round. Also I’ve seen his weight listed from 292 to 310 so official measurements will be important.  If he measures fairly well and with his experience and ability he could start for a team next year. At worst he’ll be a quality reserve in 2021.

Games Watched:  2020 – At Auburn, Vs Georgia, At Alabama, At Florida, Vs North Carolina State