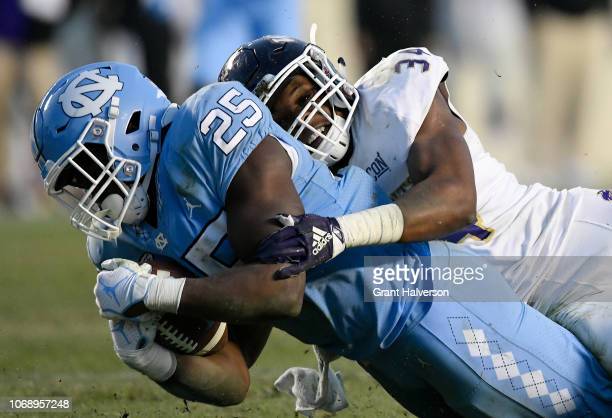 -Terrific burst once he touches the football
-Great contact balance with impressive power packed into frame
-Compact frame that is built to handle increased workload
-Sees the field well and sets up blockers for success
-A true one-cut and go running back that sticks his foot in the turf and gets vertical in a hurry
-Feet are blur on tape; efficient footwork in the backfield
-Forces a ton of missed tackles; defenders just fall off of him
-Willing pass blocker who packs a punch
-Soft hands and is capable of being a decent checkdown option out of the backfield

-Not a home run hitter by any means despite impressive burst
-Limited receiver who wasn’t asked to run many routes
-Tends to try and hit the explosive play at times, rather than taking what’s there
-Never really found himself in a feature back role at UNC
-Was success a part of spread offense with weapons all around him? Some soft boxes he ran against

-Played in 35 career games at UNC, finishing three-year career with 2,297 rushing yards and 29 touchdowns on 366 attempts. Added 50 receptions for 539 yards and four touchdowns
-Enters the 2021 NFL Draft at just 20 years old and 416 total touches
-Ranked fifth among Power 5 running backs with an 89.8 grade on offense according to Pro Football Focus in 2019 as a sophomore, and the No. 1 RB in college as a junior by PFF in 2020
-Averaged over 7.0 yards per carry as a junior for the Tar Heels, adding 4.59 yards after contact
-Named the 2020 ACC Player of the Year by Pro Football Focus
-Named Second Team All-ACC and Second Team All-American in 2020

There’s something about North Carolina running backs that have some serious burst and power that get me excited. Years ago I was very high on Giovani Bernard, who has carved out quite the career with the Cincinnati Bengals.

Now, it’s junior Javonte Williams, who was arguably the best running back in college football last season, right up there with Alabama’s Najee Harris, at least for my money.

Williams burst onto the scene in 2019 as a sophomore under Mack Brown and more than met the hype in 2020, turning in an incredible season for the Tar Heels. He has impressive burst once he touches the football, possesses high-end vision, great contact balance and some very impressive power in his compact frame.

Much like Bernard was years ago, Williams is well-built for the position. He runs hard and loves to dish out punishment.

Williams is very good at turning the corner and setting up blockers to succeed in the open field, as you can see here against Miami (Fl.) in 2020. Once he turns the corner and has a full head of steam, look out.

That Hurricane safety had to find out the hard way just how powerful Williams is up close and personal. That’s a thunderous collision in the open field.

I’m sure Miami is thankful they don’t have to see Williams ever again.

I love the patience in the backfield here to let his blockers work out in front of him. Once he sees the blockers set up, Williams hits the boosters, turning the corner with ease, rumbling downhill again, dishing out punishment at the end of his runs in space.

The contact balance is just so impressive. It helps that he’s the one dishing out the punishment, but the contact simply doesn’t phase him.

Once he’s in the open field he’s so tough to bring down. Williams runs through arm tackles, takes away angles from defenders in a hurry, and does a great job of picking his way through defenses.

Aside from the open-field prowess in this clip, I love the burst Williams shows once he’s through the hole. He just explodes.

The footwork is just so darn impressive.

Look at the lateral jump cut and burst to turn the corner and run away from some Miami defenders in 2019. That looks like Nick Chubb to me, which is who I see a lot of in Williams’ game.

Williams just glides across the turf. It’s remarkable to see.

He’s a one cut runner and is very decisive in where he wants to go with the rock. I love that in a running back.

What tops it all though for me with Williams is the contact balance.

He’s certainly not the shiftiest or the fastest in this draft class by any means, but he runs hard, has great contact balance and finds a way to force missed tackles.

Virginia Tech had a really tough time getting Williams on the ground this last season. His lower half is so strong that it’s nearly impossible for defenders to get him on the ground from around the ankles.

His ability to somehow stay upright after the first initial forced miss is insane. I saw a lot of that in Buffalo’s Zach Moss coming out of Utah last year, which had me so high on Moss.

If you can force missed tackles and stay on your feet with consistency, I’m all in.

The only real problem I have with Williams is that he sometimes gets into this groove where he’s trying to hit the explosive play on every touch and sometimes misses the opportunity to take what’s in front of him.

Here against Notre Dame in 2020, Williams should have been able to outrun the defense to the corner here, easily moving the chains in a tight game.

Instead, Williams was searching for the home run and inexplicably slowed up, allowing the Notre Dame defensive tackle to track him down, leading to no gain.

I’m sure that’s a rep Williams would like back because there’s no way an interior DL should have tracked him down on this touch.

Aside from the occasional mental gaffe, Williams wasn’t really used as a receiver at North Carolina, aside from being a checkdown option.

He has soft hands and rarely struggled to cleanly catch the football, so I’d like to see him utilized more in the passing game in the NFL. He could be a real weapon as a receiver in the right system.

Overall, I like Williams quite a bit in this loaded running backs class. He has relatively light wear and tear, forces misses at a high rate, is a willing pass blocker and runs angry.

I think he could find himself in the discussion for RB1 ahead of the 2021 NFL Draft.