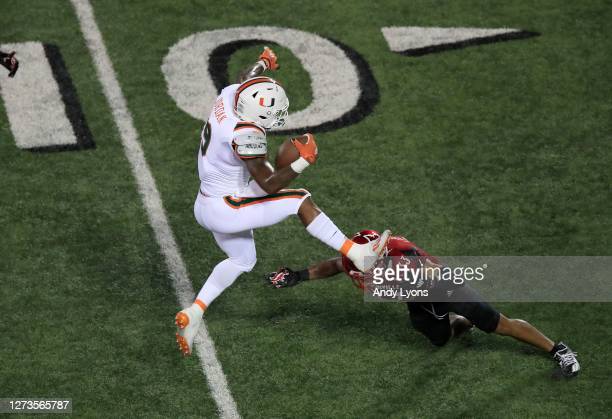 – Excellent, smooth athlete with great size
– With the ball in his hands, often makes the first man miss, built compactly
– Showed ability to separate consistently from safeties and linebackers
– Split time as H-back, attached TE as well as slot receiver, brings versatility to schemes
– Natural in and out of breaks, shows nice acceleration in the open field
– Valuable near the goal line, can use size to box out defenders
– Little by little improving blocking each week, not impressive but makes the effort
– Has improved route running, adding stemming and head fakes to route technique
– Good starting experience against quality competition
– Security blanket and one of best TE’s in conference throughout career.

– Liability as a run blocker
– Poor hand placement leads to bad blocking technique
– Inconsistency catching the ball with hands, becomes a body catcher when heavily contested
– Struggles in contested situations, rarely makes contested catches
– Team manufactures catches for him, doesn’t separate with footwork, relies on speed
– Lacks physicality to be an every down in line tight end, more of a flex style TE
– Pass pro rough at times, fails to have consistent leverage
– Injury concerns, missed a handful of games with injury in career
– Dances too much in and out of breaks at times, slows down timing

Brevin Jordan has been a tight end I’ve had on my radar since before the season. He possesses a unique skill set that translates to the modern NFL, and although he isn’t a traditional in-line player, he makes magic in space. If the Steelers decide not to re-sign Eric Ebron or decide they want to move on, Jordan could very well fill that role.

The hype around Jordan is palpable, but I think right now I think his biggest upside is his athleticism. He still is a very raw prospect with refinement and fine tuning needed to mold him into an unstoppable player.

In this first clip, Brevin Jordan is lined up in the slot. What you see from him is a nice stem towards the defender’s outside hip, gives a head fake as if he’s continuing his track outside the hash, and breaks for a post. He leaves his defender in the dust, showing his speed in the open field.

Again, Jordan understands attacking leverage. He attacks the safety’s leverage and cushion and breaks inside for a slant route, catching a touchdown. Inside the red area, Jordan becomes nearly unguardable. He provides mismatches with his speed and size.

Jordan can take a simple drag or flat route and turn a five yard gain into 15-20 yard gains. His YAC ability, and how fast he moves down field would be a perfect fit in the Steelers short area passing game.

What worries me is Jordan’s catch technique. He is not a player who plucks the ball out of the air, leaving him susceptible to drops and struggles in contested catch situations. He runs a nice out route but because he isn’t strong at the catch point, he drops the pass.

Again, driving home the point of how he struggles catching with his hands, he jumps in the air and catches the ball with his body. The play ends up being fine here but there are opportunities where the ball can bounce off of him.

At times, he is lost in pass protection. Half blocks both guys here leading to a sack. He needs some work in identifying who he’s blocking and being aggressive at the Point of Attack.

Overall, Jordan is a player who should be regarded as a top five tight end in the 2021 class. He has the best upside out of the group, and was underutilized with the strengths he possessed while at Miami. Early in his career, I can see a team use him in TE screens, shallow routes, out routes, anything that gets the ball in his hands quickly.

What he needs to do better is improve his catch technique, blocking with consistency and continue to ascend as a route runner. He won’t be a first rounder but should go somewhere on Day 2.

He should be on the shortlist of tight ends the Steelers look at after round one. With Pitts and Freiermuth likely off the board by then, settling for Brevin Jordan could be a nice consolation prize.

Games Watched: at Louisville, at Clemson, vs North Carolina, vs. Oklahoma State