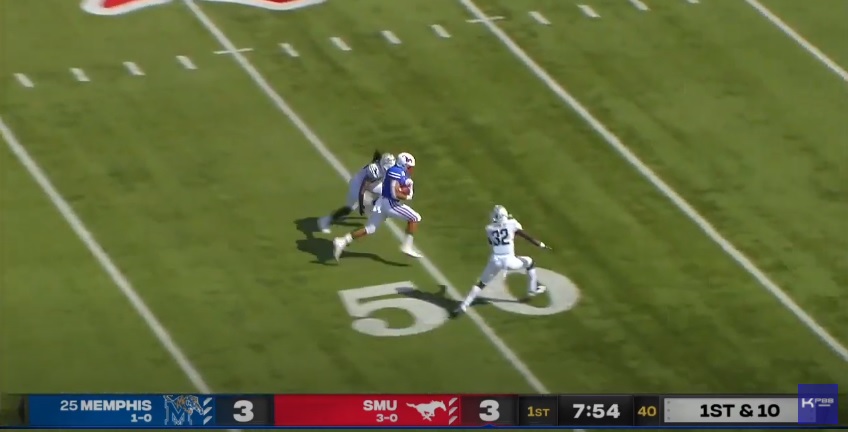 Granson is coming off two productive years at SMU after starting at Rice University.  He played primarily in the slot but also saw time inline and lined up in the backfield.

From the slot, he is used on the short and intermediate levels of the route tree. Against Press coverage he had solid quickness and used of hands to create initial space off the line and has solid quickness to separate against safeties and linebackers. He has a solid release from inline and the backfield and works through traffic well. At the top of his routes he has solid physicality and use of hands and will use an arm over to clear the defender. He displays very good mental processing versus Zone coverage and is good at finding the openings between defenders. They used him often to sell blocks and then release late across the formation and he commits to his role.

He has very good hands and tracks the ball well snatching the ball away from his body.  He can adjust all around his frame while stationary or on the move and high points the ball well on deep throws and contested balls. His speed shows up after he has the ball in his hands with good acceleration and burst, getting up field quickly and willing to lower his shoulder or use a stiff arm to gain extra yards.  He puts in the work on the scramble drill to help out his quarterback.

Vs Memphis, Granson (83) will run a fade at the top of the screen and shows his ability high point and adjust to the throw to make a nice catch near the sideline.

At Tulane, he’s at the top of the screen and you won’t see the route but I wanted to highlight the acceleration after the catch. He displays good burst to get 28 yards after the catch.

At Houston, he is in the slot to the left. He’ll run a shallow In route that is initially covered but he works to find space, make the catch and lower a shoulder to get down field.

As a blocker, he is a high effort, willing blocker against all defenders. He was used as a run blocker inline, from the backfield and blocking from the slot.  Against defensive backs he is good with strong hands able to control his man.  In Pass Pro he is solid on the backside in slide protection and hinge blocks. He showed improved hand placement and ability to mirror in games later in the season.

Vs Florida Atlantic, he is in the slot to the left and will be blocking on this screen. He locks on and controls his man to the whistle.

At Tulane, he is in line to the right on this pass play and will show good hand placement and feet on his play. This was easily his best pass blocking effort I saw but it shows there is some potential there.

He has adequate acceleration off the line of scrimmage versus Off coverage. He obviously has burst I just didn’t see it off the line. He has adequate explosiveness out of his breaks to gain separation with speed or by manipulating the defender. Needs to be more sudden and quicker at the stem of his routes. When run blocking inline he bends forward and drops his head limiting his sustain. On lead/fold blocks he is tentative often absorbing rather than delivering the contact. As a pass blocker, he had limited chances in the games watched and there is potential there with added play strength.

Vs Tulsa, he is lined up inline on the right and will fold inside to lead block. He is tentative and linebacker knocks him back.

Overall, Granson has very good hands, has a nice catch radius and has some burst after the catch. I think he has potential to improve on the route running and as blocker with some added play strength.  He doesn’t have the ideal size to play inline and he doesn’t create a lot of separation on his routes.

He has good athleticism and the want to succeed. He’ll fit as an H/move tight end and could be valuable in a creative offense and will be a core special team guy. Word is that they want to see him play fullback at the Senior Bowl as well.  The more places he can line up effectively the more valuable he can become.  I don’t so a lot of player comparisons but Trey Burton came to mind watching him.