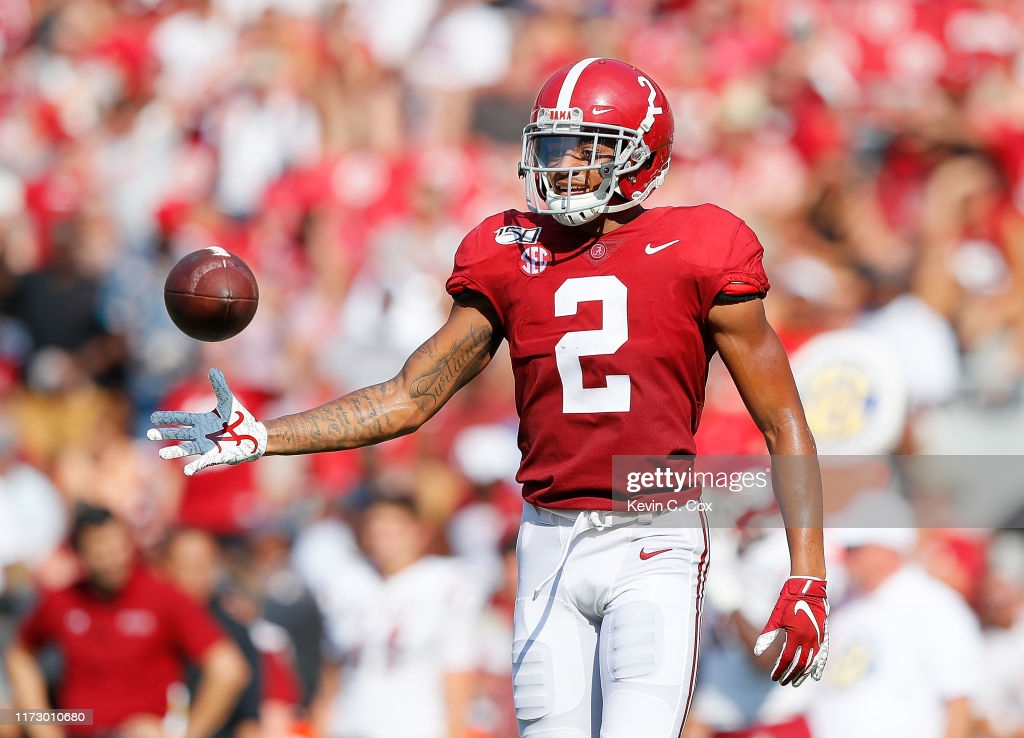 The first thing to note about Surtain II is that he is rarely targeted by opponents in the pass game. Teams tend to stay away from him and for good reason.

The first game I watched was the Florida game from earlier in the season which was arguably Surtain II’s worst game. The Gators scored the second highest total of the season against Alabama with 46 points and Surtain II had an unusually high number of targets.

On this play Surtain II is matched up with the best Tight End in college football, Kyle Pitts. Pitts uses a nice release to get inside and then shields Surtain II from the ball with his big body.

Surtain II loses his leverage and then tries to undercut the route to make a play on the ball but is unsuccessful.

Here Surtain II is matched up with receiver Trevon Grimes. Surtain II is initially in phase with Grimes but the ball is high and a little underthrown. This allows Grimes to come back and make a play on the ball.

As you can see from the sideline angle Surtain II fails to find the ball in the air which allows Grimes to snag it for the touchdown.

These plays against Surtain II are few and far between but it’s important to show them for a balanced analysis of him especially against a team with NFL caliber weapons like Florida.

Late in the 4th Quarter with the Gators trailing, they targeted Surtain II twice in close succession. The first was against Pitts. This time Surtain II does a great job transitioning out of his backpedal and coming downhill and attacking the catch point forcing an incomplete pass.

Two plays later the Gators come back to Surtain II, this time with receiver Jacob Copeland. Copeland runs a speed in against Surtain II who is playing with outside leverage. Like the previous target Surtain II does a great job breaking on the ball and attacking the catch point and forcing the incompletion.

Surtain II is aligned in off coverage and does a great job high pointing the football against the taller Skowronek. Unfortunately for him he was out of bounds resulting in an incompletion

Surtain II is a very good tackler and makes his presence felt in run support. Here Notre Dame run speed option to his side, with Book pitching the ball to RB Chris Tyree.

Surtain II takes a good angle to force the ball back inside to his help. When the ball cuts back he makes a solid tackle using great ‘near foot near shoulder’ technique.

Against Tennessee, Surtain II was targeted on a deep fade ball just before the end of the half. Surtain II is playing press man with an inside alignment due to the wide split of the receiver.

On this play Surtain II was slightly out of phase but does a great job making a play on the ball and forcing the incompletion.

On this last clip Surtain II is playing as CB in a Cover 2 scheme, meaning he is responsible for defending the Flat zone which is 5-15 yards deep and from the numbers to the sideline. He does a great job of reading the route distribution and not getting too much depth. He then watches the QB’s eyes and shoulders turn and throw to running back Ty Chandler.

He gets downhill and makes a great form tackle for a 2 yard loss. Surtain II is a complete football player. A great cover corner, who excels in press and is a great tackler too.

I would anticipate that Surtain II is off the board before the Steelers pick at #24. The Steelers clearly have bigger needs than CB, (OT, OG, RB).

Although unlikely; the Steelers could be in a position where they are without 3 of their top 4 corners from 2020. Hilton and Sutton are both headed for free agency, and although I’ve not seen any rumors about Joe Haden retiring, he isn’t getting any younger. Surtain II would be a great addition to the Steelers defense but I would anticipate a team like Dallas or Denver to select him at about 10th overall.