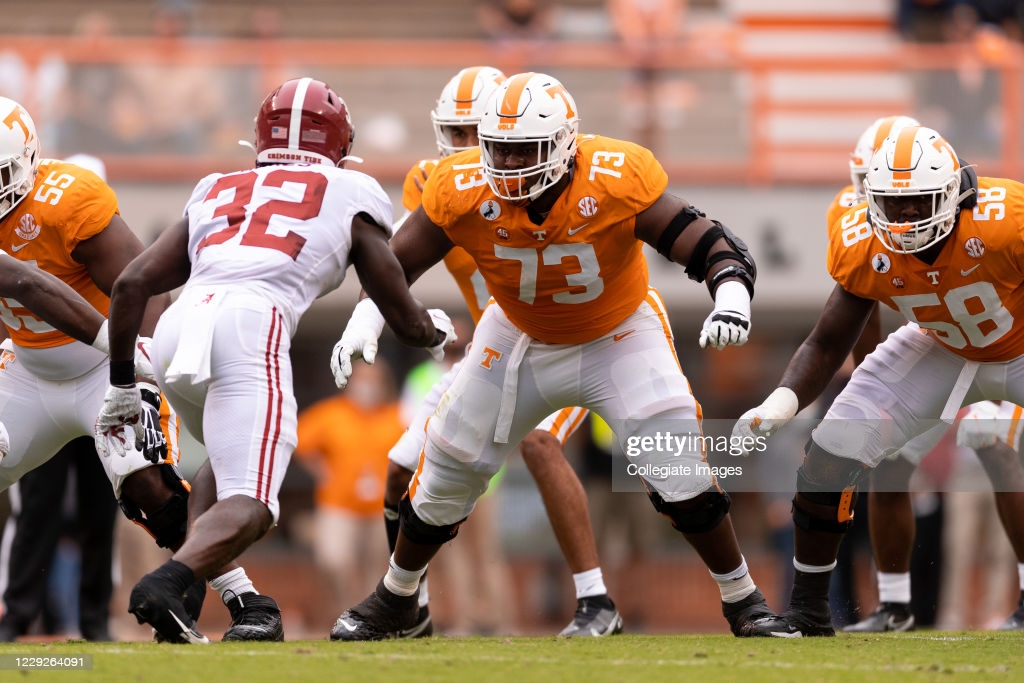 There was a guy that recently retired that had 145 career starts across 11 seasons for Steelers that often was underappreciated, and he goes by the name of Ramon Foster. I couldn’t stop thinking of Foster when watching Trey Smith play. I may have been influenced by the fact these two University of Tennessee alumni both play left guard, hover around 6’6” and 330 lbs while donning the number 73 on their jersey (Foster wore 78 at UT, 73 in the NFL), and earned All-SEC honors in their respective freshman and junior seasons. However, the comparisons on paper roll right on over to what I see in Smith as a true old school brawler at the guard position with a long NFL career ahead of him.

You may have seen this viral video that shows the true bully in Trey Smith on this “coffee house stunt”. The initial set leaves Smith looking for work, but when the linebacker finishes his coffee Trey politely introduces him to Neyland Stadium’s turf.

This was the very first snap I saw of Trey Smith and I knew right away I was in for a treat. He flaunts his elite get off and acceleration to the 2nd level, blowing the linebacker back and out of the play. You can see him get a little handsy at the end. Probably could have been called for holding as you can see him look back and check for the flag after. Nonetheless, a great way to set the tone at the beginning of the game.

This is where you can really see Smith’s experience and IQ come into play. With 3 down linemen, his initial set leaves him looking for work. But, even as the trash starts to creep in around him, he has the vision and awareness to recognize the delayed blitz by the middle linebacker. He drops quickly, and kicks out the blitzer, keeping his QB clean.

One of my favorite traits you see in good offensive linemen prospects is they always look for work in the passing game. Smith has the gene and knows how to use it. Here he is against South Carolina in 2020 helping his left tackle put the edge rusher on the deck and clearing a lane for his quarterback to scramble up the middle.

Here you can see Smith’s ability to pull. Not only does he pull here but he finishes the block and violently at that. Another tone-setting block during the first drive of a game that will have the defense knowing they’re in for a long day.

The Kentucky game was where I started seeing some of Smith’s bad habits come to the forefront. You can see him pulling on the play and he may have been a bit confused by how quickly the RT gets beat. Regardless, he gets a great first punch on the EDGE and then continues upfield to do…. nothing. He has to choose to either kick this edge out of the play or keep pressing up to the second level and hit the first guy in blue that he sees. You can find a few plays like this on his tape that just leave you asking him to do more.

Another play against UK where Smith is a bit lazy, this time it’s on a pass set. He doesn’t get his usual clean, violent first strike and stops moving his feet. This leaves him overextended and off-balance, leading to a hit on his QB.

Now, this is prime Trey Smith. Here he has a great active pass set where he shows a violent punch and solid base at the point of attack. He keeps his feet and hands moving and finishes the play. This is what 95% of his pass sets look like so it was hard to choose just one. He makes it look so easy for himself on a play to play basis which is why I think you see him fall asleep on some plays like the previous clip.

I’ll put my money down that you will not find a better combo blocker in college football this year than Mr. Smith. This is clearly his bread and butter. He moves so easily up to the second level and just eats up linebackers. His tape is littered with plays just like the 2 below.

We will finish up by letting Smith take you out to breakfast for some pulls and pancakes. While it’s not something I see him being asked to do on a consistent basis at the next level, he certainly shows he has the ability to finish the job when asked to do so.

Overall, I can see Trey Smith being a plug and play lineman in the NFL. I think he’s found his home at guard due to his heavy feet and below-average lateral mobility, but his versatility helps as you could play him at tackle if you were really in a pinch. There’s no reason this guy can’t anchor your offensive line for years down the road. You put him around some pro-caliber coaching and players that can make this guy see red on a play to play basis you’ll be cooking with grease.

Ultimately, Smith’s position value and medicals are going to be what determines his draft position. However, from what he put on tape, I’d be hard-pressed to see him getting out of the second round.