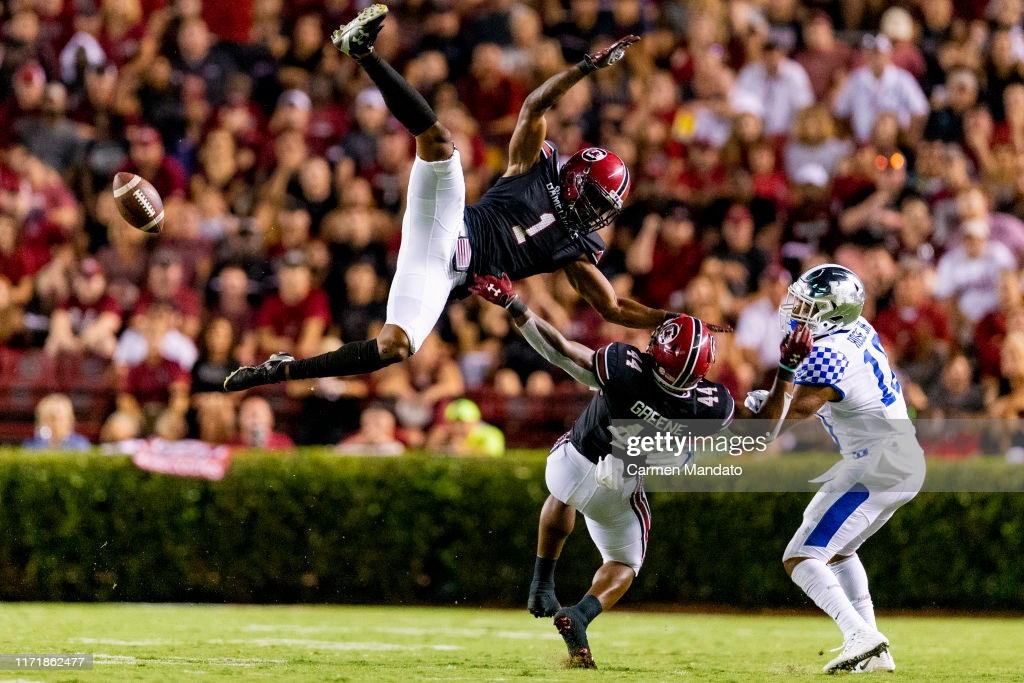 Heading into the 2021 NFL season, the cornerback position might end up being a bigger unknown for the Pittsburgh Steelers than expected.  While the position group had a strong year for the team in 2020 overall, there are a lot of question marks heading into the offseason.  Key pieces of the Steelers’ sub packages in Mike Hilton and Cameron Sutton are free agents, and starter Joe Haden turns 32 in April.  Opposite starter Steven Nelson should be returning, along with depth pieces such as Justin Layne and James Pierre (who had some impressive, albeit limited snaps in 2020).

With all that being said, the cornerback position is one that the Steelers might look to invest in during the 2021 NFL Draft.  There are some good corners in this draft class that might fit the Steelers mold.  A prospect I really like is cornerback Jaycee Horn from South Carolina.  I think Horn has the potential to be a lockdown corner at the NFL level, if he is drafted into a scheme that will allow him to play predominantly press man with zone mixed in.

Horn has the makings of a shadow corner written all over him.  With good size, length, and athleticism to pair with a fiery demeanor, Horn has attributes that are near impossible to instill in a defensive back if not already a part of their game.

However, like every player, Horn is not without flaw.  I believe he can further improve and polish his technique.  He can be more patient at times and keep himself square to the receiver instead of opening his hips and giving him somewhere to go.  I also think he needs to get lower at times when in his backpedal or shuffle, and if perfected this will allow him to excel at areas other than press.

He is definitely most comfortable when up in the face of the receiver and when he is able to get hands on as early as possible.  He plays the game with a tenacious attitude, and this fire is what will allow him to compete with top tier talent once he reaches the NFL.  If the Steelers want to solidify their future at the cornerback position, Jaycee Horn could be a possible candidate to do just that.

These first two clips depict some of Horn’s best traits: physicality and aggressiveness.  They are both from South Carolina’s 2020 game against Auburn, which was one of Horn’s best games in the entirety of his collegiate career.  The first clip depicts Horn playing to his strengths in press man coverage.  He is aligned with inside leverage and is able to use the sideline to his advantage.  The receiver at the top of the screen chooses an outside release, to which Horn gets both hands on him and ushers him out of bounds, completely erasing him from the play.

This is Horn at his best.  The NFL team who drafts him should put him into position to press receivers and utilize his physicality at the line of scrimmage.  He seems to be comfortable jamming with one or both hands when he sees fit.

The second clip displays his aggressiveness when it comes to defeating blockers and making tackles.  Auburn is trying to set up a quick screen to Eli Stove, but South Carolina plays it well.  Horn blows up the receiver trying to block him and proceeds to drop Stove at the line of scrimmage with some assistance from teammate Shilo Sanders (Deion Sanders’ son).

Horn has the traits needed to be an elite run defender and tackler at the NFL level, he just needs to display some consistency when it comes to tackling from a fundamentally sound standpoint.  Sometimes you will see him dive at a player’s legs or try to hit with his shoulder instead of wrapping up.  I think this is a willingness issue more than anything, and that further coaching at the NFL level will resolve said issue.

Moving on, this clip showcases an exceptional interception from the same game against Auburn.  Jaycee Horn plays his zone assignment effectively while reading the quarterback’s eyes in order to deduce where he is trying to go with the football.  This play displays intelligence, instincts, athleticism, and playmaking ability.  Before making a play on the throw, Horn stays with his assignment long enough to ensure that he won’t get beat deep.  He waits until the quarterback shows his hand, to which he is then able to leave his man and try to pick the pass off.

Plays like these are why I believe Horn is more than just a man corner.  If he further refines his technique, he will be able to play zone at a high level in the NFL.  He has the instincts and IQ to quickly process plays and properly position himself to get his hands on the football.  I think more plays like this are in Horn’s future.

This clip shows another great play from Horn but this time it’s in South Carolina’s game against Alabama in 2019.  Horn tries to bait Tua Tagovailoa into a throw to the flat that he would have been able to jump, but when Tagovailoa decides to lob a pass to the corner of the end zone instead of taking the bait, Horn is able to range back and get his hands on the pass which results in a near interception.  This is a great play from Jaycee Horn, and he makes it against NFL caliber talent.  From what I watched on film; Horn is an extremely effective red zone cornerback.

This clip is another play from South Carolina’s game against Alabama in 2019.  Jaycee Horn is covering current Denver Broncos wide receiver Jerry Jeudy on a crossing route.  As a cornerback, these routes can be extremely difficult to defend because you are being asked to keep up with a receiver across the width of the field.  Horn is able to display here that he has the speed necessary to do so.  With Jeudy having to navigate through traffic, Horn is able to catch up to him.  As he is a very physical player, Horn ends up making contact with Jeudy early and this results in a penalty flag.  This tendency to make contact with receivers past five yards is something that Horn will have to tone down in the NFL.

This is the final clip in this report from Horn’s game against Alabama.  Here, Jaycee Horn is covering 2020 Heisman Trophy recipient DeVonta Smith.  Horn is playing off coverage.

Horn’s off coverage technique is something I think he can work on when drafted.  If he is able to get lower in his backpedal consistently, this will help him move in a more fluid fashion and allow him to get even better breaks on routes without having to rely so heavily upon his athleticism.  He should bend more at the hips so that his chest is also leaning more forward, instead of standing upright when backpedaling.  If he is able to work on this area of his technique when drafted, he will find himself becoming more comfortable in off coverage for both man and zone, and this will make him an even tougher opponent to attack.

While I think he could be a bit lower in this clip specifically, he does a good job of staying square with Smith and bursting towards the in-breaking route.  He closes the space between him and Smith quickly and plays through his hands to try and dislodge the ball, resulting in an incompletion.

The last clip for this report is from Horn’s 2019 game against Georgia.  Here, Horn is utilizing a bail technique.  As the ball is snapped, he immediately begins to side shuffle backwards into his zone third, giving wide receiver George Pickens a bunch of open space to work with.  As you can see in the clip, because Horn is keeping everything in front of him, wide receiver Pickens is able to sit down on the curl route just past the first down marker for an easy completion (it looks like Horn should’ve had some zone help from #44 Sherrod Greene but that he bit on the play-action or the threat of a leaking receiver to the flat).

What caught my attention from this clip is something I have already discussed; I believe Horn’s technique can be further refined when playing off of the receiver.  Horn is not at fault for this completion, and he actually does a good job of ensuring no extra yards for Pickens, but as I stated in “the bad” section and throughout the rest of this report, he can definitely work on getting lower when backpedaling or shuffling.  This is more nit-picking than anything though.

Most notably, I think this clip shows why Horn should be asked to play press coverage far more often than he’s asked to play off coverage.  In a Cover 3 situation as seen in the clip, it is hard for corners to drive on routes that are underneath if they are utilizing a bail technique, especially if the lower level defenders are pre-occupied with the threat of a run due to play-action.  If Horn’s not at his best when playing off coverage, I don’t think he should be asked to do this very often in the NFL, at least until he further polishes his technique.

Jaycee Horn is an extremely intriguing cornerback prospect.  While I do not expect him to be the first cornerback selected in the 2021 NFL Draft, I think he has the potential to have as much success throughout his NFL career as highly coveted players such as Patrick Surtain II and Caleb Farley.  The Steelers will likely have greater positional needs than corner, but I think Jaycee Horn is a player that could be on the minds of Steelers’ brass if available at pick #24.