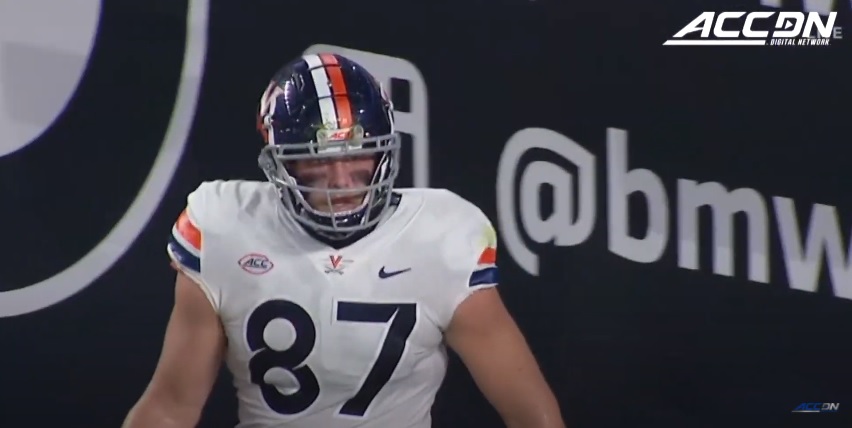 – Rare frame for the position, great size and length, looks every bit his listing
– Plus hands, reliable safety valve, adjusts well to balls thrown outside his frame, good body control
– Finds and tracks the ball well over his shoulder
– Impressive in pass pro, good anchor and strength, holds up better than most TEs
– Size able to create movement as a run blocker, washes down defenders on down blocks and has size to compete as an in-line blocker
– Experience as a traditional “Y” tight end, spent lots of time lined up in three-point stance
– Good production, even against better competition, and frequently found the end zone, weapon inside the 20
– Still new to the position, room to grow
– Potential to be used as gadget player given QB background

– Rigid athlete, struggles to explode out of cuts, best in a line and definitely a build-up speed player downfield
– Limited big plays and doesn’t do much after the catch, size allows him to fight and fall forward but doesn’t break tackles and won’t make plays in space
– Most vulnerable to speed rushes/DB blitzes in pass pro
– Runs tall because of height, easily jammed and rerouted off the line and into his pattern
– Too often slow/late out of his stance in the passing game
– Falls off blocks in run game, not as good as size may suggest, and has trouble sustaining through contact, can struggle with leverage because he’s so tall
– Can improve as he learns the position but ceiling isn’t high

The Steelers like their tight ends to be big and old-school, at least when drafting them, and on paper Tony Poljan fits that well. I mean, look at this picture. Dude just screams future Steeler. And a former MAC dude turned Virginia Cavalier too? Write the pick down in pen.

On a more serious note, let’s check out Poljan’s game. His best trait may honestly be the job he does in pass pro. Few college TEs are involved in protection schemes. Even fewer actually do it well. Poljan does. In the first clip, Poljan is at the top, in the second he’s at the bottom, and again at the top for the third.

Though because he isn’t great laterally, he is vulnerable to being unable to seal the edge by DB blitzes. He’s better anchoring and handling power/bull rushes from linebackers and smaller DEs.

Poljan is a sure-handed safety blanket for his QB. Not many big plays downfield, won’t do much after the catch, but he shows good body control and ability to catch outside his frame.

But Poljan is an extremely rigid athlete who won’t create separation and struggles in space. He’s one of the stiffer prospects I’ve seen at the position, which isn’t a major surprise given his unusual frame, but he’s slow out of his stance and changes directions like an oil tanker. The first clip below tells the whole story. Poljan lined up to the bottom and dude is barely moving off the line. To be fair, he might have been a little winded (Virginia had recovered a fumble on a punt, keeping the drive alive) but this dude ain’t blowing by anyone in the NFL.

Poljan is best when running down the seam as a build-up speed guy who can use his size, hands, and ability to track the football. And he’s a reliable target on underneath curl/hank routes to defeat zone coverage. Anything else and he’s going to struggle.

Poljan also isn’t nearly as strong as a run blocker as I would’ve hoped. At his frame, you’d think he would be excellent at it. But his height and lack of leverage can hinder him and he has trouble sustaining blocks, especially in space. In the first clip vs Miami, he’s the Y to the bottom of the screen, losing the down block on this gap run.

Poljan functions best as a #2 tight end who can win in the red zone/end zone. He did find paydirt a lot in school. Touchdown every seven receptions is impressive, better ratios than guys like Brevin Jordan or Hunter Long. But his ceiling isn’t tremendous and while he has to improve as a blocker, I could see some coaches try to convert him to offensive tackle.

On the high end of things, I see a Scott Chandler/Darren Fells/Levine Toilolo comp. On the low end, an Eric Tomlinson/Troy Niklas.