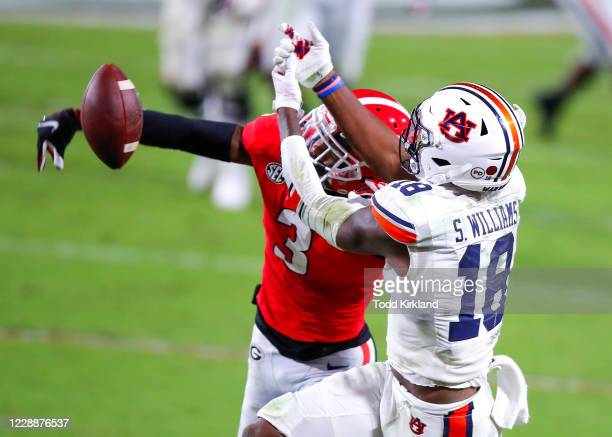 Campbell had a great matchup against Auburn receiver Seth Williams earlier in the season with both players having their share of success. On this play Williams runs a fade route down the sideline against Campbell. Campbell draws a flag for defensive pass interference on the play. In my opinion Campbell’s biggest weakness is his inability to play the ball in the air.

Campbell does a good job of being in phase against Williams. The ball was underthrown and Williams goes through Campbell to make the play. Once Campbell is in the hip pocket of Williams he should be looking back for the ball. On this play he would have had a chance to pick it off and take it back the other way.

Later in the game Campbell is aligned on Auburn sprinter Anthony Schwartz in man coverage. As Schwartz motions across the formation Campbell does a good job negotiating traffic to be in a position to make the play. Campbell shows off his athleticism and makes a great tackle to prevent a touchdown.

On this 3rd and 10 Campbell is aligned against Williams in the slot in press coverage. Campbell again does a nice job of staying in phase with Williams but is unable to make a play on the ball.

Campbell is in good coverage, the ball is thrown to the back shoulder and Campbell misses the ball with his right arm.

It really was a spectacular catch against Campbell but with coverage that tight it’s one he would have been disappointed to give up.

On this last clip from the Auburn game, Campbell is again matched up against Seth Williams.

The Tigers attempt a 1v1 fade ball against Campbell who does a nice job defending the play. Georgia were comfortable all year matching up Campbell in 1v1 coverage against any receiver they faced. He did a solid job in man coverage when his number was called and this is one of his biggest strengths.

Campbell does a much better job of locating and making a play on the football on this play. Although Williams has a step on him, Campbell’s speed allows him to get back into a position where he can make the play.

On this play against the Bearcats in the Peach Bowl, Campbell is aligned over the TE to the boundary. During the play the QB breaks contain and Campbell does a great job locking up the closest receiver to him. He gets in phase and makes a good play on the ball on 3rd and long.

Campbell’s technique here is awesome. He uses his right arm to secure the receiver and his left to swat the ball away and force 4th and long.

On the next play Campbell is aligned in press technique against the Heisman trophy winner Devonta Smith. Campbell does an excellent job of staying in phase and completely taking away Smith on the play. Campbell reroutes Smith who initially aligned on the hash mark. The ability to line up in press and hold his own against the best receiver in college football will have done great things for his draft stock.

On this 3rd down against Alabama, Campbell is matched up on Sophomore receiver John Metchie who is aligned in the slot. Campbell initially loses leverage at the snap but manages to recover and separates Metchie from the ball. Campbell shows his versatility on this play against a player who is likely to be first round selection once he declares for the draft.

Campbell shows great quickness breaking on the ball, using his long arms to cause the incompletion. These are the plays that have pushed Campbell towards the first round.