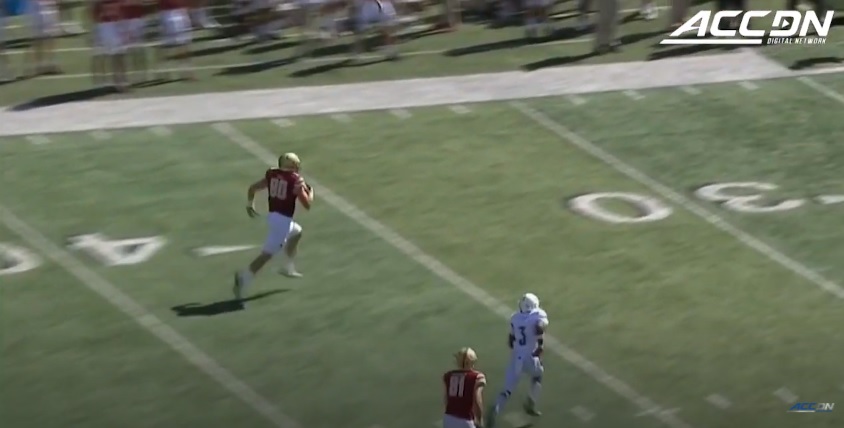 – NFL size, well-built frame and possesses good length
– Pro-style offense and usage, lined up plenty as an in-line tight end, involved in run blocking and pass protection
– Length is an asset in the run game, good leg drive and decent upper body strength
– Takes pride as a blocker and above average for the college game, works hard and plays to the whistle
– Capable of adjusting to passes thrown outside his frame, better on catches low and away than over his head
– Versatile and lined up around the offense, ran diverse route tree
– Finds soft spot in zone coverage, makes himself open
– Productive career, got better every year

– Average in most areas, lacks standout trait
– Marginal athlete, lacks burst and separation and break point and struggles to create space vs man coverage, stiff-hipped and takes extra time to break down and cut
– Pops up too high out of his stance and runs too tall downfield, makes him vulnerable to getting jammed and pressed early in his route
– Inconsistent catches in traffic, flashes good hands but won’t always make contested play and seems to struggle more with passes thrown over his head
– Doesn’t offer much after the catch, can use size to bury ahead but won’t make anyone miss in open field and doesn’t break many tackles
– Most effective routes came underneath, not vertically
– Can fall off as a run blocker, trouble sustaining base blocks
– Limited upside
– Wasn’t an every down player

Long is widely considered to be in Tier 2 or Tier 3 of this TE class, signaling the clear drop off from the top names in this class like Kyle Pitts and Pat Freiermuth. Long is a different type of a player. More of a do-it-all than Pitts, whose a big receiver and vertical threat.

That’s not Long. And it’s no surprise. In Boston College’s pro style offense, tight ends have a Steelers-feel. They line up in three point stances, they’re attached to the line, they’re involved in pass protections. Long has worn all those hats and he’s serviceable in basically all those areas.

Long also has a good feel for finding the soft spot in coverage. In both these clips, he’s able to settle between two defenders. Especially like the first one. Scramble drill, Long finds grass, and makes the catch in traffic.

I like his effort as a blocker. Decent strength, good length, and keeps his legs driving. Out on the edge here, riding the linebacker down the line.

But Long is a rigid athlete and route runner. He runs too tall, pops up too high out of his stance, and he won’t create much separation against man coverage. Tries a stick-nod double-move in the red zone. But he gets jammed out of his break and creates no space. And in the second clip, he creates no space on this over route.

In that respect, he reminds me a lot of Zach Gentry. Build-up type player who can use his size and frame on vertical routes (seams and overs). But ask him to change directions at a 90 degree angle and he’s not going to win too often.

On the high end, I can see a Nick Vannett comparison. #2 tight end, never a starter. But – and this is an easy comparison to make – I compare him to former Boston College Eagle Tommy Sweeney, a 7th round pick of the Bills in 2019.

Games Watched: vs North Carolina, vs Georgia Tech, at Virginia