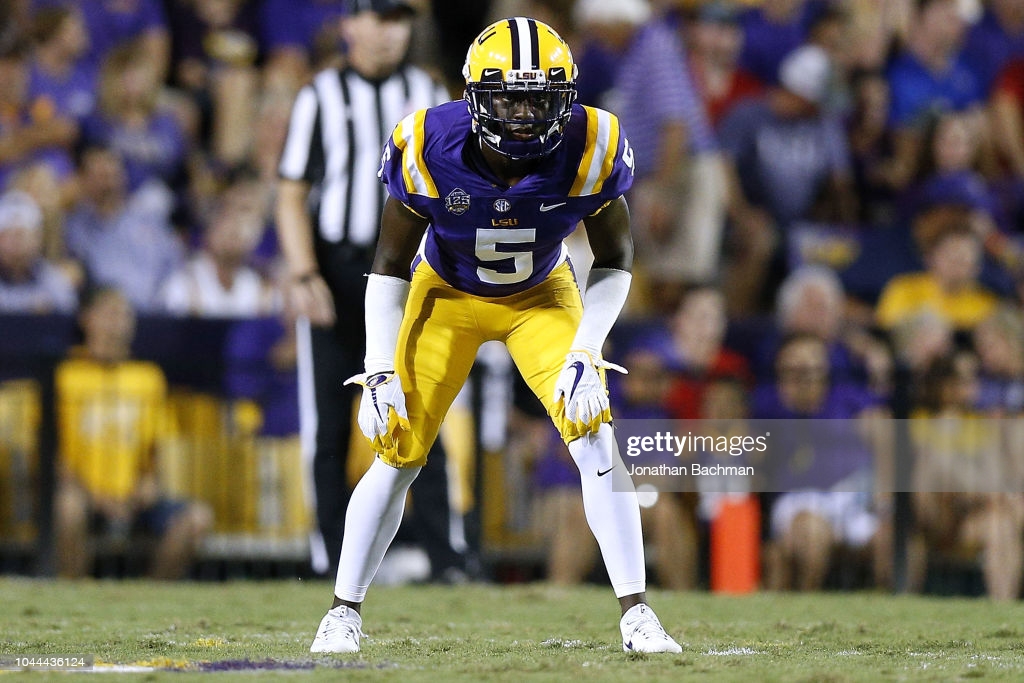 Although a much more underrated team need heading into the 2021 season, cornerback remains a position of minor draft need with the likely departure of Mike Hilton, as well as the uncertain futures of Cameron Sutton and Joe Haden.  Particularly, I believe the team will look toward prospects with slot versatility in their quest to replace the valuable contributions of Mike Hilton.  The first to appear on my radar was Kary Vincent Jr., who sat out the 2020 season, but was a swiss army knife on LSU’s National Champion 2019 unit, as well as reportedly being the fastest player on the talented squad, per the team website.

Although never serving as a full time starter at LSU, Kary Vincent Jr. served a similar role to that of Mike Hilton in Pittsburgh, playing primarily as a Nickel defender, while simultaneously splitting duties at the safety position.  Vincent Jr.’s speed, which helped him place 11th in the NCAA’s 100 meter dash in 2018(10.07 seconds), is apparent on film immediately, allowing him to carry receivers downfield with relative ease.  Here, Vincent Jr. blankets Ceedee Lamb on an out and up double move out of the slot, showcasing great patience and eye discipline to play through the receivers hands and secure a downfield pass breakup.

The Steelers scheme, which requires advanced post snap coverage rotations from it’s safety’s and Nickel defenders, often requires the Nickel player to carry the deep 1/3 in inverted Cover 3 sets, a role which Mike Hilton flourished in.  On this rep, Vincent disguises his alignment before rotating to occupy the deep 1/3 zone as the snap, and showcasing his range to get off the hashes, track the ball in the air, and high point the football to secure a beautiful interception on a well crafted trick play by the Jalen Hurts led Oklahoma Sooners.

One elite trait of his game is his route anticipation, particularly against out breaking routes, where he routinely stays square, before using his physical keys to beat receivers to their landmark.  On the first rep, with Ole Miss threatening a comeback, Vincent Jr. stays square off the snap, utilizing catch technique to perfection, before getting hands on the intended receiver, using his speed to undercut the seven route, and showcasing his leaping ability to attack the ball at its apex, transitioning quickly to return the pick for 40 yards.  On the next rep, against Texas A&M, he aligns with heavy inside leverage against the slot receiver, virtually daring him to run an out breaking route, before remaining patient, using his speed to match the seven route step for step, and playing through the receivers hands at the catch point to secure an impressive pass breakup.

Kary Vincent Jr. is an explosive athlete, and it repeatedly shows on film.  Here, against Ole Miss, he is able to quickly transition out of his break, close on the flat route rapidly, and convert speed to power, decleating the receiver with an impressive form tackle.  On the next rep, against Oklahoma, he is deployed in a man coverage assignment over the slot receiver, showcasing his elite athleticism to evade a natural pick route before closing on the receiver to the flat, and forcing him out of bounds after a short gain to force a third and long attempt.

In coverage, Vincent Jr. has his fair share of struggles with eye discipline, often suffering from “high eyes” which allow receivers to manipulate him with head fakes at times.  Here, aligned over the slot against Ceedee Lamb, he bites hard on the slant action, allowing Lamb to create significant separation working toward the sideline on a whip route.  Furthermore, as he tracks the receiver toward the sideline, Vincent Jr. fails to take a proper angle to the receivers back hip, ultimately leading to him whiffing on the tackle attempt and allowing extra yards after the catch, an issue which shows up too often in his tape.

Finally, later in the same game against Oklahoma, Vincent Jr. is once again aligned in a man coverage assignment over the slot receiver, biting hard on an outside release off the snap, and allowing the receiver to create inside separation on a pivot route.  Even more concerning, after tracking the receiver down, he provides a half hearted attempt to bring down the receiver, lacking desired physicality in the process, and creating room for the receiver to rumble into the endzone.

Overall, Kary Vincent Jr. has the potential to contribute immediately for whichever team drafts him in sub packages, where his man coverage prowess and elite ball skills will allow him to create splash plays.  Although he filled a variety of roles for the Tigers in his career, I believe that Vincent Jr. will be best suited at the Nickel position in the NFL, where his man coverage talents could be maximized, and his open field tackling woes will be less exposable.  That being said, in Pittsburgh, which often opts to sub their strong safety for a Nickel defender in base sets, Vincent Jr. ‘s experience at safety could make his transition into their scheme an ideal fit.

On the high side of things, I’d compare Vincent Jr.’s ceiling to that of Nickell Robey- Coleman, in that they are both players who excel through their sticky man coverage and desired physicality, yet have some obvious physical limitations.  That being said, Nickell Robey-Coleman clocked at a 4.53 40 time, and if Kary Vincent Jr. ‘s 10.05 100 meter dash time is any indication, he will likely clock somewhere closer to the 4.3 range.  While lack of boundary cornerback experience certainly limits Vincent Jr.’s ceiling, he could serve as a potential replacement for Mike Hilton in the slot, while competing for sub package work, and helping on special teams during his rookie campaign, which makes him an intriguing day three prospect for Pittsburgh.