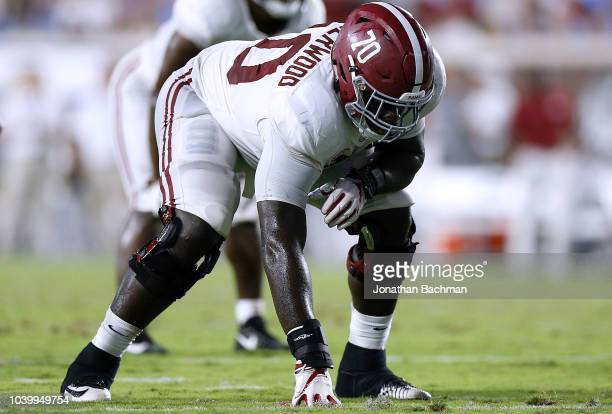 -Powerful run blocker with great length
-Impressive footwork for a man his size; fluid lower half
-Climbs to the second level well and has a solid hit rate
-Long arms and massive hands to keep defenders at bay in pass protection, and control defenders in the run game
-Good lower half power to anchor in pass protection
-Handles stunts and twists with ease
-Versatile player with experience playing inside

-Can get caught shooting his hands too early in pass protection, leaving him vulnerable to quick counters
-Has a tendency to slide off of defenders in the run game
-Lots of reps on tape where he’s caught standing around
-Slow to react against counter and can get caught lunging
-Had a high pad level at times and will need to focus heavily on technique to not bend at the waist at times

Any other year we’re probably talking about Alabama left tackle Alex Leatherwood as the consensus No. 1 tackle in the draft class. Unfortunately for him, he graduated and ran out of eligibility in a year in which the offensive line class – specifically tackle – is loaded leading up to the 2021 NFL Draft.

Knowing that, Leatherwood might slip down some boards, but man is he going to be a steal.

Standing 6’5” (listed 6’6” but I have a good source telling me he’ll measure closer to 6’5”) and weighing 312 pounds, Leatherwood moves so well for his size and has an exceptionally fluid lower half, allowing him to climb to the second level with ease, handle speed rushers and pull in the run game.

When he gets moving in the run game, he knows how to finish

Here against Georgia in 2020, Leatherwood does an outstanding job flipping open his hips to turn and run on the quick toss, getting out in front of star running back Najee Harris to clear a lane, burying Georgia linebacker Channing Tindall.

I love the footwork to open up and run, and I love the ability to flat-out finish in space.

Leatherwood has a high hit percentage when asked to climb to the second level, and when he does in the run game he has the ability to latch on and run his feet, dominating small linebackers in the process.

I love the ability he shows to square up to the LSU linebacker, latch on with his mammoth hands and then run his feet, putting the linebacker on skates, helping Harris coast into the end zone.

He has very little wasted movement when climbing to the second level, takes great angles to ensure he’s going to make contact with his target, and he simply never stops his feet, always looking for the pancake.

Look at this rep here against Auburn last season. He does a phenomenal job adjusting his route as he climbs, latching onto the linebacker and running him 15 yards downfield.

I know I wrote in the bad section that he can get caught standing around on tape quite a bit, but I think that had more to do with scheme, asking him to climb to the second level and seal off the backside on runs, or moving the pocket around with no defenders in sight.

I rarely saw him seek out contact in those instances, but when he did, oh my.

Talk about eating some ribs. That’s some serious short-area power from Leatherwood, throwing this defensive lineman to the side.

On tape I was really impressed with the way he handled stunts and twists. He has good awareness of what’s going on around him and never works himself out of position with his drag hand, allowing him to seamlessly pass off stunts and twists.

He does a great job against the Auburn twist, walking the outside defender into his inside help before then resetting his depth to better handle the twist.

The one area I have concerns with Leatherwood is his tendency to shoot his hands too early in pass protection, leaving him vulnerable to counters, which then causes him to lunge.

Watch him shoot his hands here too early in 2019 against South Carolina, opening him to a quick inside counter as the pass rusher swipes his hands away, leading to the early presser.

I really believe Leatherwood is in the discussion for OT2 in this class behind Oregon’s Penei Sewell, but with his struggles in pass protection it will drop him slightly.

He’s best suited to head to a team that emphasizes the run game and wants a physically dominating run blocker at tackle.