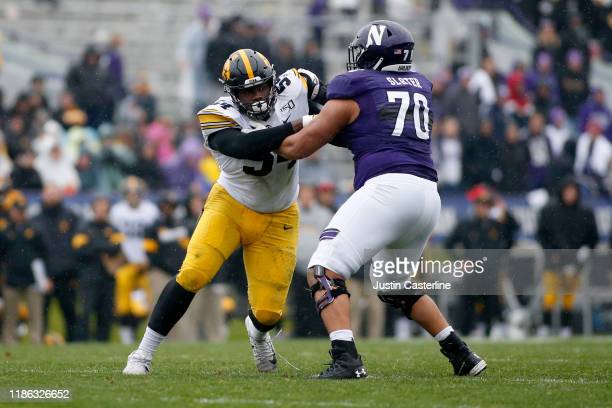 -Great feet to gain depth on pass sets and handle pass rushers
-Displays adequate power overall to drop anchor; sits into hips well
-Climbs to second level with ease and has athleticism to change trajectory on the fly
-Comfortable playing all along the offensive line
-Smart, instinctive lineman that handles stunts and twists with ease
-Plays with overall power and control; natural leg bender that plays in control with his feet under him, rarely off balance
-Best suited for zone blocking scheme to utilize his athleticism

-Tends to shoot hands early, exposing his chest to defenders
-No true defined position; feels like a ‘tweener at tackle and might be best suited for inside in the NFL
-Arm length is a concern overall, especially against longer pass rushers off the edge
-Opted out of 2020 season, losing a full year of development

If there is one player in the 2021 NFL Draft class that could have afforded to sit out an entire season with no new tape, it’s Northwestern offensive lineman Rashawn Slater.

The Texas native put out some impressive tape in 2019, showcasing his ability to flip from right tackle – where he started 26 straight games – to left tackle and actually looked BETTER.

That’s remarkable in its own right.

However, Slater is a bit small for a tackle at just 6’3”, 305 pounds, which had led to the discussion to kick him inside to guard or center where he could really thrive with his athleticism.

I don’t think it matters where you put him though. He’s just a smart lineman that understands angles and is impressively athletic for his size.

As a run blocker he’s not overly powerful, but he has good technique, throws his hands well at the point of attack and generally executes his assignment. Plus, he just has great awareness and knows when to peel off blocks to pick up the free man.

This is just a great job by him in 2019 on the road against Stanford, peeling off to pick up the free linebacker, creating a hole for his running back.

I’m very high on Slater’s ability to climb to the second level with speed and power, latch on to linebackers and run them down the field.

This is one current Baltimore Ravens linebacker Malik Harrison, who was a good run defender in college.

Look at the explosion out of Slater’s stance, and look at his ability to adjust his trajectory and cut off Harrison, latching on and running him up the field. That’s some impressive stuff.

In pass protection, I like the way Slater gets depth in his initial kick. He does a great job getting vertical in pass sets and does well to sit into his hips and anchor against pass rushers, stalling any type of pass rush, allowing him to win the rep.

I saw this same type rep from current Cleveland Browns left tackle Jedrick Wills Jr. last season, so seeing this from Slater is so darn impressive. He moves so well overall and makes this twist look easy from the left tackle’s perspective.

He covers a lot of ground on his inside jump set to cover for the inside gap, and then packs some serious power in his punch when he counters back outside to cut off the looper.

Play that one as his top highlight once his name is called in late April.

My only real concerns with Slater are his size and his tendency to shoot his hands early, leaving him very vulnerable to longer pass rushers that can get into his chest and overpower him, or swipe away his hands and win with counters.

Here against Ohio State in 2019, he shoots his hands early against the pass rusher and leaves himself vulnerable to the great wipe by the pass rusher, who then wins inside with ease for the pressure.

He doesn’t overextend whatsoever, but when he shoots early and misses, he doesn’t have the overall length to clean up his mistake quickly.

Against Ohio State in 2019, I thought overall he handled Chase Young well. They weren’t matched up a ton, but Slater didn’t have much trouble with him, aside from this rep.

Slater opens his chest up too early to shoot his hands, leaving room for Young to throw a vicious strike to the chest, stunning Slater backwards into the pocket. That said, Slater does an awesome job recovering on the rep, sinking into his hips and dropping the anchor to hold Young at bay long enough for the throw to get off.

Overall, I think Slater would be a terrific guard in the NFL in a zone-blocking scheme where he can win laterally and vertically against defenders in the run game. Add in the fact he won’t be left on an island in pass protection, and we could be looking at a perennial All-Pro type guard for the next 8-10 years.

It’s all about the right landing spot for Slater, which isn’t saying anything new for any prospect. Landing in the right scheme with the right coaching could really unlock his immense potential though.