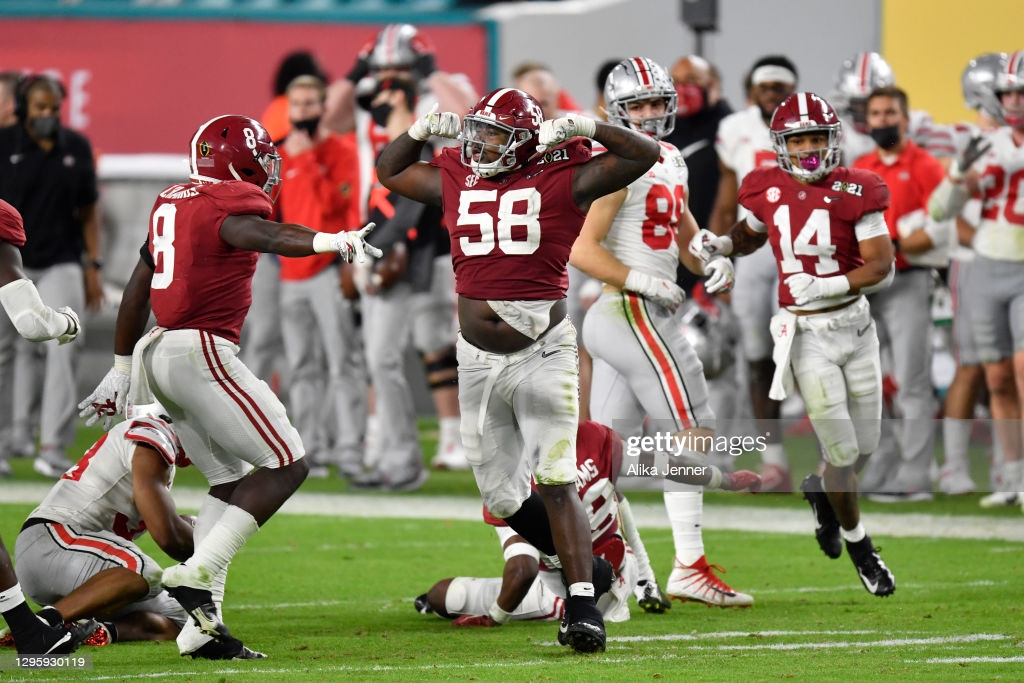 Barmore enters the draft after his redshirt sophomore season and I believe he’ll be just 21 when the NFL season starts.  He is a versatile defensive lineman who lined up all along the Crimson Tide front from the 0 tech over the center out to the 7 tech rushing off the edge.

Against the pass, he displays solid initial quickness at the snap, good leverage and very good hand placement.  He gets good depth with his first step and gets he hands under the blockers shoulder pads to stand them up. He has good lateral agility able to skip over gaps to the left or right to put stress on a blocker who may not have been expecting him. He varies his pass rush with double chops and cross chops and at times used clubs, rips, stabs and hump moves. He has good play strength allowing him to get solid push on bull rushes.  Once he gets a lane to the quarterback he has good acceleration to get to the ball quickly. He was often used as the penetrator and looper on stunts and twists and when the pass rush isn’t getting home he consistently gets a hand up in the throwing lane. He showed solid awareness on screens to flow to the ball.

Vs Georgia, Barmore (58) is lined up as the 3 tech across from the right guard. At the snap he will cut rightand bull rush the center and goes over him to lunge for the QB to force the fumble.

Vs Notre Dame, he is the 4i tech inside the right tackle and will show off his agility shooting to his right to the A gap and rip through the right guard to apply pressure.

Vs Notre Dame, he is the 3 tech outside the right guard. He shows quickness and agility to the inside with a club/swim move to get in the backfield for the sack.

Against the run, Barmore also shows his versatility.  He has enough quickness to get into a gap and disrupt running lanes while playing in a 1 Gap scheme. Or he uses hand placement, strength and leverage to stack and shed blockers while playing in a 2 Gap scheme. He has active hands and displays good effort to work through blocks. He has solid agility to slide with the play and plays with his eyes in the backfield on the ball. Shows good mental processing to swim over blockers who fire out low and is a strong tackler when he gets his hands on runners.

Vs Georgia, he is lined up to the left over the right tackle. He uses his hands to stand up the blocker and then yank him out of the way to make the tackle.

Vs Ohio State, he is the 1 Tech between the left guard and center. He absorbs the combo block pushing the center off of him and when the guard releases he moves back to his right to find the ball and make the tackle.

His initial snap quickness varies from good to being the last defensive lineman to move after the snap though was much better later in the season. Alabama ran a lot of stunts and twists where his job was to help others get free limiting his one on one pass rush opportunities. He lacks the ankle flexion and bend to get around the edge and flatten to the QB. Against the run, he needs to disengage from blocks quicker; there were plays where he was just a tad late.  He shows adequate chase on runs that go away from his side of the play. He has frame to add strength and weight to improve his anchor versus double teams an in goal line situations.

Overall, there is a lot to like with Barmore. He is young and his game is still growing. You could see the improvement over the course of last season. He has versatility to play anywhere along the line but would fit best inside playing from the 0-4i tech positions. He can play in 1 or 2 gap schemes and he will provide as pass rush from the inside which is so critical in today’s game. He has room to grow technically and physically and should be a strong contributor immediately.

Defensive tackle isn’t the biggest need for Pittsburgh but it is a need and they do like younger players in the earlier rounds. If they go defense, Barmore should be under consideration.