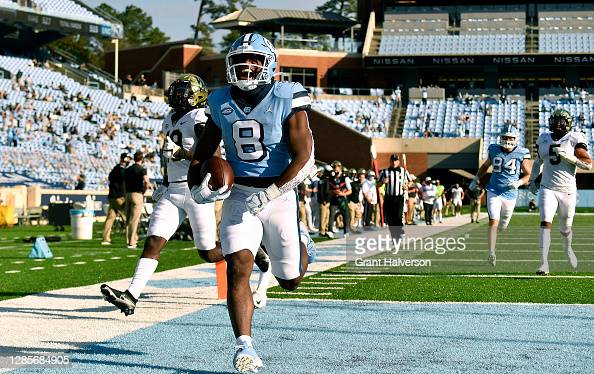 -Solid, well-proportioned frame for the position
-Problem solver as a back that can create on his own
-Impressive footwork that allows him to find the right track quickly
-Loves to run between the tackles and doesn’t feel rushed to bounce runs to the perimeter
-Shifty RB in the open field with good contact balance and later explosiveness
-Very good vision overall
-Possesses high-end stop/start ability
-Accomplished pass catcher with legitimate home run capabilities
-Deceptive power as a runner

-Feels a bit small at 5’9”, 199; measurements could dock him
-Broke out late at UNC, was that due to scheme and talent around him? Much different back than 2019
-Limited route runner overall; not as well-versed in usual route tree for position
-Rarely asked to pass block and doesn’t have the power overall to hold up in protection
-Feast or famine running back that struggles in short-yardage situations due to chaos
-More of a body catcher of the football than a natural hands catcher

If you’re in the market for a running back in the 2021 NFL Draft and you don’t want to spend a premium draft pick on one, waiting around in the middle of Day 2 for North Carolina standout Michael Carter might just be one heck of a move for those patient general managers.

Pairing with another standout Tar Heel running back in Javonte Williams for two years, Carter made a name for himself overall, turning in one of the top overall season’s at the position in college, according to Pro Football Focus’s grading criteria.

Carter was more lightening to Williams’ thunder at UNC, providing the Tar Heels with a legitimate home run threat every time he touched the football.

He might look small on paper, but he has a well-built frame and handles punishment between the tackles well. Plus, he has a key trait for the position in his ability to problem solve with the football, creating something out of nothing often.

Against South Carolina in 2019, Carter saw pressure right in his face as soon as he received the handoff. I like that he didn’t panic, dropped his pad level to make him a smaller target early on, and slithered through the line of scrimmage to clear the first level of the defense.

After that, he shows his ability to make defenders miss and turn on the jets.

I’m very impressed with Carter through the sheer fact that I never see panic with him when he touches the football.

Add in the fact that his vision is top notch, and well, you get plays like this.

In his 308-yard game against the Hurricanes, Carter carved up the defense left and right. I like the way he sets up the defender here, drawing him into the unoccupied hole, allowing him to split his two blockers to the second level, where he makes two guys miss and walks into the end zone.

There’s no panic. He thinks two and three moves ahead and just glides all over the field.

His stop/start ability is next-level. You don’t see this often in running backs, but when a back has this innate ability to stop on a dime and explode back up to top speed quickly…look out.

The second clip is from 2019 in the bowl game against Temple. Look at how he comes to a complete stop following contact and then is able to explode forward and make a defender miss.

In the first clip, which is from 2020 against North Carolina, he shifts his weight around easily and just explodes forward without any effort after coming to a near stop.

That’s a deadly weapon for a running back, especially one who has so much space to operate with in a spread system.

One area that needs improvement overall with Carter is as a pass catcher. Yes, he produced well at UNC in the spread system and did well after the catch, but he’s not a great route runner overall out of the backfield and isn’t a natural hands catcher.

However, he can make plays like this when the play breaks down, tapping into his home run speed to take the top off of the defense on a simple wheel route.

There’s not many in the class that can do that.

If Carter can develop as a true pass catcher at the next level, he could really become a high-level weapon in a two-back system.

He can’t handle the overall workload of a true No. 1 back, but he can be a dynamite complimentary, change-of-pace back in the right system. The speed, vision and power are there, as is the ability to create on his own.