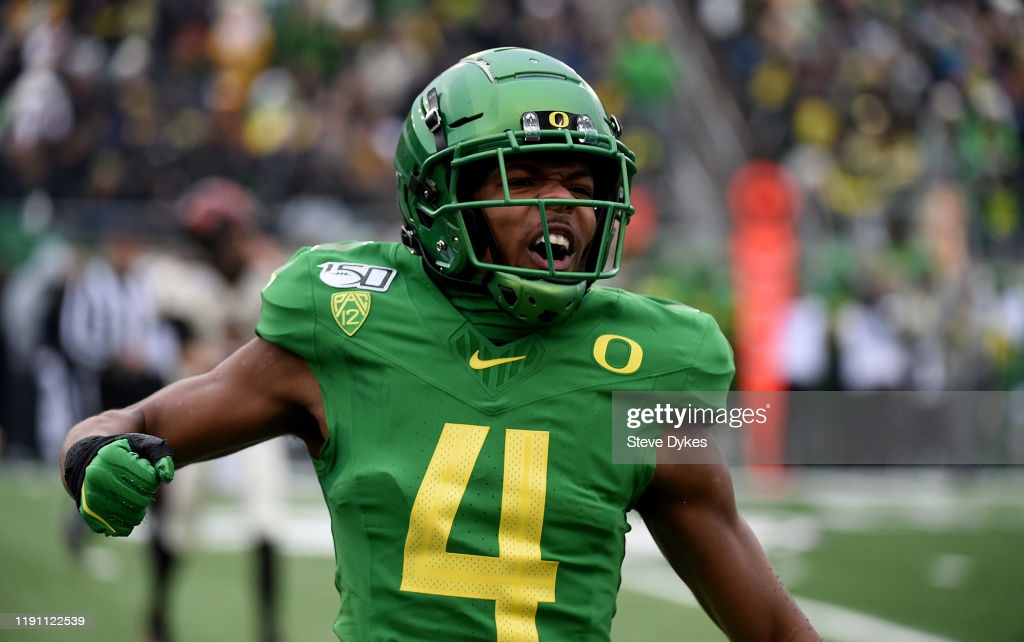 With both Mike Hilton and Cameron Sutton, the Steelers two best sub package cornerbacks, set to hit free agency, I have been looking to profile potential replacement fits at the Nickel position.  Next up is Thomas Graham Jr., a three year starter out of Oregon, who despite his perceived lack of desired size, I actually believe profiles better as a boundary cornerback at the next level.  Despite lacking the athletic tools and upside of the class’s top prospects, Graham Jr. enters the 2021 NFL draft possessing refined coverage skills, with proficiency in both press and off coverage alignments, along with elite instincts in shallow zone assignments.

The predominant trait which jumps off the tape with Graham Jr. is his hip fluidity, which allows him to match receivers in press coverage with ease.  Although he has shown the ability to jam receivers off the line with physicality, some Graham Jr.’s best reps come when he deploys a mirror press, relying on his eye discipline, foot speed, and hip mobility to match receivers off the line.  Below, on a fourth down attempt against Utah, he shows great patience to stay square off the snap, waiting for the receiver to declare before flipping his hips effortlessly, getting to the receivers upfield shoulder, and undercutting the route to secure an impressive pass breakup.

In addition to desirable hip mobility, Graham Jr. routinely displays advanced football IQ, understanding not only his own assignments, but the broader coverage schemes, allowing him to take calculated risks.  In his final college game at the Rose Bowl against Wisconsin, Graham Jr. once again mirrored the slant route of the line with a mirror press before matching the receivers inside stem with outside leverage, allowing him to play with vision on the quarterback, understanding that he had inside help.  With the vision he gains from playing with outside leverage, Graham Jr. is able to take advantage of an overthrow, securing the timely interception and returning it 24 yards in the process.

While he often opts to deploy a mirror press in press coverage reps, here, guarding a tight end in the red zone against Stanford, Graham Jr. matches the receivers release with his feet before using physicality to squeeze his man to the sideline.  Once again displaying his football IQ, Graham Jr., understanding that he is likely to be targeted in a jump ball situation, and provides the receiver no room to get his feet down in bounds, while also playing up through the receivers hands at the catch point.

While he is arguably at his best when deployed in press coverage, Graham Jr. does a good job on tape of playing around with his alignments, here aligning in off coverage on a possession down, anticipating quick game concepts.  At the snap, Graham Jr. displays great patience, using his read steps to match the receivers tempo off the line before displaying impressive click and close out of his break, and arriving at the catch point with physicality to halt the receiver a yard short of the sticks.

While Graham Jr. is certainly at his best in man coverage at this stage of his career, he has displayed great presence in underneath zone coverage assignments, such as the rep below, where he operates out of a pattern match assignment against Auburn’s bunch set.  Once again playing from depth, he stays patient in his pedal, allowing the bunch to sort its route distribution, before using an efficient T-step break to undercut the hitch, securing an impressive diving interception.

Although his work in coverage has solidified his status as a legitimate draft prospect, Graham Jr. is no slouch against the run, serving as a particularly effective run defender when he is able to stay clean and make tackles in space.  Below, against Auburn’s wildcat formation, he matches his man’s inside release off the line before diagnosing run, flipping his hips effortlessly, tracking the back down with a perfect angle, and wrapping up low to secure an impressive stop short of the goal line.  On the next rep, from earlier in the same game, once again defending wildcat, Graham Jr. is able to stay patient, slipping inside of a lead blocker, staying square, and shooting low to secure the tackle.

Although Graham Jr. possesses the necessary physicality and desire to provide adequate run defense at the next level, he struggles in the run game at times due to his lacking stature.  On the first rep, serving as the overhang defender to a nub tight end set, he steps up to fill off the edge, but fails to maintain his proper outside leverage, and subsequently gets sent into the dirt by a stiff arm courtesy of Utah’s Zach Moss.  Earlier in the season, against Stanford, who made a concerted effort to run in his direction repeatedly, Graham Jr. attempts to set a hard edge in contain, but ultimately gets overpowered by a stalk block, losing contain and allowing the back to beat him outside for a first down gain in the process.

Although it’s tough to find faults in Graham Jr.’s coverage tape, the one minor issue which shows up consistently is his propensity to “open the gate” too early in his press coverage work.   Below, against Stanford, the receiver stems outside with a diamond release, causing Graham Jr. to open his hips toward the sideline, and subsequently allowing the receiver to quickly cross his face underneath, creating plenty of separation on the slant route.  While his hip mobility allows him to stay in phase more often than not, at the NFL level, Graham Jr. will need to learn to play with far more patience, and stay square to challenge more talented receivers in press coverage reps.

Overall, Thomas Graham Jr. enters the NFL with a skillset that will allow him to contribute as a boundary cornerback immediately.  Although he is a potential fit in most schemes, I tend to believe that Graham Jr. would best fit with a team which relies heavily on man coverage centric schemes, yet also occasionally deploys traditional, Cover 2 sets, with the cornerback serving as a flat defender.

Although slightly smaller in stature, I see a lot of similarities between Graham Jr. and current Steelers cornerback Steven Nelson, with both being smaller statured players who are at their best in press man coverage, but show versatility in their games, and tackle well in space when able to avoid oncoming blockers.  While his 40 time will certainly influence his draft stock, Graham Jr. has received some buzz from his early work in drills at the Senior Bowl, and could certainly be a day two prospect if a team is looking for an NFL ready, man coverage cornerback.  In Pittsburgh, Graham Jr. would likely compete for a sub package role early, where he could potentially bump outside, with either Steven Nelson or Cam Sutton shifting into the Nickel role.

Nonetheless, I don’t see Graham Jr. as a player who would provide much assistance on special teams units, potentially limiting his value as a mid round prospect in Pittsburgh, who often seeks to get special teams contributions from their rookies.  Thus, while his lack of slot experience makes his path to immediate contributions a difficult projection, Graham Jr. is a high floor, NFL ready prospect, who could certainly factor into the teams plans of replacing Joe Haden as a long-term starter after the 2021 season.