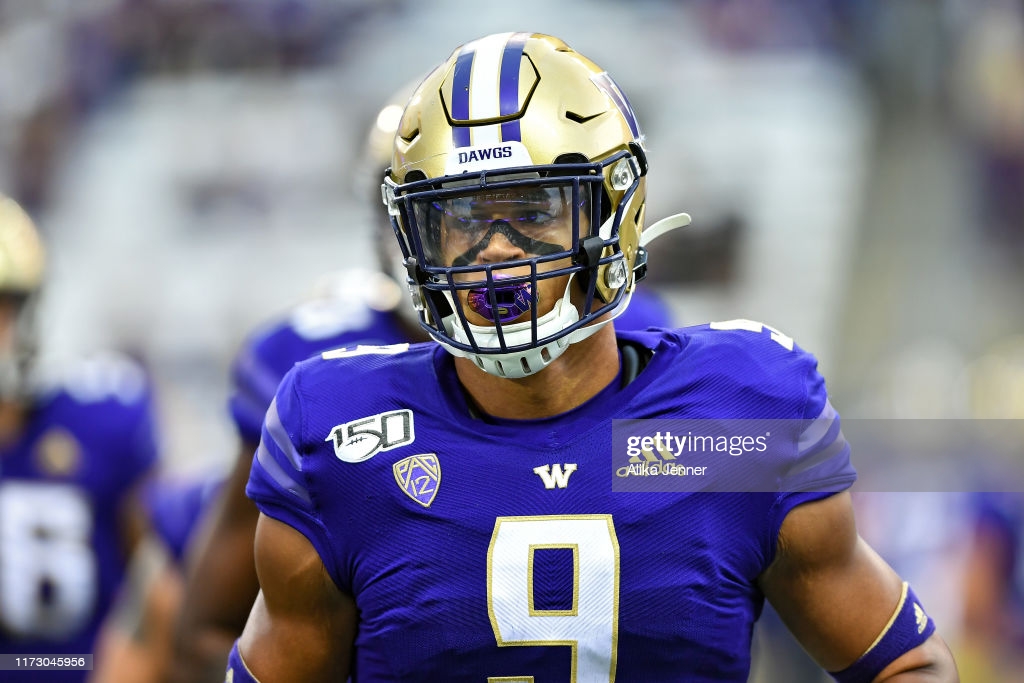 Tryon opted out of the 2020 season after a promising sophomore season when he finished fifth in the PAC-12 in sacks (8). It will be interesting to see what if any affect it has on the players and their draft stock for those who did not play this year.

As a pass rusher, he played mostly on the strong side of the defense lining up on both sides of the line.  He has good burst at the snap and can get up field quickly on the edge and very good motor to get after the quarterback. He uses his hands well using swipes and chops and will use multiple chops on the same pass rush to keep the blockers hands down. He shows good lateral agility to press outside and counter to the B gap. He varied his pass rush using a stab, rip, club and showed good hand strength to use a push/pull and yank blockers down and out of his way. He displayed solid quickness to come off the hip of the defensive tackle on stunts to the inside and did his part as the penetrator for teammates. They also used him to line up as the middle linebacker in radar or amoeba defenses.

Vs Utah, he’s coming from the right side of the screen. He’ll counter to the inside swimming over the blocker for the sack.

Vs Utah, this was his best rep around the edge just beating the right tackle with speed.

At Washington State, he’s going to cut inside on a stunt and shows off his closing speed.

He has a good amount of coverage opportunities in both Zone and Man.  He looked very comfortable in his drops and showed clean movements reading the quarterback in Zone.  He would also line up over the slot or handle the running back in Man coverage and handle it well showing good effort and athleticism to stick with his assignment.

Vs Oregon, from the right edge he’ll drop into coverage and he looks loose and moves comfortable with good awareness of his area and closes on the ball quickly.

Once he gets the edge has adequate bend and ankle flexion limiting his ability to flatten to the quarterback. He didn’t bull rush often he didn’t show the play strength to consistently drive the blocker back in the pocket.

Against the run, he has the strength and length to set on the edge and has shown the ability to yank the blocker so he can pursue the ball. Able to make tackles from the backside behind the offensive line.  He shows solid strength and good effort to hold his ground and fight through versus double teams. He was a good tackler on plays inside the tackle box.

At Stanford from the left side he will engage the tackle, yank down to shed the blocker and crash inside to make the tackle.

Vs Oregon, he is lined up inside the right tackle down in the red zone. He uses good leverage to hold his ground and shove the blocker to the inside and make the stop.

Too often he was handled by tight ends against the run.  He needs to improve his consistency to shed blocks against any blocker. He gives up the edge trying to cut into the inside gaps allowing the runner to get outside. He is marginal reading the mesh point often running by the ball or hesitating too long trying to figure out who has it. He doesn’t chase the ball as much as you would like when the play goes away from him. There were plays were he had chances to get in on the tackle and passed them up.

Vs California, this was early in 2019 and I honestly don’t know what he is doing. He is on the left edge and will have a free run into the backfield with the play right in front of him and just runs past all of it. This was easily the worst read he made versus the run.

Overall, Tryon has very good athleticism, size and good motor to get after the quarterback.  He gets off the line quickly; uses his hands well, has a fairly diverse pass rush plan and good closing speed once he gets in the backfield.  Against the run he has strength to set the edge and quickness to make plays from the backside.

I question whether he has enough bend around the edge and will need to improve on his bull rush.  He also needs to stop the urge to cut inside against the run and could show more effort pursuing to the ball outside of the backfield.

Despite the year off he shows enough qualities to get him off the board fairly early and would fit very nicely as an outside linebacker in an odd man front in the NFL.

Games Watched:  2019 – Vs California, At Stanford, Vs Oregon, Vs Utah, At Washington State