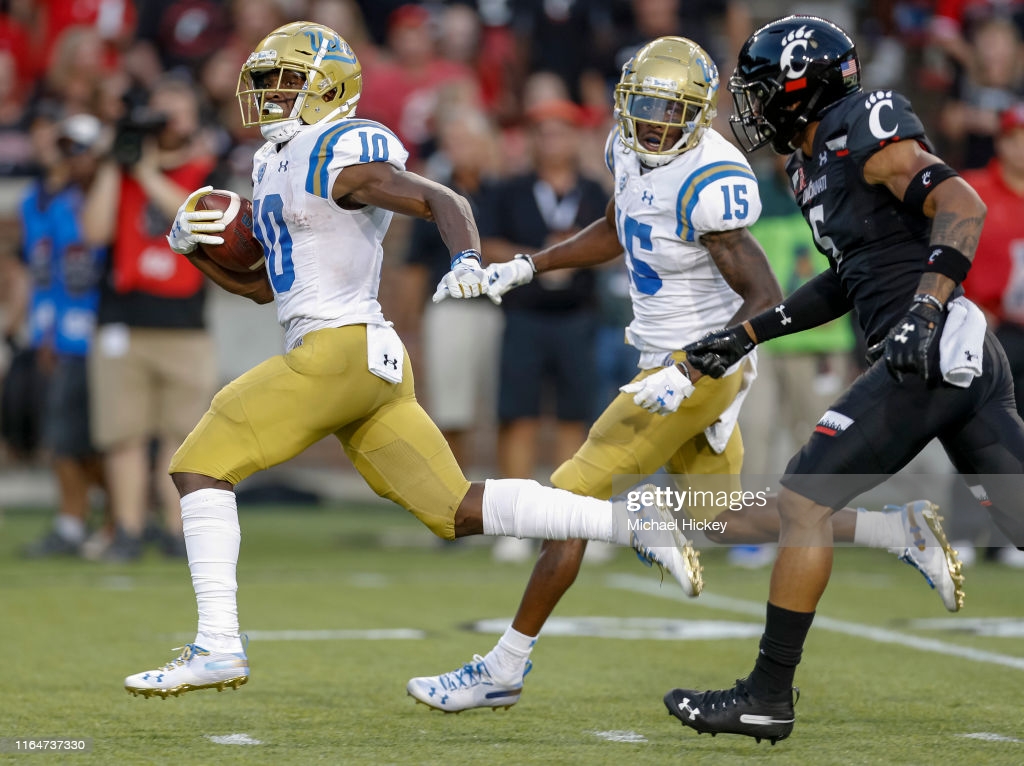 -Elusive running back that sets up defenders well
-Explodes in and out of cuts without losing any speed
-Nuanced route runner out of the backfield
-Great hands overall for the position; former slot receiver
-Good overall vision and sets blockers up for success
-Agility is through the roof in tight spaces

-Still developing as a running back overall
-A bit small overall, better suited to move back out to the slot
-Lacks overall contact balance and goes down too easily
-Does not have high-end speed to run away from defenders consistently
-Discipline as a runner is below average, tries to hit the home run on every touch

-Redshirt senior who switched from slot receiver to running back after 2018 season
-Played in 42 career games at UCLA
-Finished career with 234 carries for 1,101 yards and seven touchdowns; added 99 catches for 958 yard and eight touchdowns
-Added 26 kick returns for 611 yards and a score
-Led the Pac-12 Conference and ranked sixth in the nation in all-purpose yards per game (165.83) in 2020
-Named First or Second Team All-Conference selection at running back and/or all-purpose player in the PAC-12
-Named First Team All-Purpose player by the Associated Press

As the NFL game continues to shift more and more in the direction of the collegiate game – at least offensively – guys that can do everything out of the backfield as a weapon become more and more valuable in todays game.

Fortunately for UCLA running back Demetric Felton, he enters the NFL at just the right time.

A former slot receiver for the Bruins prior to Chip Kelly taking over the program, Felton made the shift into the backfield and flourished in Kelly’s up-tempo attack, giving the Bruins an explosive weapon that became a chess piece for Kelly to work with.

Despite playing the last two years at running back, Felton is still significantly limited for the position in terms of experience and development. What he puts on tape though is impressive.

While I am not fond of Felton’s tendency to try and bounce everything outside and hit the home run, he really knows how to set up defenders quickly in space and can hit them with impressive explosion into and out of his cuts, leaving guys grasping for air.

Here against California in 2020, Felton does a good job bouncing this outside to open field. I like that he gets upfield quickly once he turns the corner, rather than stretch it out, and look at the transition into that cut, leaving the California defense back grabbing nothing but air.

Felton is just so good at getting into and out of moves with ease, rarely losing any speed. His body control is really impressive, as evidenced here by a quick spin move in the backfield against the Oregon Ducks in 2020, forcing a missed tackle one-on-one before then picking up the first down.

His stop/start ability is pretty impressive too. It’s hard to physical gear down, spin and burst forward without any wasted movement, but Felton makes it look easy.

One thing that stands out to me with Felton is his ease with which he executes jump cuts at such a high level. He stays in control with his weight distribution and overall balance and makes them look so easy.

What I want to see in a running back when he’s executing cuts – specifically jump cuts – is that I want to see them continue to move forward. Felton does that here and keeps his pads square to the line of scrimmage.

Felton’s overall vision is good. He’s most comfortable running zone concepts, which is what he’ll have to land in at the next level to get the most out of him. His vision allows him to pick his way through defenses in zone concepts, which he does here against California.

Give him space and he’s dangerous with the football.

He doesn’t have much power and his contact balance is below average overall with his frame, but he has flashes of it.

Against Southern California in 2020, Felton does a great job showing patience to pick through the hole, decent power to keep the defender at bay, and the overall speed to run away from USC defenders on the explosive play.

Overall, Felton is a real weapon as a pass catcher and can really serve as a complimentary change-of-pace running back, but he’s on the smaller side for the position and really doesn’t have the overall experience to step into a heavy workload in the NFL.

Felton is best suited for a zone blocking scheme with some West Coast concepts. A creative play caller – like he had with Chip Kelly at UCLA – will do wonders for him. He’s definitely a chess piece, but not one you build an offense around.