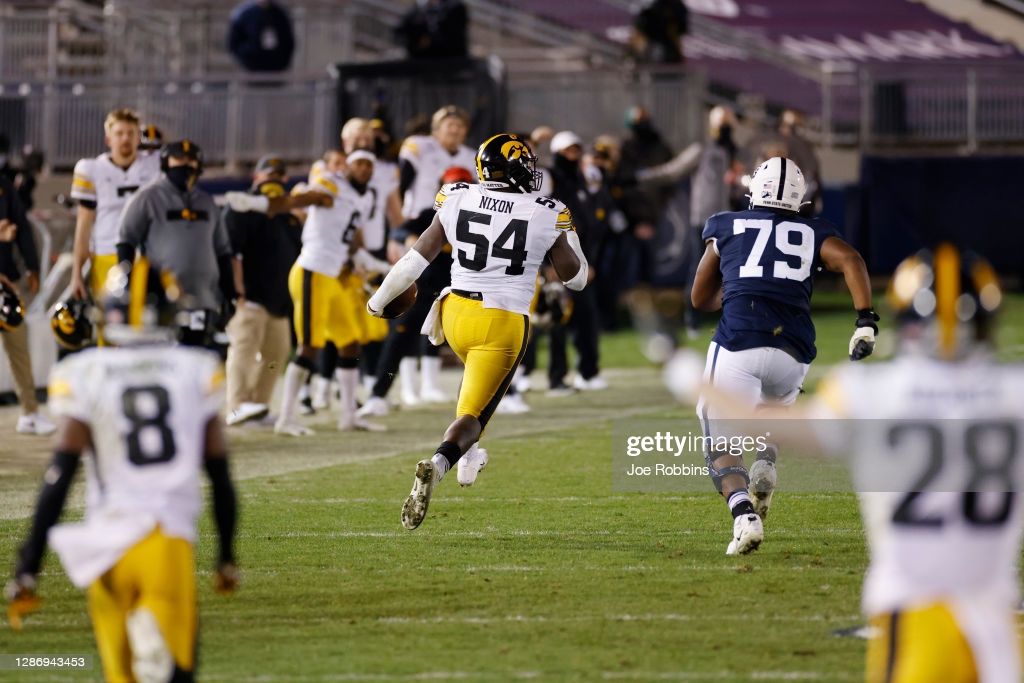 After a breakout season Daviyon Nixon entered the draft after his redshirt junior season.  He earned All-American and All-Big Ten honors.  He spent the majority of his time at the 1/3 tech in Iowa’s even front.

As a pass rusher he has solid quickness and burst at the snap and has solid hand usage to use chops and swipes against the blocker.  He has good quickness to get into gap and will use a rip, club and an occasional hump move.  He has good play strength, pad level and hand placement to use power rushes to drive the offensive lineman into the pocket.  He has good balance and plays under control aiding his good change of direction.  He has a good motor to get after the QB or to chase plays across and downfield.  He was used often on contain rushes to use his agility to keep the QB from escaping the pocket. He is effective as a penetrator on stunts to clear paths for teammates. He has good awareness to get into passing lanes and get his hands up.

Vs Purdue he will use hand placement, pad level and leg drive to push the left guard back to the quarterback.

Vs Northwestern, he is lined up over the right guard and will use a jab to the inside and then rip in between the guard and tackle and shows his motor to push through to get the sack.

Vs Penn State he will loop to the outside and reads the quarterbacks eyes to get in the passing lane and make the interception and takes it 71 yards for a touchdown.

Against the run, he has good mental processing to read blocks and shows good quickness to get in to gaps when playing 1 gap to disrupt in the backfield. He has good lateral agility and strength to handle outside Zone blocks and put him in a good position.  When playing from the backside he has good balance to contain the backside cut lanes. In a one on one block he has good hand and play strength to stack and shed when playing in a 2 gap scheme. He is good versus double teams using good technique to split the blockers. He has good play strength to absorb wham blocks from tight ends and good awareness on cut blocks. He is a strong tackler limiting yards after contact.

Vs Purdue, he will track the play from the backside, stays under control to not overrun the play and makes the stop.

Vs Northwestern, he is unblocked and recognizes the wham block coming from this right. He flings the blocker aside and wraps up the runner.

Vs Northwestern from the right side he will read the block, knife inside of the left guard into the backfield and dive to trip up the runner for a loss.

Vs Michigan State from the 1 tech position he will recognize the double team block, drop to his left knee and turn to split the blockers and cuts off the lane inside.

His snap timing is inconsistent and this causes him to be late with his hands and leaves his chest open.  His hands are not always active on every pass play and he will cut off his rush to just try to get his hands up. His pass rush plan was limited and didn’t use power rushes as much as I expected based on how successful he was. His timing to shed blocks could be quickened up.

Overall, Nixon is a strong run defender capable of shooting gaps while playing with good balance and play strength. He’s a strong tackler and has a good motor to chase down plays around the field. He has a developing pass rush plan and has the strength to bull rush blockers into the pocket. He has room to improve his pass rush overall as well as his consistency at the snap and with his hands when pass rushing.

He is a high ceiling player and will fit best as a 1/3T defensive tackle in a 1 gap defense and will eventually be a three down player.