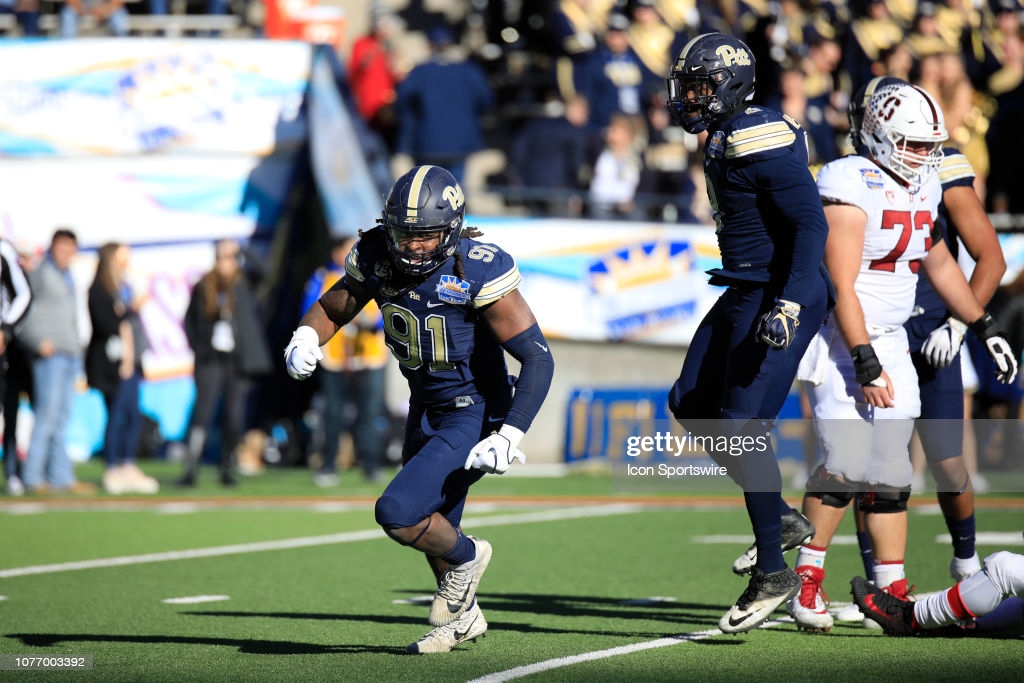 The first tape I looked at was Pitt vs Clemson. On this play Jones II is aligned as the right defensive end where he aligned most frequently. This play shows off Jones II‘s hustle. Initially he is involved in an ET stunt, where he is responsible for picking off the Guard, allowing the DT to come free. Jones II sees Lawrence break contain and defeats a couple of blockers whilst chasing him down. This pressure results in an incompletion. At times it looks as if he doesn’t have a plan when he’s rushing the passer, however his great reactions and athletic ability allow him to make plays like this.

Here’s an example of Jones II rushing the passer against Clemson. Jones II appears to try and use the Von Miller ‘Ghost Move’. A move that Steelers OLB Alex Highsmith had some success with this past year. Once this is unsuccessful he does not have a second move and stops his feet. I have noticed this quite frequently and it will need to improve as he enters the NFL. There are some clips of Jones II at the Senior Bowl in 1v1s struggling with this problem. Jones II is a speed rusher with a lot of athleticism but he’s not the finished product. Jones II is not as polished as Highsmith was coming out of college.

On this 3rd and 6 in the 2nd Quarter Jones II shows his upside. Pitt is running a blitz and Jones II is initially aligned outside the LT. On the snap he utilises a great inside move to pass the Tackle and clear the Guard before sacking Trevor Lawrence.  These are the plays  that have drawn the attention of NFL scouts and coaches.

This play is taken from Pitt’s game at Miami. Jones II is again aligned as the right defensive end over the LT. The Hurricanes align in a tight formation and try to run a HB screen towards Jones II. The TE and WR on that side are responsible for blocking second and third level defenders with the Offensive Line cutting the first level. The Left Tackle attempts to cut Jones II, but he does a nice job defeating the block. Jones II shows off his athleticism avoiding the cut, and the LT then holds Jones II by grabbing his ankles which draws the flag. Jones II won’t be credited on the stat sheet here but he created this negative play for the Panthers.

On this play Jones II is aligned in his signature four point rush stance. Jones II aligns in a low and compact stance which allows him to explode up the field. The most important aspect of pass rushing is getting off the ball. This is something TJ Watt has improved each year since he entered the league. A great get off enables pass rushers to beat blockers to ‘their spot’. For an Offensive Tackle this is normally 3 yards deep and a yard and a half outside of where they align. Coaches will place a cone here and teach defenders to beat the blocker to this point. This is exactly what Jones II does on this play. He accelerates up the field and beats the LT to the corner. Jones II narrowly misses out on the sack, he loses control at the top of his rush and the QB manages to escape. This snap is a great summary of Jones II as a prospect; he has fantastic athletic potential but needs some refining.

This next clip is taken from the 1v1 pass rush section during practice at the Senior Bowl. Jones II generally struggled in this period, where he aligned as both an end and also an interior rusher. Jones II is aligned against internet sensation Quinn Meinerz the Div 3 Guard from Wisconsin Whitewater. It appears that Jones II is attempting a cross chop move similar to one used by Baltimore Defensive End Yannick Ngakoue. Jones II doesn’t clear Meinerz’s hip and as he looks to work back inside he gets pancaked by Meinerz on this rep.

On this clip from the Senior Bowl, Jones II again uses an inside move to get a sack. Jones II had a really good game and definitely pushed himself up teams’ draft boards. Jones II initially does a good job of getting upfield. He then plants off his outside leg and uses his left arm to pin the inside arm of the LT. He then flips his hips before using a swim move to clear the tackle and get into the backfield. Jones II finishes the play, violently throwing down Wake Forest Quarterback Jamie Newman.

Jones II is a speed rusher with great athleticism and potential. Jones II struggles with power and is not a great run defender but he will put on some weight at the next level. The NFL is a passing league and rushing the passer is critical to a team’s success. The Steelers have a long history of success at the Outside Linebacker position, which is a spot I think Jones II could convert to. The Steelers play a large amount of Nickel defense and the OLBs are asked to play in a similar role to four front Defensive Ends. This should help ease Jones II transition As Jones II develops he will become more of a 3 down defender but his initial contributions would come on obvious passing downs.