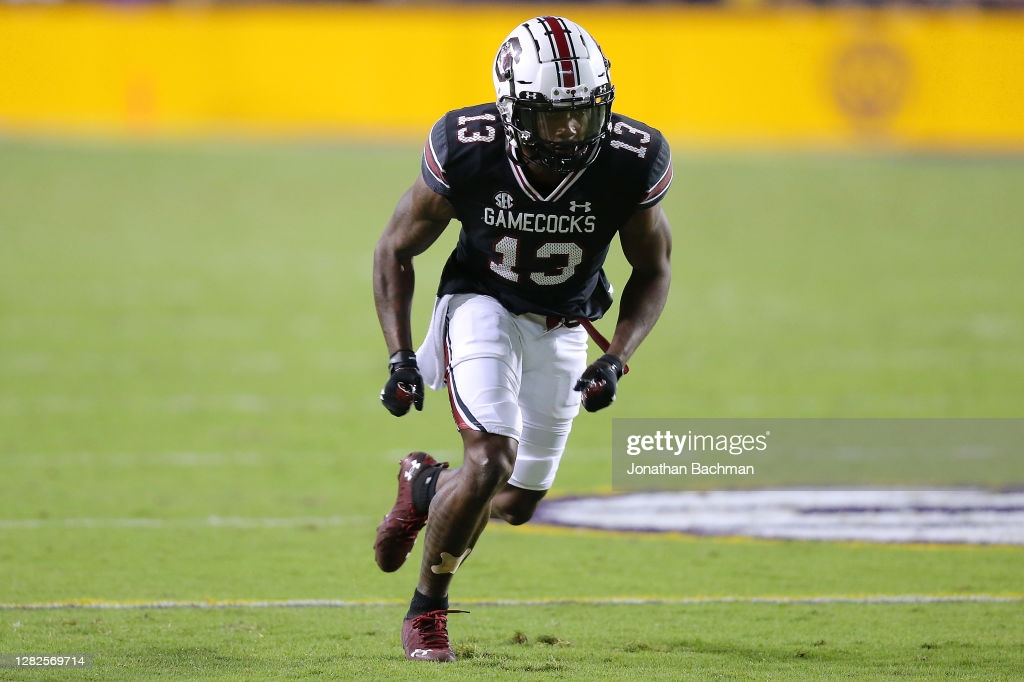 In a down year for the Gamecocks and with subpar quarterback play Shi Smith managed to put up good numbers. He led the team in receptions and nearly doubled the amount of the player who finished second. He capped off his year with 3 receptions for 57 yards in the Senior Bowl.

Against off coverage he has very good acceleration and he has the quickness to defeat Press coverage.  He was solid dropping his hips at the top of his route on comeback routes and show good speed through his break point. He uses his hands well at the top of routes to create space and was solid creating separation with speed or by manipulating the defender. He was used on all three levels with success on screens, dig, out and slants.  He has the speed to overtake DB’s on deep routes to take the top off of the defense. He did well and had a lot of receptions vs Zone with a solid awareness to sit down in open areas.

At Florida here is a nice route from the slot. He’ll angle inside and get the DB to turn his hips. He’ll then start his break outside and swipe the DB’s hand off him to create space for a catch near the sideline.

He showed soft hands when stationary and on the move and has a solid ability to adjust to the ball around his frame.  He is fearless with a willingness to go over the middle and took several big hits and popped right up. When he got the ball in space he was able to show very good acceleration up field with impressive straight line speed and will use a spin move in tight spaces to attempt to avoid tacklers. He shows good awareness to become the defender on poorly thrown balls and had three pass breakups in the games watched.

Vs Tennessee, from the slot he avoids the jam at the top of the stem to head inside on his route. He makes a clean catch and accelerates to the end zone.

Vs Auburn, he is split wide right and the get a free play when the defense jumps.  He runs to the corner and the DB jumps to soon but Smith times it right to highpoint the ball.

Vs Auburn he will run a fade on third down and shows good concentration to bring in this tough catch.

He was used on jet sweeps and the results were not good but neither was the blocking.  He has the speed to be successful in this area. He was also used as a kick returner with solid results and he projects as an ideal candidate to be a gunner on the punt team.

Vs Tennessee he is lined up on the wing and will take a fly pass to the left and you can see his burst once he turns the corner.

Physical defensive backs are going to able to move and redirect him at the line of scrimmage and within his routes.  He had several interactions with physical DBs who seemed to get in his head which led to confrontations and had to have teammates pull him away.  His ability to create space was inconsistent against Man coverage. He was poor on contested catches and 50/50 balls and had a couple drops in the games watched.  He has adequate lateral agility and marginal play strength to make defenders miss and break tackles. He had adequate effort as a blocker and took his time getting in position and set up with his hands at his side leaving his chest open.  They also used him on arc blocks on the edge for the running back but lacks the play strength and technique to be effective.

At Florida, he is in slot against a physical DB who gets his hands into the chest of Smith on the out breaking route and gives him and extra push which leads Smith to taking a swing at the defender.

At Florida he’ll run a fade from the slot. He pushes off to create space and gets both hands on the ball but drops it.

Overall, Smith has the speed to take the top off the defense and the acceleration to make good things happen in space.  His hands were good when uncontested and he showed different ways to create space. Physical defensive back will be a chore for him, he must work on improving in contested catch situations, fine tune his route running and not let his emotions get the best of him.

I think he has potential as a Z or slot and would be best on the intermediate and deep levels. He also should be a strong special teamer as the gunner and possible as a kick returner.