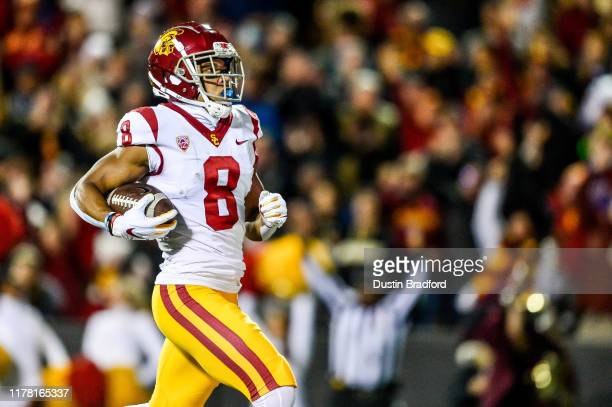 The Pittsburgh Steelers could be needing to fill a hole at slot receiver if JuJu Smith-Schuster leaves the team in free agency this offseason (see my introduction on Kadarius Toney for more details).  Like current free agent JuJu Smith-Schuster, Amon-Ra St. Brown is a product of USC.  This is not where the comparisons stop.  Both receivers share a variety of traits that the Pittsburgh Steelers look for when evaluating receivers.  Even more important is the fact that the Steelers might not have to spend top-tier draft capital on St. Brown in order to make him a part of their 2021 roster.  Unlike receivers such as DeVonta Smith, Ja’Marr Chase, Jaylen Waddle, and a few more who will likely be drafted in the first round, Amon-Ra St. Brown might be available in the early portion of day two due to a receiver class that will likely push him down the pecking order.  If he were to fall a bit, a player of St. Brown’s stature would provide excellent value in that draft range.

In this clip from USC’s 2020 matchup with Washington State, Amon-Ra St. Brown runs a slot fade and comes away with an excellent catch in the back of the end zone.  The defender begins in off coverage and St. Brown immediately streaks vertically as the ball is snapped.  He tries to make it appear as though he wants to break inside, but the defender does a good job staying with him and opening his hips as St. Brown commits to the outside.  There is some hand fighting, but St. Brown is able to get his head around to track the flight path of the ball while it is in the air.  He times his jump and attacks the ball with strong hands while the defender is draped all over him.  St. Brown provides these contested catches despite the fact that he isn’t the biggest receiver.

This clip from the same game against Washington State depicts how St. Brown can do damage with manufactured touches.  The Steelers have been implementing more motion and misdirection plays in their offensive schemes, and this will only increase with Matt Canada being named the team’s new offensive coordinator.  All of the Steelers’ current receivers have the ability to be used in a versatile fashion, and this creates uncertainty for the defense.  Amon-Ra St. Brown is another guy that would mesh well with this philosophy, as he is a receiver who is often targeted or given manufactured touches in short yardage and key situations due to his toughness and ability to pick up yards regardless of what the defense throws his way.

This clip from USC’s 2020 game vs. ASU encapsulates Amon-Ra St. Brown’s competitive nature.  St. Brown is lined up on the left side of the field.  Immediately after the snap, he darts forward as if shot out of a cannon and attacks the corner, driving him backwards.  It may not seem like much, but this showing of grit, and the want to do some dirty work throughout his college career has surely put St. Brown on the Pittsburgh Steelers’ radar.

Fellow USC Trojan JuJu Smith-Schuster also displayed a similar mentality during his time at USC, and it translated well into the NFL.  Just this past season Smith-Schuster was Big Ben’s main go-to-target in clutch situations due to his sheer will to pick up first downs and touchdowns even with defenders all over him.

This is something the Steelers look for when evaluating receivers, and the value of these mental traits can’t be understated.  General manager Kevin Colbert knows what he’s looking for when thinking about who “is” a Pittsburgh Steeler.  It’s an identity that seems to make certain players jump out at you when watching film.

In this clip from USC’s game against UCLA in 2020, Amon-Ra St. Brown is lined up on the left side of the field.  As the ball is snapped, St. Brown hops forward to get on the toes of the defensive back, who tries to counter with a left-handed jam to the shoulder of St. Brown.  St. Brown anticipates the jam and is able to slightly lean backwards to absorb it before cutting inside on the slant route.  He finishes the catch with strong hands.

This clip is from USC’s game against Notre Dame in 2019.  Amon-Ra St. Brown is lined up in the slot and bursts off the line at the snap in order to get in the face of the defender who is in off coverage.  As he quickly closes space and begins to run up on the defender’s toes, he stutter-steps and utilizes an inside head fake before fighting through the hands of the DB for an outside release.  After reaching the first down marker, he swivels his body to break outside without rounding his route.  The quarterback places the ball over top of the defender and St. Brown is able to track, then high point it.  After securing the catch, St. Brown drives his feet downwards in order to establish his position inbounds before his momentum carries him out.

This play is very similar to the last one.  In this clip from USC’s matchup with UCLA, you can see how Amon-Ra St. Brown is a “chain mover.”  Much like JuJu, St. Brown is a target that his USC quarterback (Kedon Slovis) would often look towards as his primary option on third down and short yardage situations.  St. Brown is again working against off coverage and explodes after the snap to close space before breaking outside.  The quarterback places the ball where only St. Brown will be able to snag it, and St. Brown is able to jump into the air, secure the catch, and finish with his feet inbounds while the defender is trying to wrestle him out.

This clip from his game against Notre Dame again depicts Amon-Ra St. Brown’s willingness to do the dirty work that won’t show up in highlights but will win a football game.  He is lined up in the slot on the boundary side of the field and is throwing a block on the play side of the outside run.  He quickly engages with his block, utilizing leverage and good hand placement.  Even as the running back is far past his location, he is still engaged with the block and shows some emotion at the end of the play, clearly displaying that he takes pride in his work.

This final clip that I want to show from Amon-Ra St. Brown’s game against Notre Dame is a play where he ran a great route but was unable to ultimately come away with the grab.  St. Brown’s defender is in off coverage, so St. Brown shoots forward at the snap then jabs to the outside accompanied by a head fake while at full speed after closing space.  This forces the defender to open his hips towards the outside.  Now with space to work with, St. Brown snaps his head around to locate the ball.  He has to slow down and get low to attempt to the catch the pass, but I think if he decided to utilize his hands as a basket rather than trying to catch without extra support beneath the ball (he had his thumbs down and fingers up) he might have been able to reel it in.  It still would have been a tough catch due to the low throw from his quarterback, but the route was great.

This clip is another play from USC’s game against UCLA.  It depicts a drop from St. Brown that resulted in an interception.  While St. Brown is a hands catcher, there were times where I saw the occasional concentration drop.  On this play, the ball hits St. Brown in the hands then flies over his head for a UCLA interception.  I don’t know if St. Brown saw the closing defenders and took his eye off the ball, or if he was trying to formulate his plan for after-the-catch yards, but he tips the ball up after being unable to secure it which results in a turnover from his offense.  To be fair, the pass from quarterback Kedon Slovis was a bit wobbly, but you would still like to see St. Brown ultimately make the grab.  As Steelers fans saw in 2020, these types of drops can be extremely costly.

Amon-Ra St. Brown is a great wide receiver prospect, but with such a top-heavy group garnering all the talk this year, it’s easy to forget some of the guys that are going to be drafted a bit later.  However, these early to mid-round prospects can certainly provide a massive amount of value to the team that drafts them in 2021.  This is the case for Amon-Ra St. Brown.  He is a polished player that brings a competitive edge to all the games he steps foot in.  Like every prospect, St. Brown can work to further develop areas of his game, but from day one, his top-dog (competitive, not cocky – he was regarded as a leader during his time at USC), blue-collar attitude and playmaking ability will be apparent.  The USC product might end up going earlier than the Steelers would want if they are to contemplate selecting him in the draft, but due to his intangibles and the way he conducts his business on the field, I am sure the Steelers will do their due diligence.