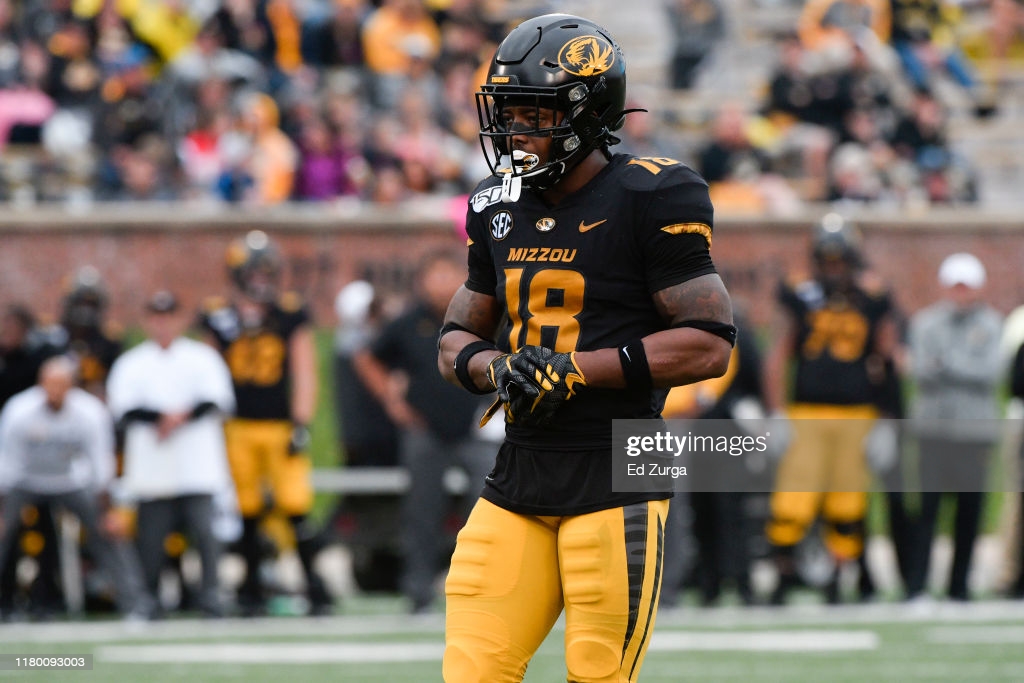 Bledsoe played safety for Missouri and was used in a variety of ways.  He lined up deep, on the end of the line of scrimmage and in the slot to name a few. He has solid height and weight with adequate arm length and very good hand size.

Against the pass, he is a good pre snap communicator constantly trying to make sure the defense is on the same page. Let’s start with him aligned over the tight end in choke coverage.  He shows quick hands and a good punch at the line of scrimmage and plays with good physicality.  He handles inline tight ends well in coverage capable of staying in their back pocket through the route tree.

The majority of work came in the slot from and off Man coverage position. He has a solid backpedal and uses his hands well to redirect receivers. He has loose hips and can accelerate quickly to follow crossers or stick with deep routes. He is very good at getting his head around on deep routes and plays the ball well.

In Zone coverage in the curl/flat areas he shows good awareness and attempts to redirect anyone coming through his area. He has solid change of direction and can get downhill quickly on plays in front of him to make tackles or attack blockers on screens. He was used deep in Cover 1, 2 and 3 and shows solid range from Cover 2 and 3. He wasn’t used to blitz often but showed good acceleration and I think he could be used in that way in the NFL.

Vs Alabama, Bledsoe (1) is in the slot to the top and will show good speed to get to the WR and break up the pass in the end zone.

Vs LSU, with the game on the line he plays this quick out perfectly to break up the pass preserve the win.

Vs Mississippi State, he’s in the slot to the top and after opening to the outside, flips his hips and accelerates with the shallow cross.  He uses his right hand to pull down the arm of the receiver and the left to reach around and make sure the ball gets knocked out.

Vs Mississippi State, he will face a fade from the slot.  He will jam the receiver at the break point; shows speed to run in phase, gets his head around and will use his right hand to get between the WR’s hands a rip the ball out.

Vs Mississippi State again from the slot he will play to the outside of the receiver with help inside.  He reads the corner route, uses his hand to locate the receiver while getting his head around and comes down with the interception.

Against the run, he was often lined up on the end of the line and showed the willingness and ability to force plays inside. When plays did get outside he showed enough speed to chase down most runners to the sideline. He has solid mental processing on running plays and is solid working through traffic to get to the ball. He wasn’t a huge part of the run defense but he did make plays especially on the outside.

At Florida, he’s on the left side of the screen and while he doesn’t make the tackle he takes on lead blocker to fill the gap in the red zone.

His is a little high in his back pedal and quicker, shiftier receivers can give him some trouble at the break point and on crossing routes. He was beaten a couple times on plays were he was following a receiver in motion at the snap when unable to get a jam on them early in the route. He isn’t suited to play the single high safety on a consistent basis. He did not play a lot in Press coverage in the slot and has the physicality so it would depend on if he has the feet to play that way.  His physicality versus the run is adequate. He is usually around the pile but not necessarily in it and his tackling technique can use some improvement. He got caught with eyes in the backfield a couple times losing sight of his assignment in the passing game.

Overall, Bledsoe is a guy that offers a defense the flexibility to use him in different ways.  He can be used on the deep end on Cover 2 and Cover 3 assignments can play as the nickel back. Depending on how the offseason goes the Steelers could use depth in both areas.  He can handle TE’s and big slot WR’s on all levels and can make plays in the run game.  I wouldn’t play him consistently in the single high or in off coverage against quicker slot receivers.  He could replace a guy like Mike Hilton if he signs elsewhere.

Games Watched:  2020 – Vs Alabama, Vs LSU, At Florida, Vs Georgia, At Mississippi State