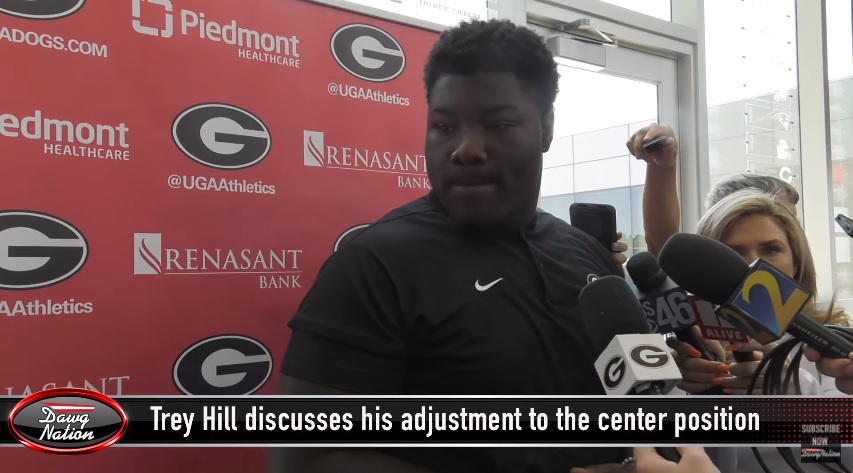 – Rare size/bulk for the position
– Strength plays to his size, strong upper body and pushes his weight around, able to bury linebackers and holds POA against defensive linemen
– Runs feet through contact, plays through whistle
– Creates movement on first level down blocks
– Power on punch and shows violent hands
– Shows good burst and snap out of stance, more explosive than you might expect, capable of pulling and getting to spot
– Plays with sound base in pass pro with no major flaws
– Size/strength allows him able to absorb bull rushes in pass pro
– Shows proper hand placement and has an impactful punch
– Some versatility, experience playing guard and center
– Played against quality competition

– Has some level of athleticism but inconsistent at second level, has trouble hitting moving target and redirecting self in space
– Tendency to show flatback on contact in run game, strength allows him to still win but want to see better leverage and ability to roll rips on contact better as run blocker
– Can wane a bit in pass pro on extended plays
– Marginal in space on screen plays, foot speed predictably isn’t very good
– Some recent medical concerns that will need to be evaluated

– 26 game starter for the Bulldogs, left school as a true junior
– Spent final four games of 2018 starting at right guard before moving to center for 2019, started 22 games there
– Missed final three games of 2020 after undergoing surgery on both knees (meniscus tear in one knee), surgeries were not considered major
– Played guard in high school, four-star recruit
– Part of track and field team (shot put) in addition to playing football in HS

You don’t find too many 6’4, 330 pound linemen in the NFL draft. And very few of those guys can play center. Hill is a unique profile, moving to the pivot his sophomore season and becoming a potential mauler in the middle. With rare size for the position, he overwhelms and engulfs interior linemen with size, strength, and power. Not uncommon to see Hill laying on top of a guy by the time the whistle is blown. Some examples.

But he isn’t a non-athlete either. There’s some burst and snap to his game. One of the best reps I saw of Hill came against Auburn in 2020. Watch him snap, pull, and log block the Tigers’ defender. Great play, really shows his ceiling.

And I don’t see a lot of obvious weaknesses in his game. His pass pro is sound with a strong punch, good hand placement, and base. He moves well enough laterally and his size makes him tough to get around. There were very few objectively negative reps I saw Hill have and I don’t spot any obvious, on-field flaws in his game.

But there are some things to be corrected. Want him to do a better job unlocking and rolling his hips through contact in the run game. He’ll drop his eye level on contact and develop flat back. Hill’s excellent strength allowed him to get away with it but he’ll need to improve this for the NFL level. It’ll also help him create movement up front as opposed to just holding the point of attack.

He’s the left of the two Bulldogs’ circled below.

And he doesn’t always have the foot speed to reach the second level. Another clip against Auburn because it’s the only All-22 I had and the best way to show examples of offensive linemen.

The medical is of concern too, you don’t love hearing about a 330 pound linemen needing surgeries on both knees, but the procedures didn’t seem major. So that softens the blow a bit.

Overall, Hill is the type of center the Steelers are looking for. If you want to have a more physical, dominating, get-a-yard line, Hill is a great step in solving that problem. He’s still young, a mauler, and you’re not going to find a talented, 330 pound, battle-tested center like him too often. Should be on Pittsburgh’s radar even if Maurkice Pouncey returns.