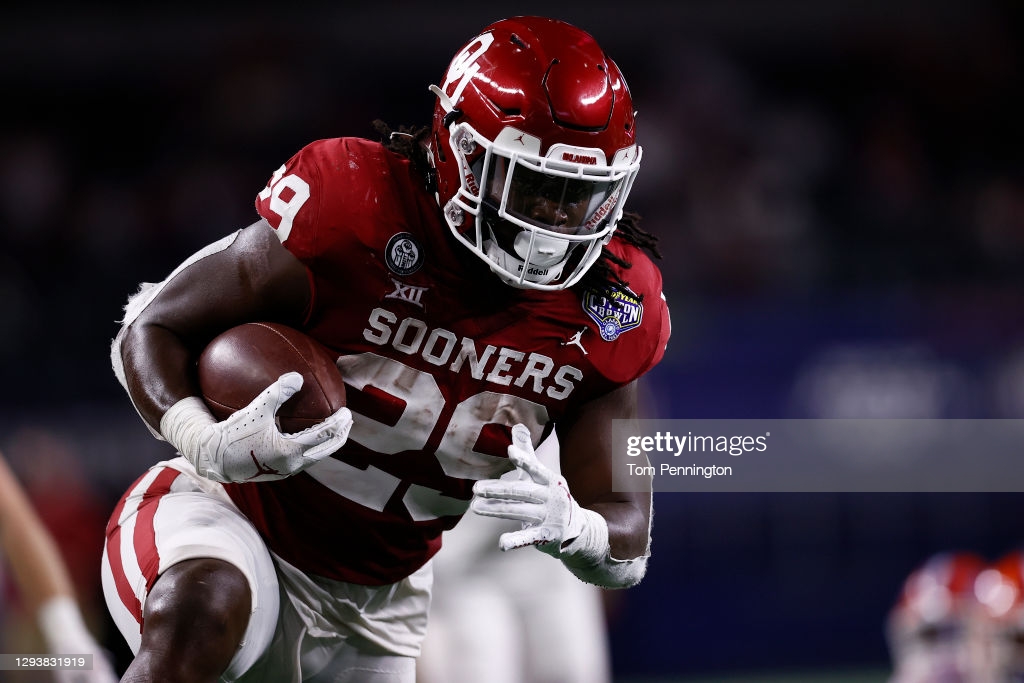 -Powerful downhill runner that consistently falls forward
-Nimble, fluid lower half to dance around defenders and wiggle out of tackles in tight spaces
-Obvious acceleration once he finds a lane
-Patient runner adept at reading blocker and picking his way to the second level
-Impressive strength in stiff arm that he throws well
-Disciplined runner committed to sticking to script early on

-Limited wear and tear, yet limited experience overall
-Does not possess good long speed, gets tracked down a lot
-Struggles to turn the corner on boundary runs
-Limited pass catching weapon with small route tree
-True spread RB that ran out of pistol and gun exclusively
-Rarely worked in pass protection; lunges into blocks with head and shoulder when asked, slipping off blocks

-Played in just 19 career games at Oklahoma
-Finished Sooner career with 165 carries for 1,180 yards and 13 touchdowns
-Added 28 receptions for 298 yards
-Suspended prior to CFB Semifinal loss to LSU for failed drug test, then missed half of 2020 season due to NCAA rules
-Competed in the 2021 Reese’s Senior Bowl
-Former top JUCO running back that chose the Sooners over Texas and USC in 2018
-Named Outstanding Offensive Player of the Goodyear Cotton Bowl Classic following win over Florida

Though he may have limited experience overall (just 19 career collegiate games), Oklahoma running back Rhamondre Stevenson certainly has the tape, and looks the part to be a regular on Sundays for a few years.

A former top JUCO running back that chose Oklahoma over USC and Texas, Stevenson looks like a true downhill, punishing running back that has a dash of short-area explosiveness to dance around defenders when he wants to.

Thriving in Oklahoma’s spread, zone-blocking system under Lincoln Riley, Stevenson profiles best as a back that runs exclusively in a zone system where he’s allowed to see the lanes right away.

When the lanes develop early and he doesn’t have to try and create on his own, he’s highly effective.

Here against Texas Tech in 2020, you can see the obvious acceleration up the field once Stevenson identifies the lane he will run through. Once he reaches the second level, he’s a runaway train that secondary defenders usually want no part of.

Stevenson packs a mean stiff arm, and he has a fluid, nimble lower half to change directions laterally quickly.

I really enjoy watching Stevenson’s feet work in space. He has dancers feet to go with tree trunks for legs. It’s a great combination for a running back.

His footwork helps set him up for great success on zone runs. He’s able to plant and go early here, and then has the nimbleness to dance around into space for the score.

I like his contact balance overall for a bigger running back. Usually, defenders try to chop down bigger backs at the knees, but those types of tackles don’t really affect Stevenson. He’s able to remain upright, run through arm tackles and is able to transfer a ton of power forward at the end of runs without sacrificing his ability to remain on his feet.

With Stevenson, his ability to remain upright and search for daylight with chaos happening around him is really impressive.

In 2019 against Kansas he’s able to create on his own, making the initial defender miss before then breaking a pair of tackles, bursting into daylight for one of the best runs of his career.

Then, in 2020 against Florida in the Cotton Bowl, he had one for the highlight reels, making seemingly the entire Florida front miss on his own in space for a late touchdown.

Overall, I think Stevenson has the makings of a bellcow back in a zone system where he can see the lanes develop right away. He has the acceleration, power and vision to really excel in the NFL in the right system.

He could be an option on passing downs because catches the football naturally, but he’s not a guy offensive minds are going to scheme up touches in the passing game for. He doesn’t have much experience as a route runner, and he’ll likely have to come off the field early in his career on third downs due to his lack of experience and ability as a pass protector.

He’s a name worth remembering in a deep class, one who could look like a flat-out steal early in his career with production right away.