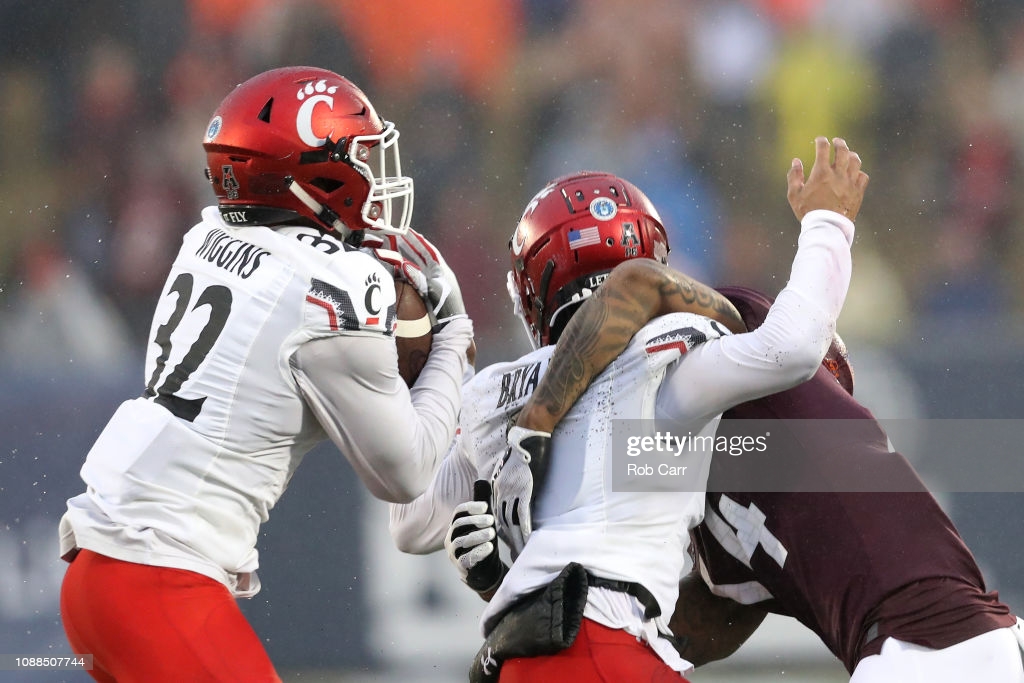 – Freakish athletic ability, named to Bruce Feldman’s Freak List
– Instinctual, plays downhill from his safety position with explosiveness
– Physicality and play strength gives him versatility as in and out of box defender
– Snaps as single high, box and boundary safety positions
– Shows great awareness in zone coverage, typically in position to make plays
– At best in leverage route situations, quick reaction to short and intermediate routes
– Plays with attitude, not afraid to fill running lanes and become an extra box defender
– Displays fluid hips, solid transitions in and out of breaks
– Good starting experience against quality competition
– Can use him in blitz packages, in the slot, as well as against tight ends

– Missed all of 2019 season with knee injury
– Struggles defending deep breaking routes in off man coverage
– At times struggles tackling in space on screens, takes poor angles
– Not a great fit as a single high safety, doesn’t have an ideal sideline to sideline range
– Has late reaction time in pass coverage at times
– Misses opportunities to drive on short yardage routes
– Inconsistent eye discipline leaves him susceptible to big plays
– Rarely used in press man situations, struggles defending speed from the slot

James Wiggins is one of the more interesting evaluations in the 2021 NFL Draft Class. Only a two year starter, he possesses freakish athletic ability, clocked in at 4.44 40 yard dash and a vertical jump of 35 inches before his knee injury that caused him to miss all of his redshirt sophomore season, according to Bruce Feldman’s freak list.

Wiggins is a physical specimen that showcases solid range as a safety for the Bearcats, provides a strong presence as an in the box defender and has ability to cover receivers and tight ends in the slot.

In this first clip against SMU this year, James Wiggins is lined up over a split out tight end, in off man coverage. Wiggins does a nice job clicking and closing on the short hitch route. His ability to close on short routes, whether it be outs, hitches or comebacks is impressive and gives him the versatility to work in several areas of a defense.

The thing about Cincinnati’s defense is they used Wiggins in a variety of situations this season, one being an extra blitzer in a blitz package. We get to see Wiggins explosiveness on full display, shot out of a cannon on the strip sack against Memphis this season. A heck of a play by Wiggins, showing he is close to the same player he was in 2018, when he was last healthy.

When Wiggins has leverage on out breaking routes, and is able to stay in the hip of a receiver, he can display his ball skills. Against this corner route against ECU this season, he reads the eyes of Pirates QB Holton Ahlers, uses his vertical jump ability and snags an interception. He has ballhawking ability in his repertoire.

Similar to the last play I displayed, Wiggins again quickly diagnoses the corner route, shows his explosiveness to change direction and plays through the hands of the receiver to cause the pass break up. Textbook play here by Wiggins defending the slot receiver.

However, as mentioned in the scouting notes, Wiggins had struggles this season with eye discipline and slow reaction time. He gets caught with his eyes in the backfield, flat footed and gets beat to the back pie-line for touchdown. Rarely do we see Wiggins let a receiver get behind him but he gets lulled to sleep by the play action fake.

One of his biggest strengths is his run support from his safety position. He fills holes with authority and is one of the harder hitting secondary players in this draft class. Here against Houston and UCF, he does a nice job stopping the run plays for minimal gains.

One of his best plays on tape was here working in the slot against Marlon Williams of UCF. He does a nice job clicking and closing on the RPO slant route and getting the pass break up. He’s at his best defending routes within the 10-20 yard range, with the ability to make plays on the ball.

Wiggins will have some questions to answer with his injury history, and his medicals could either help or hurt his draft stock.

His aggressive style of play will leave him susceptible to giving up big plays but he provides a unique skill set that could translate well to the next level as a versatile box safety, nickel corner hybrid. He has some upside as a single high safety but I feel comfortable saying he probably is best as a player 15 yards and in.

Nonetheless, he should be an immediate special teams contributor and could develop into a player who could eventually become a starter. He could fit well in a defensive back room that features all pro safety Minkah Fitzpatrick and pro bowler Joe Haden.

Games Watched: vs. Memphis, at UCF, vs ECU, at SMU