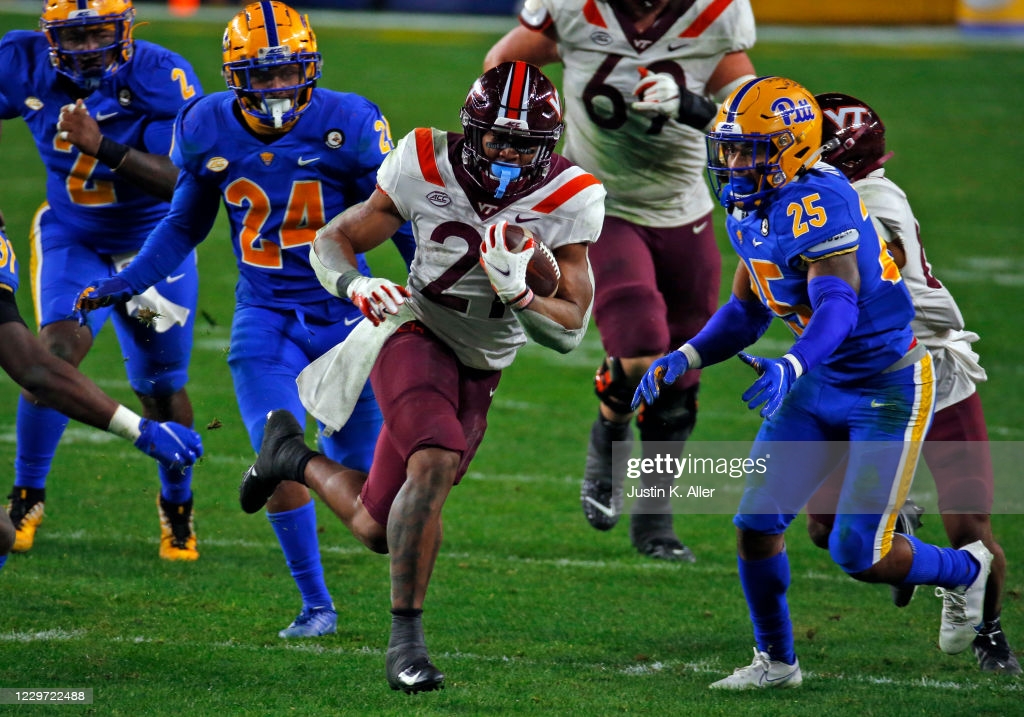 -Will not win a lot of foot races down the field to complete home run
-Limited usage as a pass catcher and route runner; never caught more than 10 passes in a year
-Willing pass blocker, but technique is a mess and overall strength is an issue
-Late bloomer overall and questions remain as to why he left Kansas mid-year in 2019
-Fifth-year senior, so on the older end of the spectrum in the draft class

While there are plenty of questions still unanswered as to why Khalil Herbert left the Kansas program in the middle of 2019 and later become a graduate transfer at Virginia Tech for 2020, the fact of the matter is the Hokies landed a top-flight athlete out of the situation and took advantage in 2020.

Herbert came in and became the first running back in 5 seasons to put up 1,000 rushing yards in a single season, and developed into a key weapon overall for Justin Fuente and the Hokies.

In a deep running backs class, Herbert will likely slip down the charts, but overall he has a lot to offer a team at a fungible position with a late round pick.

The first thing that jumps out with Herbert on tape is his impressive spatial awareness as a runner, and his ability to set up blockers with ease, allowing him to pick through defenses with relative ease.

He routinely makes good decisions with the football in his hands.

Here against West Virginia in 2018 as a member of the Kansas Jayhawks, Herbert does a terrific job setting up a block at the second level and has the spatial awareness once he’s in the clear to bounce the run to his right, running away from the Mountaineers’ defender.

His vision overall is strong for the position. He is very nimble in space and really picks his way through defenses with ease when he’s rolling downhill against secondary defenders.

Arm tackles will not bring him down either. I love the way he does not let the arm tackle late in this run slow him down at all.

Herbert’s ability to start and stop, and then accelerate in a hurry is something to see on tape.

He’s not a burner by any stretch of the imagination, but his ability to get up to top speed in a hurry is fascinating for a back his size.

When he’s at his best, Herbert excels in a one-cut, zone blocking system, where he can see holes develop, stick his foot in the ground and get north in a hurry.

When watching Herbert, I see a lot of veteran NFL running back Lamar Miller.

Herbert has the obvious overall production coming out of college, is relatively durable having dealt with only hamstring issues in college, and has the versatility to excel on special teams as a return option.

I do have my concerns with his lack of production as a pass catcher, having not caught more than 10 passes in a season in his five years of college. Add in the fact that his technique and strength in pass protection are major concerns, and I believe he’s best suited to be a clear-cut No. 2 in a ZBS offense, allowing him to be a change-of-pace weapon.