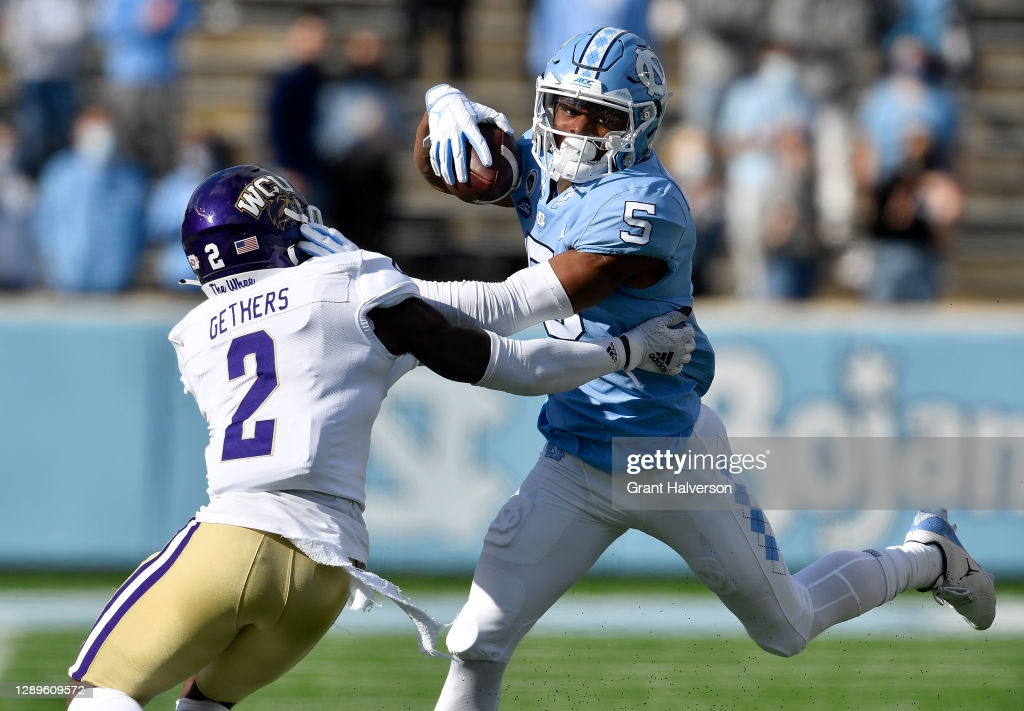 Newsome had a nice career at North Carolina and spent the majority of his time in the slot.  He occasionally lined up outside, on the wing and in the backfield flanking the quarterback. Watching him made me think of a former Steelers receiver.

As a receiver I can say he ran more pre snap motion than just about any receiver I have ever watched. In the slot he faced mostly off Man coverage.  He has a very good release varying it often throughout each game to keep the defender guessing.  He used a shuffle, stutter step, stalk release and even a walking release on shallow crossing routes. He has good acceleration to run up the toes of the defender and uses his hands well to swipe and chop to keep his body clean.

He separates well by varying his release speed, using speed and quickness out of breaks and by manipulating defenders with his route running. He uses his very good change of direction to hit the brakes and let the defender go by on whips and sluggos. He has a solid understanding of Zone coverages and where to sit down to get open.

He was used all through the route tree. He ran screens and fly routes behind the line of scrimmage and wheel routes from the backfield. In the short area he ran quick in/outs, slants, whip and shallow crosses. In the intermediate he ran digs, outs, hitch and curls. He drops his hips well to stop on come back routes. On the deep level there were corner, post, drive and slot fade routes with the slot fade being the most successful. He works hard in scramble drill to find open areas to help the QB.

He adjusts well to the ball in front, behind and low and tracks the ball well over his shoulder. He has good concentration to make catches in traffic and take a hit. He has very good burst after the catch and gets up to speed quickly and has solid agility to make a defender miss or slip through the arms of defenders.

Vs Virginia Tech, he’s not afraid to work in the middle of the field.  He runs an in route and will settle between the linebackers. He makes the catch and gets sandwiched but holds on.

At Florida State, the ball doesn’t come his way here but his release is really good. He is second from the bottom and he jabs outside and gets the defender to open his hips and he is by him in a flash on the corner route.

Vs Wake Forest, this is a simple post route to the middle of the field and he takes it to the house.

Vs Notre Dame, he takes a little swing pass to the left and shows his acceleration to get up field quickly for a 20 yard gain.

Vs Texas A&M, he’s the middle receiver to the top running a slot fade.  He starts his release at one speed and accelerates to get by the defender while hand fighting and shows very good concentration to bring down the touchdown.

On running plays, he is a feisty blocker and wants the running back to come to his side. If you watch him you’ll see him waving his arm in a come this way motion hoping to get to block somebody.  Very good effort to block for teammates and he sets up early with a good base and pad level. He has solid hand usage to try to direct where he wants the block to go and displays good effort to sustain the block.

Vs Virginia Tech, here is an example of his blocking effort. From the slot he’ll angle himself to wall off the slot defender and ride him downfield before getting a push on the safety.

He looks lighter than his listed weight. He didn’t play a lot against Press coverage and defenders were able to use physicality to knock him off his routes. He may be limited to only playing in the slot. High throws above his head gave him some trouble. I saw three balls go off his hands. After his hip drop on comeback routes I saw him stumble a handful of times either slipping on the turf or not having his legs under him. He doesn’t break tackles with physicality. Adequate play strength overall.

Vs Texas A&M, he’s in the slot and route is really good. Acceleration with a press inside before cutting outside. He swipes the hand of the defender and then drops his hip and give the DB a push and comes back to the ball.  But the throw is high and it goes off of his hands.

Overall, Newsome has a good release and is a good route runner who can be used on all three levels and create after the catch.  Watching him, I got some Antonio Brown vibes with his route running and effort to find open areas.  He may be limited to the slot and could add some play strength to deal with physical DB’s.  I’m curious about the throws over his head and if that will be an issue for him. He’ll be a fine slot and should be able to help a team right away in the slot and possibly as a punt returner.