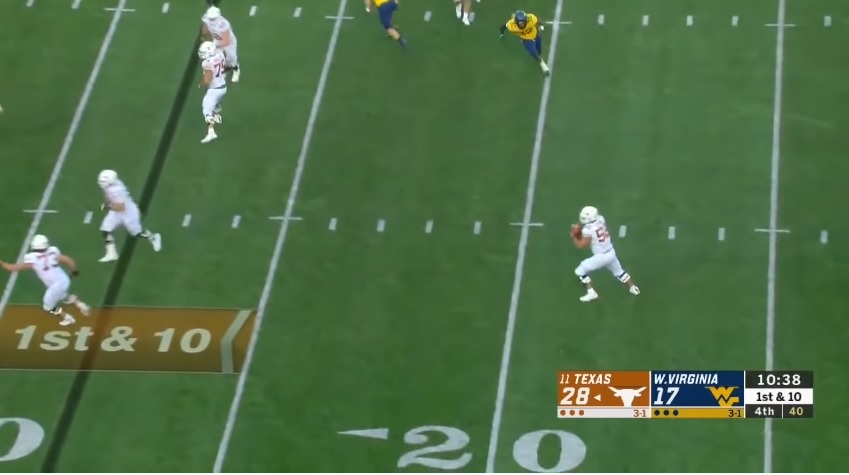 – Great feet and good mobility, feet never go quiet in run or pass game
– Drives feet on contact in run game, may lack innate power but plays with good technique to run feet and drive through whistle, creating movement
– Plays with an edge and looks to finish his blocks
– Excellent grip strength in pass pro, battle is over when he locks on, plays with tight hands and good placement on his punch
– Anchors in pass pro and stalls out bull rushes well
– Hands and feet work together well in pass pro
– Moves well laterally, good balance, patience, and doesn’t panic against counters
– Good eyes/vision in recognizing and picking up stunts and blitzes
– Experience at both tackle spots, lots of starting experience overall

– Listed frame looks impressive but doesn’t look quite as big on tape, length is a question, looks average at best
– Lacks brute strength and gets by more often with technique and leg drive
– Tends to fall off contact in run game, especially on down blocks when he gets overextended
– Seems to “catch” a bit too much in pass protection, set is a little clunky and on his heels a little more than you’d like
– Poor cut blocker
– More vulnerable to losing on inside counters by pass rushers
– Will have the occasional ugly rep

Cosmi is part of the top tier offensive tackles in a very deep class. He isn’t projected to be the top tackle taken, and probably not the second, potentially putting him in play to make it to the Steelers’ pick at #24. So it’s worth taking a deep dive look into his game.

Cosmi has great feet. They’re always pumping, run and base, and never go dead during a play. That allows him to generate power and movement in the run game and slide laterally in pass pro. Couple examples of each. In this first clip vs TCU, he’s able to bend and seal the edge after the RDE gives an inside head fake. And in the second, he buries him along the edge.

And here, he makes quick work of the blitzing LB. Cosmi is playing RT in this clip, taking on #1 from Texas Tech.

As the left tackle in both these clips, watch him bury #90 in the run game here. Dumps him along the sideline. And in the second clip, he runs the DE/LB off screen.

And he has great play strength. I don’t think in a weight room, he’s the strongest offensive linemen in the world pound for pound, but his technique and ability to lock on in pass pro is impressive. He’s able to sustain and win throughout a rep and at times shut down pass rushers. Guys almost look like they get tired and just stop fighting.

And he’s pretty athletic. Anytime an offensive linemen finds the end zone, we’re showing you the clip. He caught a throwback pass (technically considered a run) against West Virginia in 2019 for a 12 yard score.

On the negatives, I do think his pass set is a little clunky and he plays on his heels a little too much. It causes him to catch more than I’d like to see in pass protection, though he has the anchor, strength, and feet (sometimes you have to give ground against bull rushes in order to reset and anchor again) to hold on. This is one of his worst reps. At LT, he gets run over. Wish I had the All-22, end zone view of this.

While he looks to finish in the run game, it’s more of a product of lower leg drive than being naturally strong. Cosmi has a tendency to fall off in the run game too often and lose his block, especially when stepping down on down blocks where he can’t square up into the chest of the defender like he can on base blocks. Couple examples here vs TTU in 2018. Also evident in 2020 against TCU, probably the worst run-blocking tape I watched of his.

And he can have some flat out ugly looking reps. He is most vulnerable to getting beat by inside counters after setting for a speed/outside rush. But here, he bends at the waist and loses the edge.

To be honest, I’m mixed on Cosmi. There’s some really impressive reps, some that make me think he’s a starting left tackle in football. Overall, he’s a technical player and a good athlete, an impressive combination to work with for an underclassmen tackle. But I don’t know if I’m completely sold on him for the NFL level. Cosmi could be the classic case of a really good college offensive tackle who might not have all the physical traits to have a great NFL career. The comparison who comes to mind, even before searching comparable height/weight/career arcs, is Eric Fisher. Former #1 overall pick who never became the best player in the draft and certainly has had some down moments in his career. But to his credit, he stuck in the league and been a long-time starter. I’m not sure if that’s convincing enough to draft Cosmi at #24 but he’ll be in the mix.