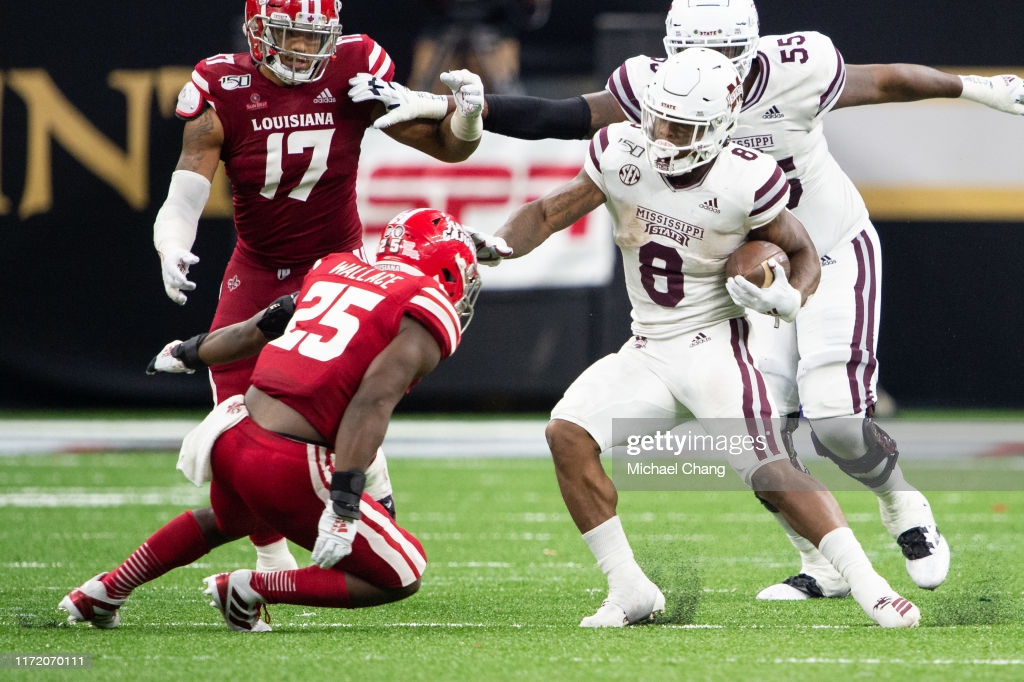 – Thickly built, muscular build, bowling ball frame
– Good burst and acceleration, quickly reaches top speed, shows quickness in his game to win in space
– Uncommon use as a receiver in 2020, part of Air Raid offense, and forced to become comfortable running routes and catching passes, making plays in space
– Good hands, plucks away from body, able to make tough grabs away from his frame
– Tough runner, seeks out contact, looks to finish the play and prefers to gain extra yardage through contact than duck out of bounds
– Flexed out and comfortable being detached from formation
– Fluid route runner who creates space at breakpoint
– Gets skinny through the hole as a runner, vertical approach and doesn’t dance around
– Flashes power and can bounce off defenders when he’s up to speed
– Threat after the catch, able to run through arm tackles and has explosiveness to win in open field
– Squares up in pass pro and holds his own, gives good effort
– Great ball security, almost never put the ball on the ground
– Productive junior season as full-time starter
– Solid starting experience

– Has power to win 1v1 but often needs to get up to speed to show it, average effectiveness between the tackles trying to churn out yards, works hard and drives leg but doesn’t always create movement
– Shows burst and good speed but lacks second gear to run away in open field
– Can be overwhelmed in pass pro vs blitzing LBs up the middle, struggles to sustain block
– Occasional dropped pass, most often when he doesn’t look ball in and tries to get upfield too quickly
– Weird senior season, caught more passes than carries before opting out
– Didn’t miss much time but often nicked up by injury, in part due to physical run style
– Unlikely to be full-time starter, only one season in that role

Kylin Hill is a back with a skillset unlike most in this class. Though it was for only three games, and I suspect this is one reason why he opted out so early, Hill was a running back in Mike Leach’s Air Raid offense. Which is to say, he didn’t do a lot of running. In Week One against LSU, Hill caught eight passes for 158 yards and a touchdown. Two weeks later against Kentucky, he caught an insane 15 passes in an otherwise ugly loss.

His 23 receptions in those three games (and essentially two, he didn’t catch a pass in limited action Week 2 vs Arkansas) were more than he had in any season in his college career. So he didn’t sign up or was born to be a receiving back but the offense he briefly played in forced him to become one. And he looks comfortable doing it. Hill has good hands and makes tough grabs outside his frame. Not too many backs making plays like these.

He’s a bowling ball runner with power and toughness. Hill isn’t one to go out of bounds. He’d rather seek out the hit and dish out punishment, which is a positive but does lend itself to higher injury risk and more wear and tear. Like these two clips against Alabama, which are especially notable because his team is losing 35-7 and the game is already over.

He also can straight up run guys over once he gets up to speed, though if you catch him at the line of scrimmage, he’s much more manageable to bring down.

But he isn’t overwhelmingly powerful and can’t always push the pile forward. And in pass pro, Hill shows effort and a desire but doesn’t always get the job done. Watch him fall off the blitzing LB (#23) against LSU.

And 2020 was an odd year to end a college career on. Three games, sat out the next two, and then declared. Sure there were a variety of reasons for that, COVID, injury/injury risk, but being a RB in a pass-first offense likely also played a role. To hopefully no one’s surprise, he was used more like a receiver than a running back under Mike Leach.

But Hill is an interesting dude. I don’t see someone who is a full-time starter but he has a well-rounded game and was fun to watch on tape. Having trouble finding a comparison that suits him especially well but sorta reminds me of Knowshon Moreno. Regardless of comp, an interesting later Day Two option if the Steelers don’t take a RB early and there’s a run on the position in the middle of Day Two.