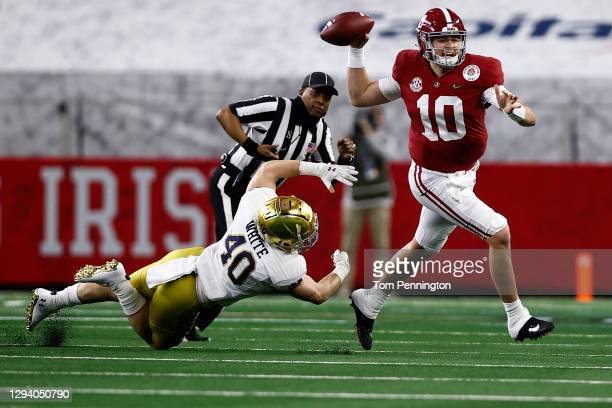 – Average to slight build
– Can get passes batted by DL due to below average height
– Does not have top shelf arm, throws 50+ yards can be underthrown, most comfortable in the 45-50 range unless given absolutely clean pocket
– Occasional inconsistency with accuracy, tendency to miss high when he’s off-target
– Average to below average mobility, can extend plays/scramble but not an open field threat, defenses won’t have to gameplan for his legs
– Want to see more consistency with center/quarterback exchange, couple miscues in games watched
– Questions/concerns about verbal cadence, lot of gestures and clapping at the line
– Surrounded by great talent and weapons
– Not a ton of starting experience, one-year as full-time starter

I wasn’t sure how to feel about Jones before diving into his tape. Was he your typical pocket passer QB with a limited ceiling or could he be something more? By the time I finished watching him, I’m firmly in the latter camp. Jones may not be the most physically gifted quarterback but he has staying power in the league.

No, Jones doesn’t have the arm of Patrick Mahomes, Josh Allen, or Aaron Rodgers. But his arm is good enough to make every throw an NFL offense is going to ask him to make, aside from maybe a 4-verts, Bruce Arians type of attack. Noted this in my Kyle Trask report but one of the hardest throws for a QB, one that really tests arm strength and velocity, is the sideline throw from the far side hash. Especially in college when the hash marks are wider than the NFL. And Jones can hit it. Two examples of that against Florida this past season.

His arm strength maxes out around 50 yards but he shows placement, accuracy, and got the job done at Alabama with some speedy receivers to throw to. First career start against Arkansas in 2019, a dime for the score. 50+ air yards. And a couple other examples added in after just to show it wasn’t a one-off thing. Check out the first throw in the third clip. From the far hash and it’s a dart.

Jones has a great feel in the pocket. Plenty of subtle movements that allow him to by time. There’s the obvious like hitching and climbing up into the pocket when feeling pressure around the edge. But even things like sliding a step to his left to buy him an extra half-second are traits any good QB in today’s NFL needs to have. Jones does. First clip shows him sliding to his right, climbing, and making an on-target throw in the face of pressure. The second one is an even better example. Free rusher off the right side. Jones slides to his left, keeping his eyes downfield, and buys enough time to hit the shallow cross to the WR and allowing him to run after the catch.

Overall, he’s a very accurate passer with a quick release, great placement, and puts the ball on the money. Lot of RAC catches, allowing his receivers to do damage after the catch. This throw is about as accurate as it can get to the point I’m shocked it was actually caught (and I think his receiver was just as surprised).

Jones isn’t an overly mobile quarterback but it’s enough to get by. Moreso than a guy like Trask. He’s probably a 4.8 type of guy who hey, was pretty good on QB sneaks. That alone would be a breath of fresh air in Pittsburgh.

There weren’t a ton of consistent negatives that popped up in his report. Times where his arm strength was limited and some deeper downfield throws were underthrown. Jones also would occasionally have some poor accuracy. Hard for me to pinpoint the reason. One thing I noticed is that when he missed, even when the pass was caught, the throw tended to be high as opposed to low or too far behind/in front.

And the obvious. He played on arguably the best team in college football the last two seasons. Littered with talent, especially at WR. Quarterbacks tend to look pretty good when they’re throwing to Jerry Jeudy, Henry Ruggs, and Heisman winner DeVonta Smith.

I would love to have a discussion with Jones about his cadence and verbiage he used. Lot of hand motions and clapping at the line of scrimmage. Wonder how much talking he actually did. That could be an adjustment at the NFL level.

Overall, I came away more impressed with Jones than I expected to be. He and Trask are somewhat cut from a similar cloth. But Jones is an even better anticipatory thrower with greater pocket movement, mobility, and arm strength. Jones was also basically just a one-year starter so he can get better as he gets more experience.

Naming anyone the next franchise quarterback is a Babe Ruth point-at-the-fence shot to call. Doing it for anyone outside of the top, can’t-miss prospect is a roll of the dice. But I think Jones can be that guy.

Ok, get ready for some heavy NFL comps. In a best-case scenario, Jones could be the next Drew Brees. Smart, ultra-accurate passers with great instincts and intangibles. In a more realistic scenario, I would compare Jones to Andy Dalton. I know that sounds like a bad thing coming from a Steelers’ fan perspective but I promise it’s not. Dalton was a good QB on some mediocre teams. Of the QBs drafted since Dalton was taken in 2011, only Russell Wilson and Cam Newton have a higher Approximate Value.

Overall, I’m a fan of Jones. If the Steelers feel the same way though, they’re likely to need to trade up to get him. Probably won’t slip to #24.

Games Watched: vs Arkansas (2019), vs Michigan, vs Texas A&M, at Tennessee, vs Mississippi State, vs Florida