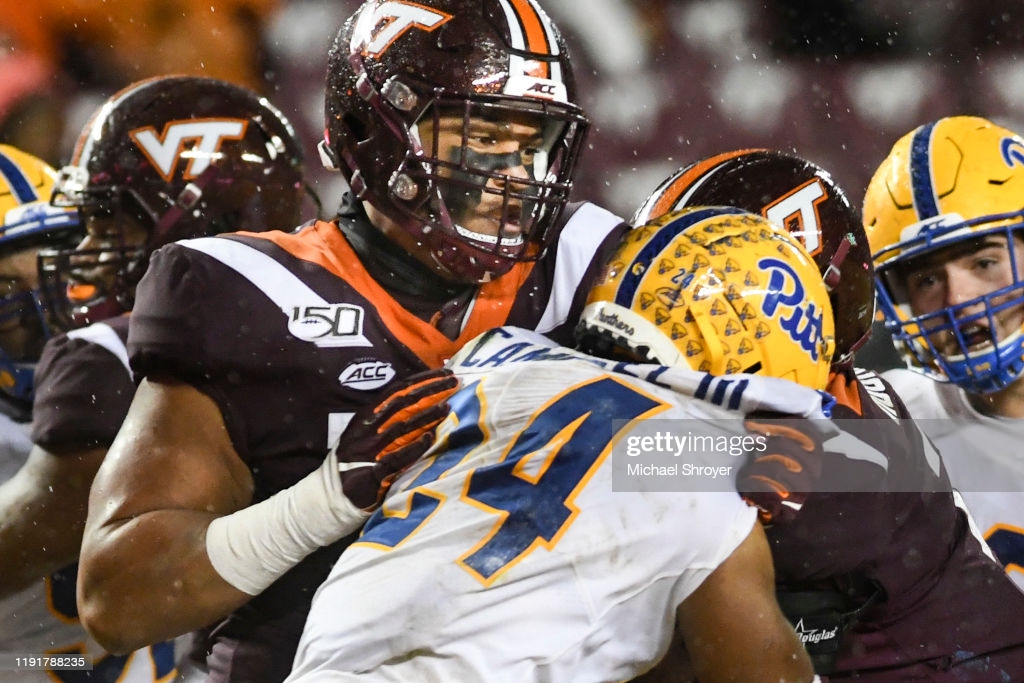 -Athletic specimen at tackle with great feet and hands
-Gets into his sets quickly and sits into his hips well in pass protection
-Comfortable working in space in pass pro and run blocking
-Usually on schedule in his pass sets; technique is very good overall
-Clear edge to his game, especially in run blocking
-Good length overall with powerful initial punch
-Rarely penalized; just three penalties in last two years; started as a true freshman in Blacksburg
-Creates noticeable movement in the run game
-Fluid hips on the move in the run game

-Can struggle with speed rushers at times when caught off guard after quick set, allowing soft edge
-Plays with high pad level overall, which causes him to struggle unlocking power at times
-Shows tendency to throw hands late, allowing rushers into his frame
-Feet can get off schedule late in games, causing him to lunge and bend at his hips
-Feels specifically like a zone-blocking scheme left tackle only

-Played in 34 career games at Virginia Tech, starting all 34 for Hokies
-Named a 24/7 Sports Freshman All-American in 2018
-Earned Athlon Second Team All-ACC and Phil Steele Third Team All-ACC in 2019
-Named First Team All-ACC in 2020
-One of the top graded tackles in college football in 2020, according to Pro Football Focus

In a deep, deep offensive tackle class, Virginia Tech’s Christian Darrisaw might have the highest ceiling of them all.

He won’t be the first tackle off the board – not by a long shot — but he has a chance to be the best tackle in the class down the road when it’s all said and done.

A starter at Virginia Tech under Justin Fuente as a true freshman, Darrisaw got better and better every year, developing into one of the top tackles in the 2021 NFL Draft, which should have him as a lock for a top 15 pick in late April.

One thing that stands out right away with Darrisaw is his athleticism in space.

He’s a very large man, but he moves so, so well overall in space. He’s an easy mover, meaning he doesn’t labor to get his body going. Virginia Tech really took advantage of Darrisaw’s athleticism on screens, and utilized his feet and power on zone runs.

Look at the power with which Darrisaw throws his hands. His athleticism allows him to climb to the second level and maintain his balance after throwing the North Carolina defenders around. His hit rate overall getting to the second level is terrific as well, which is what you want to see from an athletic lineman that you want on the move often.

It’s very noticeable how powerful his initial punch is, and how much movement he can create along the line of scrimmage.

The power in the hands is incredible, paired with his clear length. If you’re in a zone blocking system and want a guy who will move people off the line of scrimmage, Darrisaw is your guy.

He plays with high pad level often, but his brute strength is impressive. If his next OL coach can get him to play through his hips and legs more in the run game, look out.

He gets into his pass sets so well with good initial depth and quickness, cutting the corner off. Virgina Tech didn’t have a traditional passing attack featuring a drop-back passer that forced Darrisaw to hold up in pass protection a long time.

That said, he has the obvious footwork, great length and overall athleticism to succeed in pass protection long term at the next level.

He’ll have to work on varying his pass sets so as to not let rushers hone in on what he’s doing presnap, but the obvious improvement year over year in college leads me to believe he has the highest ceiling of the bunch in this tackle class, and one well worth a top 15 pick.