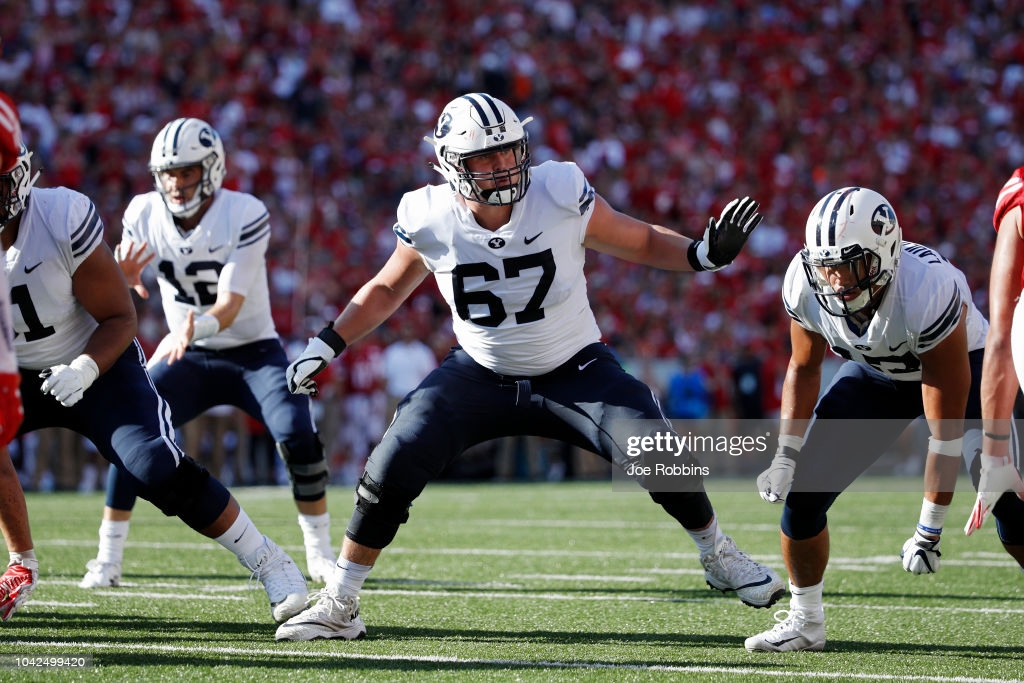 -Heavy feet in pass protection and is vulnerable to counters
-Speedy, athletic pass rushers present serious problems off the edge
-Very limited in space; heavy mover that looks uncomfortable on the move
-Length overall is just adequate; lets defenders into his chest too often
-Projects inside at the next level despite never playing inside in college

-Redshirt junior who started 38 consecutive games after returning from a mission in 2017.
-Helped protect the blindside of one of the top quarterbacks in the country as BYU had a prolific offense in 2020
-Graded out as the 12th-best lineman in college football as a redshirt sophomore by Pro Football Focus metrics
-Was again one of the top linemen in the country, per PFF’s metrics
-Named a Consensus All-American in 2020, becoming one of just two linemen in the country to accomplish that feat in 2020

While Brigham Young’s Zach Wilson stole the headlines in 2020 for the Cougars, longtime starting left tackle Brady Christensen was quietly one of the top linemen in all of college football, according to Pro Football Focus’ grading metrics.

He’s not the flashiest linemen in the country, and he’s certainly nowhere near the most athletic, but what he is, is a technically sound tackle who should be able to carve out a career in the NFL as a swing tackle, and possibly even a guard in a run-heavy system.

In his pass sets, Christensen was at his best when he was the aggressor, quick setting to throw his initial punch and win early control.

Here against Houston to open the 2020 season, Christensen got a quick set on the Houston pass rusher, moving out to meet him on the wide set. Once he’s there, his initial punch allows him to gain control inside, allowing him to overpower the Houston defender, negating any sort of pass rush he might have put together.

Again, Christensen sets quickly and throws his hands early, allowing him to gain control quickly in the pass set. Once he’s locked on, he’s able to run defenders up the field and overpower them, taking them completely out of the play.

Christensen does struggle against more athletic rushers, which will be a significant problem in the NFL if he’s left on an island often.

When he’s against more athletic rushers, Christensen tries to mirror, rather than locking on. When he tries to mirror, he simply doesn’t have the foot speed and lateral athleticism to hold up against the speedier rushers.

You can see he tries to mirror here, holding off on throwing an initial punch. That opens up his inside to a counter, allowing the pass rusher to slip by easily as Christensen ends up on the turf, giving up the sack.

I do like the way Christensen moves people off the spot as a run blocker. He’s very physical overall and does a good job locking on and driving the defender off the ball, playing through the whistle. He was rarely asked to work downhill at BYU in their run game down the stretch as the Cougars relied more on Wilson’s arm. I think Christensen could be a strong option in a power run game with his size and power.

In space though, Christensen really struggles.

While he does a decent job overall getting in the way of some defenders, you can tell he’s laboring to move in space overall and reaches to get a hand on the defender, rather than letting his feet take him to the point of contact.

It’s worth noting the Cougars rarely asked him to get on the move in the run game, and really only asked him to work in space on screens. It seems like they knew his limitations and tried to keep his usage there to a minimum.

Overall, I do think Christensen could serve as a longtime swing tackle in the NFL. He’s an incredibly smart linemen who has a powerful punch, holds up well against power rushes and is very durable overall.

That said, he’s so limited athletically that it could really hinder him long term, at least from what I saw on tape in 2020. It’s worth noting he’s been working all off-season with standout lineman coach Duke Manyweather, who consistently works with some of the top tackles in the draft class each year.