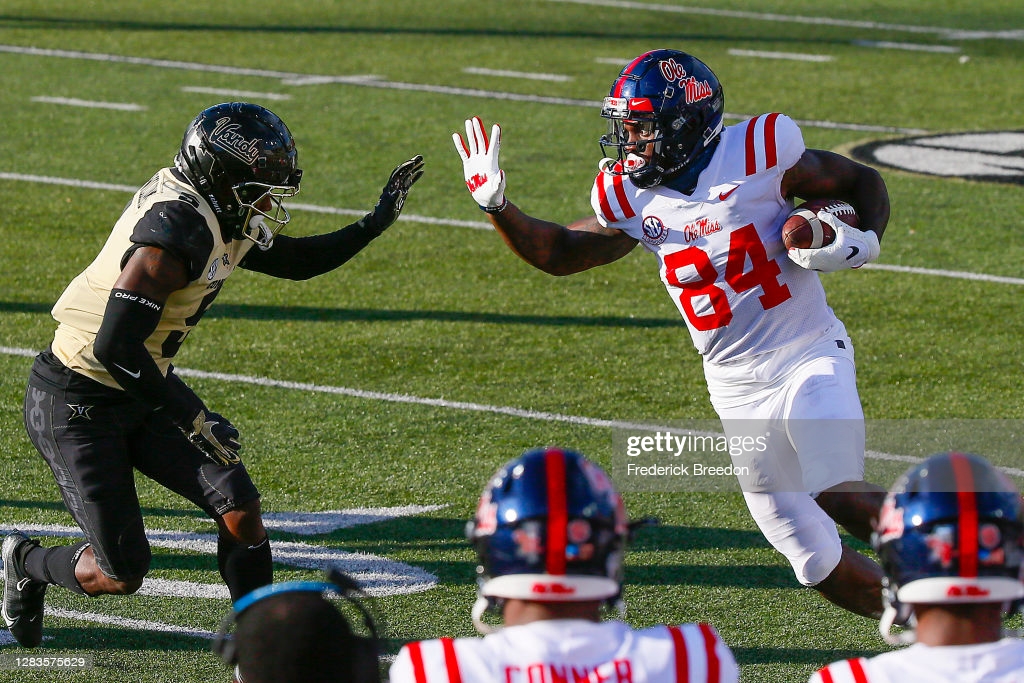 – Decent frame with very good length (33 1/4 inch arms)
– Uses size to his advantage, hard to bring down in open field
– Build-up speed player, capable of being a vertical/seam threat
– Tracks ball well and able to make difficult catches
– Experience in pass pro, uses frame well and able to slide and seal the edge against speed rushes
– Willing blocker who shows effort, some work out of a three-point stance as in-line blocker
– Able to engulf and wash out DBs as a blocker in space
– Productive 2020 season, has nose for end zone

– Below average blocker who works hard but lacks strength and power on contact, falls off too easily on blocks
– Runs tall and high, stiff-hipped who struggles to separate when asked to change directions, best used in a straight line
– Schemed open in offense, tape isn’t as impressive as numbers
– 5th year senior who didn’t catch a lot of passes in college
– Much more explosive standing up and flexed out than as an in-line player
– Straight line speed is average to a little above

Yeboah immediately got put on our draft profile docket after the report Kevin Colbert showed interest in him during the Senior Bowl. Yeboah had a good week down there so he’s someone worth visiting prior to April’s draft.

Yeboah was a big-play machine in college and made his catches count. 2020 at Ole Miss proved that. 22% of his receptions went for TDs while he averaged over 19 yards per grab. To put things into perspective, Yeboah’s career 16% TD rate is comparable to Kyle Pitts’ 18% while their YPCs are also very similar. Yeboah at 14.4, Pitts 14.9.

At his best, Yeboah is a downfield, build-up speed player. And his size can create an obvious headache downfield.

He uses his size well too. Plays big as a receiver. Two clips of that. In the first, he’s able to shed two Tulane tackles (this is 2019 at Temple) for the TD. On the other vs Ole Miss, he’s able to use that size and length to extend and stretch over the goal line.

But his stats aren’t as impressive as they are when you watch the tape. Perfect example of that is against Alabama in 2020. Gaudy, seven catch, 181 yard, two touchdown performance. But his TDs came on a goal line pop pass and the other a long score but one that came when the Bama safety took a bad angle and got burned trying to jump the over. I can’t hold that against Yeboah, of course, but he doesn’t feel as dominant as say, Pitts, or even some of the other TEs I’ve watched in this class.

Yeboah tries to make the most of his frame and size as a blocker and he can wash out smaller DBs. But he struggles on base blocks and he falls off too easy.

Yeboah feels like 80% of the tight end reports I write. Good size, willing blocker, vertical threat, but rigid athlete who won’t create much movement in the run game. There’s something to work with him and he knows how to use his size but I don’t think he’s a future #1, can’t-miss type of tight end. My NFL comp? Former Cowboys’ TE Gavin Escobar.

Games Watched: vs Tulane (2019 – with Temple), vs Florida, vs Alabama, vs South Carolina