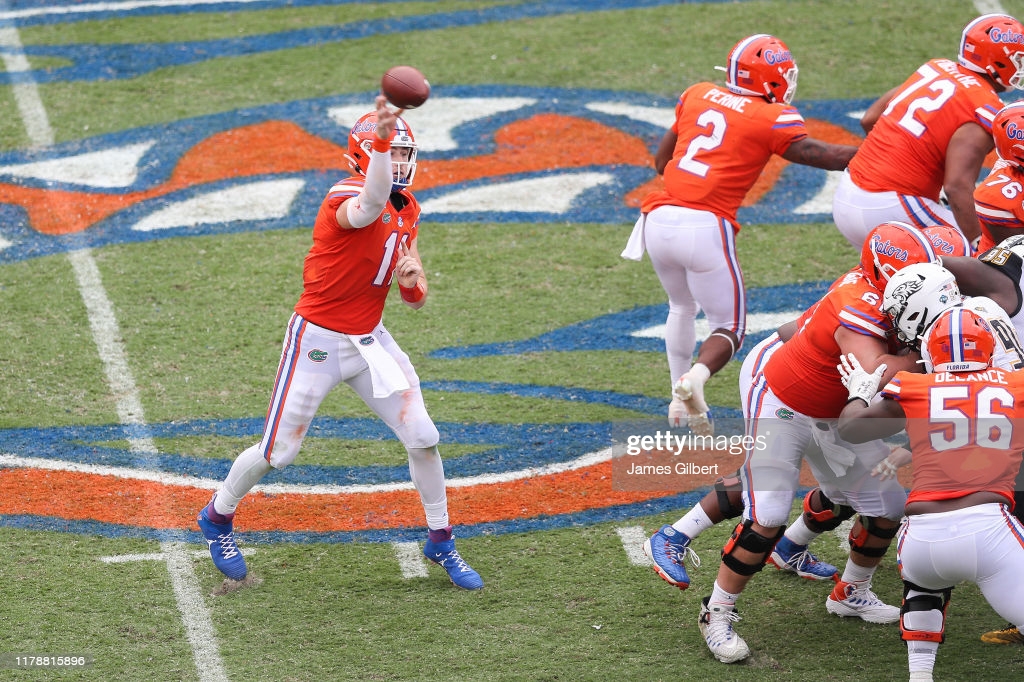 – Great size, frame, looks the part of an NFL passer
– Consistently accurate thrower
– Shows great touch on all passes, especially downfield and outside the numbers
– Great ball placement and throws receivers open, very good on out-breaking and sideline throws
– Anticipatory thrower overall
– Ability to stand tall in pocket and make throws under pressure
– Capable of going through progressions, making full field reads, and finding checkdown
– Tight, quick release
– Highly productive against SEC competition, improved from junior to senior season
– Experience working under center in addition to out of shotgun
– Detailed player, takes pride in little things, consistently carries out playfakes and boots on all plays
– Overall good ball security, didn’t fumble often (only saw one in games watched)
– Appears to be a good teammate, gets excited when other guys make plays, even when he’s on sideline or not playing well
– Tough player, size helps him break out of sacks, barrel forward on runs, physical and willing to block for someone else to make a play

– Pure arm strength is average, doesn’t have a ton of zip on his throws
– Marginal athlete, not an asset on designed QB runs, enough mobility to extend plays and execute boots/nakeds but won’t make many plays with feet beyond LOS
– Tends to drift backwards out of pocket when forced to hold onto the ball, invites more pressure and makes life tougher on OTs
– Can get tunnel vision and miss underneath zone/hook defenders on short/quick game and RPOs, causing forced throws over the middle
– Will make some poor decisions downfield, throws too many jump balls down the seams and average arm strength creates too many underthrown passes
– Occasionally will throw late, allowing DBs to jump and make plays on the ball
– Average starting experience
– Always played in warm weather, has yet to play games up north

Our first QB player profile of the year. More are coming given the increasing odds the Steelers draft Ben Roethlisberger’s heir. Beginning with Florida’s Kyle Trask, an easy guy to root for. Great story, hard-worker, earned all the success he’s had. But we’ll talk about that more in a minute.

From an on-field perspective, Trask’s best traits are his accuracy and ball placement. Two of the most important components any quarterback must have, even in this shifting landscape of mobility and off-platform throws. Trask does a great job throwing his receivers open especially on the most difficult downfield throws. Couple examples of that.

Great throw on this TD to Kyle Pitts. Upfield, outside shoulder where either his guy was going to make the catch or the ball was going to fall incomplete. Perfect.

And two throws against Vanderbilt. First is a beautiful corner/7 route over the sinking Cover 2 corner. Second is a nice touch throw to beat zone despite pressure in his face. Ball falls into the receivers lap in the perfect spot between the two defenders.

And he’s able to stand tall in the pocket and make plays under pressure. Every QB struggles more with the rush coming at them, Trask is no exception, but his size and fearlessness allows him to hang tough and make the throw. Unfortunately, his receiver doesn’t finish the play here.

He’s also a detail-oriented guy. Obviously, teams will get to know him a lot better than me from afar but if he carries himself off the field the way he does on it, there won’t be any concern about work ethic, doing the little things, and honing his craft. Trask consistently executes playfakes, even on run plays, and finishes his rollouts. He’s always trying to do the small things to manipulate a defense’s eyes. Executing great fakes was one coaching point in one of the Matt Canada clinics we recently highlighted. Compilation of what I’m talking about. Don’t watch the ball, watch Trask the whole way through.

And he’s a good teammate. Even in the worst game of his career, the bowl game against Oklahoma this season that saw Trask on the sidelines for big chunks of the game, he was excited and cheering his teammates when the Gators (briefly) made the game competitive. Salt-of-the-earth story going from high school backup who bided his time, managed to pull an offer from Jim McElwain and Florida’s new coaching staff (not often your offers are Florida and three FCS schools) battled injury, cracked the starting lineup, and become a top-five Heisman finisher.

Even that horrible bowl game should come with context. His top four receivers, including TE Kyle Pitts and WR Kadarius Toney, opted out to get a jump on draft season. Trask decided to play, props to that, even though the Gators were undermanned and blown out. Two of the three INTs Trask threw in that game aren’t really on him. One was a slight miscommunication with the backup TE that clipped off his hands while the other came on a pressure-induced jump ball in the end zone.

Dude’s going to keep working in the NFL, I’m guessing. Any failures he has won’t be for a lack of effort or mental fortitude. Betting this guy will impress coaches and scouts in the pre-draft process.

Now to the negative. I would compare his NFL arm to Mason Rudolph’s. Maybe a tad weaker. But it’s about average to a little below though he shows great touch and placement on those throws, which is Rudolph’s best downfield trait. Even on shorter throws, he doesn’t show upper-level zip and velocity. He’s also prone to tunnel vision, especially on slants and RPOs, which can cause him to miss underneath zone defenders. Occasionally, he throws a YOLO ball to the middle of the field and he doesn’t have the arm strength to get away with it. Clips of both here.

One of the hardest throws to make is the far hash out. Really tests timing and overall arm strength. Against the Sooners, he throws late but also doesn’t have the arm to get the ball in time. Cornerback jumps it and makes a house call.

Though he’s a big guy who isn’t easy to bring down, he’s not even at an early-day Roethlisberger level of mobility. He’s a pocket passer whose functional on boots and things like that, he’s certainly more mobile than present-day Roethlisberger (a low bar to clear) but he’s not someone who fits well with the QB run-game aspect of Matt Canada’s offense. In fact, Florida used backup QB Emory Jones for some of their QB option packages. Jones had more rushes (32) than pass attempts (18) to illustrate that.

Quarterback comps are always tough to do just like evaluating the position is. The best I could come up with, the only name who really stuck out to me, was Nick Foles. Foles is a big guy (6’5, 243) like Trask with limited mobility. Both Texas natives who played college ball in the South. Foles ran 5.14 coming out of Arizona and I would expect Trask to run a similar time at his Pro Day, maybe a little faster (Pro Day times are generous to the player). High-character, hard-working dudes. Trask’s career arc could be and hopefully will be better than Foles. I like a lot of his game. The accuracy, the anticipation, the ball placement, and this dude’s a gamer. But I’m not getting a “this is the face of the franchise for the next 10 years” kind of guy. That’s hard to find when looking past the top 1-3 QBs in any draft class but I see Trask as a good, not great, starter. He’ll get your team to 9-7, 10-6, but I don’t know if he’s quite good enough to put a team on his back. And his lack of mobility doesn’t mesh well with the direction today’s NFL is going.

Games Watched: vs Georgia (2019), at Ole Miss, at Texas A&M, vs Georgia, at Vanderbilt, vs Oklahoma