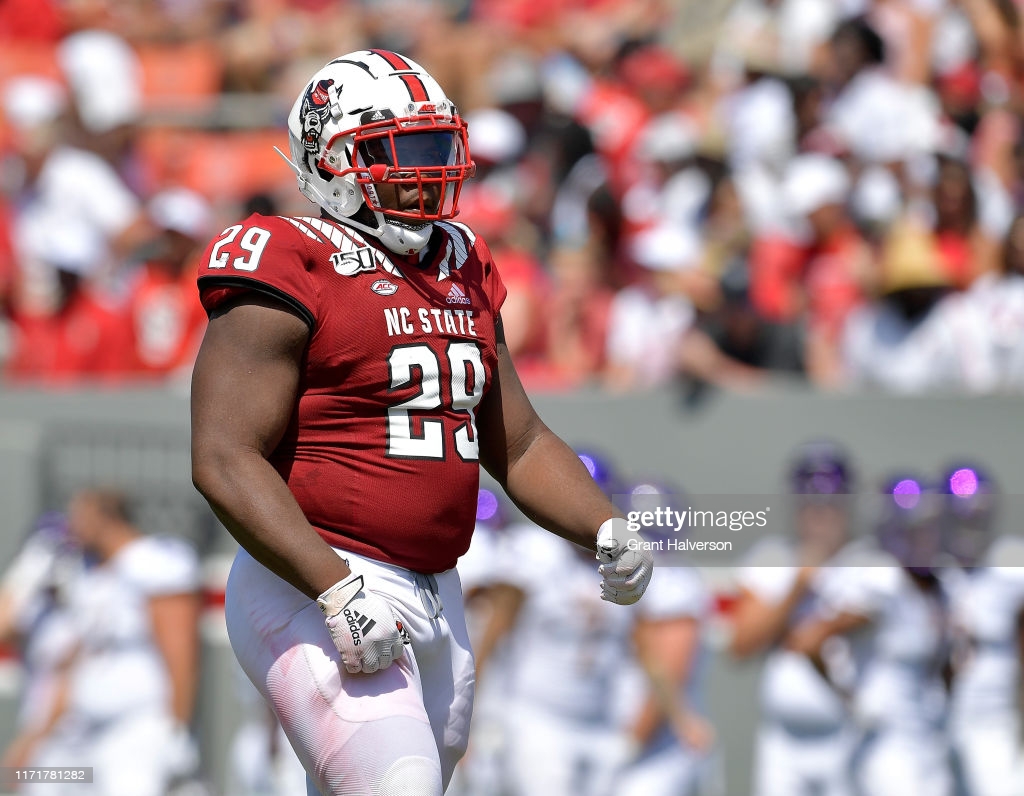 McNeill is entering the NFL draft after his junior year.  He has been the anchor in the middle of the North Carolina State’s odd front defense over the past couple years. For the most part he aligned right over the center but had some snaps at the 3 and 4i technique positions.

As a pass rusher, he has good quickness at the snap and has good hand quickness and placement.  Throughout his game you will see his very good play strength come into play.  He has active hands and good hand strength and can latch on to use a push/pull to remove blockers from his path.  He has good leg drive and pad level to bull blockers in to the pocket and will also try a spin move or a rip to attempt to get pressure.  When the pass rush isn’t getting home he will get his hands up into throwing lanes. He has the potential to be a penetrator on stunts and twists to open up rushing lanes for teammates.

Vs Syracuse, he shows good burst at the snap and use his quick hands to pull the center to get him out of the passing lane for the sack.

It’s a rule. You have to show big guy touchdowns.  Against Virginia, with three blockers in front of him there is nowhere to go so he reads the QB and gets his hands up to tip the ball in the air, make the interception and run it in for the score.

Against the run, he is a linebacker’s best friend controlling his gaps so they can attack.  Playing as a two gap defender he uses his quickness, pad level and hand placement to reset the line of scrimmage.  He has the hand strength to lock on and control the center, plays with his eyes up and has the play strength to shed when a runner comes in his gap.  He has very good balance. It was rare to see him on the ground. Against Zone runs his mental processing is good and he reacts to blockers quickly able keep the center from getting across his face and holds his ground while working down the line of scrimmage.  He is very good against double teams. He has got the sand in the pants and is nearly immovable. Once a ball carrier gets in his grasp the play is over, they don’t slip out.

Vs Duke, he displays his quickness to beat the block of the center and get in the backfield to disrupt the run.

At North Carolina, he shows his play strength to lift the center out of his way and make the tackle near the end zone.

Vs Miami, the center and right guard are going to double McNeill to drive him out of the way. He doesn’t move with two guys pushing on him and reaches out with his right arm to make the tackle.

His pass rush plan is limited with marginal lateral agility to stress blockers and he doesn’t have the change of direction to flatten or change his route when he gets around blockers.  They used him as the looper on stunts without much success.  He needs to improve his awareness of down blocks and those coming from his sides. These were the most successful at displacing him. His tackle radius is low.  He’s not going to make a lot of plays outside of the tackle box and is mostly limited to the gaps right next to him.

Overall, McNeill has good quickness and uses his hands well and has the balance and play strength to be and anchor in the middle of a defensive line.  He fits as a 0/1 tech defensive tackle and can play in a 1 or 2 gap scheme.

He is Casey Hampton- like being nearly the same height and weight. He’ll be a stout run defender and while he will occasionally be able to get pressure it is more likely he will come out on passing downs in the NFL. He is someone who will play in base defense 25-30 snaps.