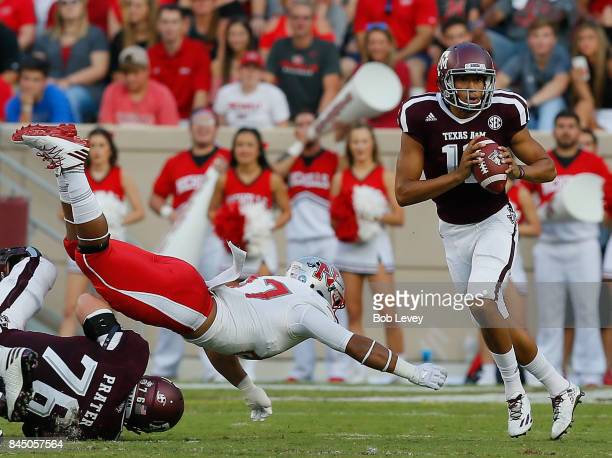 – Athletic player who has both passing and running ability
– Ideal size and arm talent to play quarterback position at next level
– Throws a tight spiral combined with a compact throwing style
– Has arm strength to complete passes at all three levels of the field
– Makes quick, decisive decisions on first and second reads
– Did a much better job protecting the ball his senior season, only finished with three interceptions in 2020
– Showed significant improvement in keeping his eyes up in the pocket and delivering passes on target, off schedule
– Good starting experience against quality competition
– Thrives throwing over the middle of the field and fitting the ball in tight windows
– Shows great touch throwing the ball vertically and down the sideline

– Very inconsistent with accuracy, throws the football too low and at times behind receivers
– Struggles negotiating pressure in pocket, fades back when pressure comes head on
– Does not consistently go through full progressions, if first or second reads aren’t there he takes off
– Locks into pre-snap reads too often, leads to locking in on a receiver causing turnovers and pass break ups
– Struggles resetting feet when forced to leave the pocket
– Footwork needs polish, gets sloppy at times causing errant throws
– Needs to do a better job diagnosing coverage post-snap

Kellen Mond is such an interesting evaluation, because opinions are split on who he is and what he could bring to the NFL team. On one hand, Mond is one of the more experienced starters in this 2021 QB class, having played in 46 career games. He fits the modern mold for NFL quarterbacks, being able to make throws on the move, having dual threat ability and having a strong, compact arm motion.

His inconsistencies have been well documented, but his senior year he put together a solid season where he threw for 2,200 yard in 10 games, 19 touchdowns to three interceptions. He became a much better decision maker with the football and really excelled throwing over the middle of the field.

In this first play against Florida this year, Kellen Mond lays out a pretty deep ball with nice touch to his backside receiver, showing off his arm strength. He connects with his man for a touchdown, displays the ability to run a sprint out concept, set his feet and throw a pretty ball.

One of the prettiest throws on tape is below against Arkansas, Single high cover 3, Mond holds the safety with his eyes and allows his slot receiver to run a double move. He throws it with enough touch and zip to get it to his receiver before the outside corner could re-direct for a potential pass break up. Solid delivery and great throw down the sideline.

When Mond can set his feet and throw the football down the field, he makes throws downfield look effortless. A quick play action fake allows his outside receiver to the left to run a deep post and he does a nice job with ball placement. Hits his receiver in stride over the shoulder for a big gain against Florida. Mond looks really solid when he can make throws to his first or second read.

As mentioned above, Mond can make all the throws to all areas of the field. A simple deep out route, Mond does a nice job driving this ball out towards the sideline and hitting his receiver at the numbers. Arm strength is not a question when discussing who Mond is as a quarterback.

His dual-threat ability opens up the RPO possibility. He shows the ability to make quick, decisive decisions and throws the slant route with proficiency. The clips below show off Mond’s running ability, and how defenses have to gameplan to defend his running ability. Shows quickness getting up field and has some elusive ability in the open field.

What Mond struggles with most is locking in on first reads, leading to turnovers. Against Alabama, that was on full display. Mond is trying to throw a deep out route late, and the Alabama DB makes a quick break and takes the interception back for a touchdown. He stared down his receiver the entire time, showing his unwillingness to move on from his pre-snap read.

Against South Carolina, Mond shows great patience allowing his deep crossing route to develop. However, his footwork is sloppy and he overthrows the pass. Instead of pointing his foot where he wants to throw the ball, he points it up field going the opposite direction of his receiver. Has to clean up his footwork and be consistent hitting those downfield shots over the middle in the deep third of the field.

Again, another good read by Mond in terms of progressions, but he throws the ball late and behind. Instead of hitting his tight end at the top of his break, he waited till he was close to the sideline to throw the football, allowing the defender to undercut the route. Mond has to throw the ball quicker as soon as he knows where he wants to throw the football.

When Mond begins to feel pressure in the pocket, he panics and makes inaccurate throws downfield. Against LSU, which was probably his worst game this season, Mond overthrows the deep out and is nearly intercepted. His footwork was off as well on the throw, fading away and throwing out of his normal leg frame. His receiver is open but he fails to deliver an accurate ball.

However, despite some of the negatives, Mond impressed down in Mobile last month at the Senior Bowl. He looked like the second best quarterback there and consistently made tight window throws. He even went on to win the Senior Bowl MVP after completing 13 of 25 passes for 173 yards and two touchdowns.

Ten things we learned from a #Patriots perspective in the Senior Bowl. Plenty to break down.

While it is unclear how high Mond will go come April, it is clear he has tools to be an NFL quarterback. The modern day athleticism, matched with the arm talent allows him to make throws off platform. Plus, he excels throwing over the middle of the field, something the Steelers did a lot over the last couple of years.

However, Mond has some work to do in terms of the technical aspects of playing the position. Adjusting post snap, going through progressions at a more consistent rate and negotiating the pocket better are things he will need to make strides to potentially become a starting quarterback in the NFL. I see him as a spot starter and backup at this point of his development.

Games Watched: vs. LSU, at Alabama , at South Carolina, vs. Arkansas, vs Florida