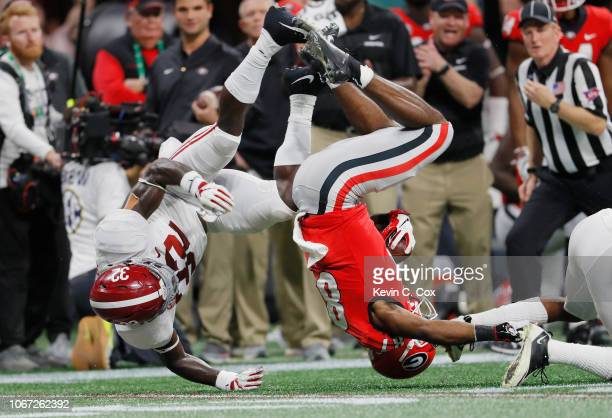 The first tape I watched was Alabama vs Ole Miss. I was quite underwhelmed by Moses’ performance in this game. He had multiple mental errors and showed a general lack of hustle.

On this first clip Moses is aligned in a 30 tech on the shoulder of the RG. The TE Kenny Yeboah is aligned in the backfield. Ole Miss ran a clever trick play, a QB iso pop pass with Yeboah being the target. Moses attacks Yeboah as he leads through the hole but doesn’t get enough contact on him to prevent him from releasing into the Endzone. While I do not know for certain that Moses would have been responsible for him in coverage I would suggest that since he had to collision him in the run game that he would have been his responsibility.

This next play comes from the Q2. The Rebels run a play action boot pass with Moses responsible for QB contain. Once the QB boots out of the pocket Moses triggers to close the distance and make the tackle. He shows good acceleration and closing speed on approach but once he arrives he does a poor job tracking the ball carrier and misses the tackle which results in a big run for a first down.

This third clip was in my opinion Moses’ best snap in the game. Moses is responsible for the A gap between the Center and Guard. Once the Guard blocks out and the Center blocks down onto the Nose the window opens and Moses gets downhill to make the play. This is the strength of his game, his ability to run sideline to sideline and make tackles. These types of plays remind me of Bucs Linebacker Devin White. He has great speed and is once he is able to process the offensive play he can get to where he needs to and make the tackle.

On this clip from Q3 Moses is playing weak inside linebacker. Ole Miss used a clever play action pass to the TE who aligned in the slot to attack the middle of the Alabama defense. Moses is responsible for getting inside and underneath the TE on any vertical routes and the technique he is using is known as Robot. Moses is slow to flip his hips and find his target. There’s really no burst to close on the TE and this creates a window for the QB to fit the ball in. The Safety then takes a poor angle and then collides with Moses and this results in a touchdown. There were multiple plays where Moses showed a lack of hustle in this game and it appears he is almost disinterested.

The second game I watched was Alabama at Tennessee. This play shows what I touched on earlier in relation to Moses’ struggles with blockers, particularly offensive linemen, that are able to attack him on run plays. Here Alabama are in an over front with the Nose aligned in a 2i on the inside shoulder of the Guard. This allows the Center to immediately climb untouched to Moses and block him 5 yards down the field. It’s my view that Moses is better suited as an inside linebacker in a 3-4 team, similar to the Steelers base where the DL prevents the OL from getting to the second level. This would allow Moses to flow sideline to sideline. Another option would be for Moses to play outside linebacker in a 4-3 scheme where he can play in more space and better use his athleticism.

This play from early in Q4 shows off the best of Moses’ game. On this play he is responsible for the RB in coverage. The back swings out late and the QB checks it down to him following pressure. Moses closes at speed and makes the tackle in space for a short gain. Moses is a 4 down player who is good enough in coverage and as a pass rusher to stay on the field on obvious passing downs. He is truly a modern inside linebacker.

The 3rd game I watched of Moses was from his Freshman year against Mercer. This was easily his best game on tape. Moses was wearing #18 and had multiple highlight plays during the game. Whilst Moses is clearly playing against a lower standard of opposition,  from watching this tape alone he would be a first round selection. He was easily the best player on defense.

Here, just before the half with Mercer in Alabama territory Moses comes up with an interception. Mercer ran a play action pass and Moses got into his drop and took a quick look back to find this closest threat. This tells him the angle he needs to get underneath #88. Fortunately for Moses the ball was a lame duck and fell right into his arms but he was in the right place to make the play.

The final clip also taken from the Mercer game was on a speed option play where the ball was pitched almost immediately to the running back. Moses reads fast flow from the back and does a fantastic job of keeping his leverage whilst closing to the ball. He keeps himself between the ball carrier and the sideline using it as an extra defender. Moses makes a strong tackle in the open field.

Moses has the athletic profile that may allow him to be a serious contributor at the NFL level. Moses could be deployed as a great sub package linebacker and will have success covering tight ends and running backs. Moses does struggle with runs at him and he does lose eye discipline at times; he is certainly not an old school downhill in the box linebacker. Another aspect that pops out when watching his tape is how hard Moses hits. There are a few plays from the Mercer game where he was just punishing the ball carrier.