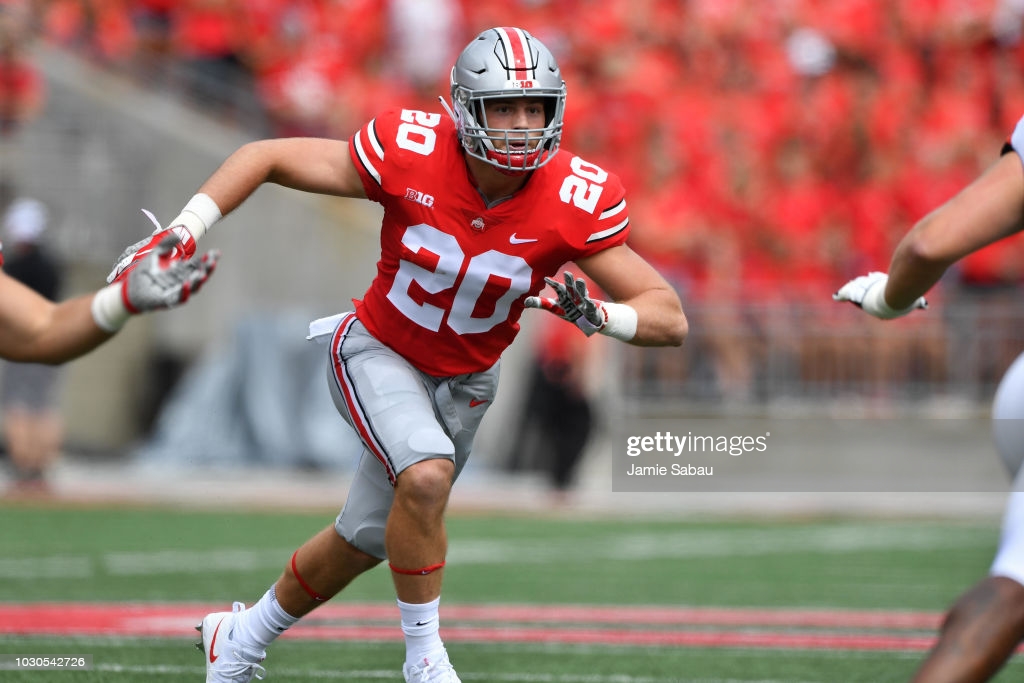 – Instinctual athlete with versatile skill set
– Above average athleticism to play sideline to sideline
– Saw snaps at inside LB, S, Slot DB during his time at Ohio State
– Excellent at mirroring routes in zone coverage and phasing out vertical routes
– Physical player who violently re-routes receivers and gets them off their track
– Ability to carry inside receivers and tight ends vertical to prevent completions and cut-off passing lanes
– Effective in delayed blitz scenarios, causes havoc in backfield with physicality at point of attack
– Good starting experience against quality competition
– More consistent in attacking downhill on outside run plays
– Textbook tackler who shows serious pop behind his pads

– Showcases slow reaction time in attacking inside zone and power run concepts
– Struggles shedding blocks from guards and tackles who make it to the second level
– Struggles maintaining eye discipline in play action and jet sweep motion fakes concepts, gets out of position
– Showcases stiff hips in one on one situations in boundaries versus tight ends and running backs
– Susceptible to double moves on outside when lined up against speedier, shiftier athletes
– Indecisiveness attacking downhill on run plays allows for cutbacks holes on backside of defense

Pete Werner is one of the more versatile athletes in the 2021 NFL Draft class, from either side of the ball. His ability to mirror routes in zone coverage, sideline to sideline ability to play single high safety and football instincts to play all over the field makes him an intriguing evaluation. As mentioned above, Werner mainly played the SAM LB role at Ohio State, but has snaps as a single high safety, at slot corner, snaps as the MIKE backer, and more. He was someone who was heavily involved in the Buckeyes special teams units as well.

First thing to note while watching Werner is how he makes 1-2 plays in a game that helped shift momentum for the Buckeyes defense. Earlier this season against Indiana, Werner forced a fumble as Indiana inched closer to scoring a touchdown. Werner delivers a nice pop, just outside of the goal line, giving the Buckeyes offense the ball. Impressive physicality below from Werner.

There are plenty of reps where Werner is isolated against a tight end in the boundary, and below is one of those reps. Werner is matched up with the Michigan TE Nick Eubanks, who runs a vertical route up the sideline. Werner does a nice job flipping his hips and getting in phase, being patient and waiting for Eubanks to adjust his body to the ball. During the route, Werner does a nice job phasing Eubanks to the sideline and forcing a difficult throw, and making a play on the ball to deflect it away.

One thing Werner needs to improve is shedding blocks more consistently, but he does a nice job against Alabama and Michigan disengaging on outside runs and making the play in the backfield. He attacks downhill on both plays, sets the edge and makes the play. Exactly what you want out of a sideline to sideline linebacker.

Werner typically struggles redirecting on play action and RPO concepts but does a nice job reading his keys, transitioning into coverage and making a play on Heisman winner Devonta Smith to break up the pass. He showcases his fluid hips in coverage and instincts to deliver the hit as Smith is attempting to catch the ball.

Werner makes a seamless transition from undercutting the initial out route run by Indiana slot receiver Whop Philyor, staying in his hip pocket and phasing Philyor towards the sideline. It is rare for a linebacker his size to be able to run with some of the fastest athletes on the field.

Being able to pick up on an offenses’ tendencies in something Werner does well at the linebacker position. Werner diagnoses the screen here, and gets downhill quick, stopping the Penn State running back for a minimal gain.

The play below against Indiana is what concerns me with Werner. He adjusts to the motion across the formation, but is fooled by the outside run fake, and instead of remaining square, he gets all the way turned around. Werner has to be better with keeping his body square to his keys, and not vacating his zone because he is fooled by pre-snap motion and play action.

There are situations where Werner has stiff hips and allows receivers or running backs to get behind him. Against Indiana, the split out running back makes a subtle move at the top of his route to leave Werner in the dust because he was sitting on a short hitch route. Because he is beat, Werner is in trail position and can’t keep up with the foot speed.

Werner’s reaction time and block shedding has to be better at the next level. In the first part of the clip against Alabama, Werner bounces around and hesitates, allowing the frontside tackle to wash him out of the play on this power run scheme. Werner has a chance to make the play if he attacks the tackle, and muddies up the run lane for running back Najee Harris.

In the second part of the clip, against Penn State, the backside tackle on this zone scheme doubles up to Werner, and washes him out of the play. Werner has to be better with his physicality when taking on blocks at the point of attack.

Despite those needed improvements, Werner’s range in Ohio State’s defense was tremendous. The Indiana game was one of his best games on tape in terms of showing off his versatility carrying slot receivers vertically and across the field. In a cover 3 look, Werner transitions into his pass drop and runs step for step with the Indiana slot receiver. Impressive athleticism once again for Werner.

The last thing to highlight with Werner’s versatility is his effectiveness on delayed blitzes. Several times in the Clemson game, Werner forced Trevor Lawrence to make either an errant throw or rushed throw. He showcases imposing physicality when attacking running backs in pass protection and forces quarterbacks to leave the pocket or step up into pressure.

Along with his coverage prowess, an underrated part of #OSU LB Pete Werner's game is how he attacks on delayed blitzes. He disguises it well, then explodes through contact and knocks RB's off balance. Causes havoc, collapsing the pocket.

There is no denying that Pete Werner is one of the best coverage linebackers in this 2021 class. He showcases his football intelligence, instincts and athletic ability to be a SAM linebacker at the next level in a 3-4 scheme and play in sub-packages in third down passing situations. Werner also brings value in the special teams game as well, and is the type of player defensive coordinators would love to have on their defense. He’s not an elite athlete and will probably test moderately well, but his upside, specifically in coverage, is one that could benefit the Steelers defense. While he has some work to do in terms of shedding blocks in the run game, and stiffness in man coverage, Werner translates well to the NFL and can be an effective three down linebacker in the modern game.

Games Watched: vs. Indiana, at Alabama, vs Clemson, at Penn State, at Michigan (2019)