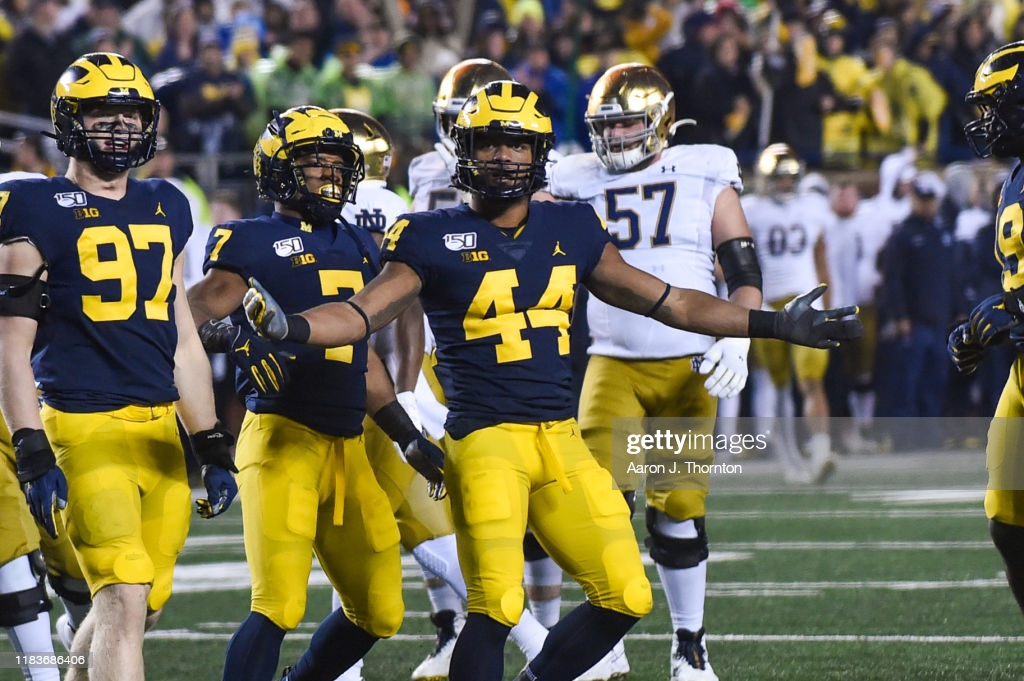 The Michigan Wolverines have had several linebackers drafted in recent years including the Steelers Devin Bush and this year they have another in the draft. Cameron McGrone will be just 20 years old at the draft and he has two years starting as the MIKE linebacker.

Against the pass, he shows solid speed and agility to handle running backs coming out of the backfield, tight ends in the middle of the field or when either is split wide.  He handled RB’s on swing, option and wheel routes and ran with TE’s up the seam or along the sideline.  On deeper routes he puts his body in good position between the receiver and the ball. When playing Zone he can get good depth and he has solid awareness of receivers running through his area. He was used in the deep middle in Tampa 2 coverage.

Vs Alabama, McGrone (44) shows good reactions to a screen to his left and shows solid speed to the outside.

At Indiana, this is just a clip of his mobility in Zone. He is reading run first but once pass is determined he glances back to find the receiver and the works himself under the route to take away the throwing lane.

At Indiana, he is in Man coverage at the top of the screen. He will turn to run with the receiver and uses his body to bump him toward the sideline and is in good position to make a play on the ball.

He showed good timing and acceleration when blitzing.  He was used up the middle and also around the edge and with a clear lane he can get on the quarterback in a hurry. He will aggressively take on blockers in his way and make running backs earn their pass pro stripes.

Against the run he was at his best when he could play downhill and attack gaps.  He has good acceleration into gaps and can make plays behind the line of scrimmage.  He is willing to fill gaps against lead or pull blockers and takes on blocks aggressively. He shows solid hand placement and pad level to keep blockers off of his body. To the outside he shows solid speed to the sideline and is a strong tackler.

Vs Alabama, he’s start on the left over the tight end and will display good pursuit from the backside to bring down the runner.

At Indiana, he will come up to fill the hole and uses his hands and leverage to keep the left guard off of him before making the tackle.

Vs Wisconsin he shows good agility to scrape to his right and then use good change of direction to get into the hole and make the tackle for a loss.

Quicker RB/TE’s will be tough for him to stay with on Man routes across and downfield. There were plays where he would move to cover someone that was already covered by a teammate leaving others open.  His depth was inconsistent in Zone coverage. His mental processing was adequate when multiple receivers ran through his area making him look a little confused and getting hung up on rub routes. Without a clear lane to the quarterback he was often stopped by blockers.  His mental processing versus the run was adequate overall and marginal versus misdirection.  Wisconsin had him going the wrong way all game. He is adequate shedding blocks and gets caught in traffic.

Vs Wisconsin, he is able to make the tackle on this play but his diagnosing of the play is very slow. I counted the right guards taking 6 steps before McGrone began to chase.

Overall, McGrone has solid athleticism, good change of direction, gets downhill quickly and is a strong tackler.  He can handle most RB/TE in Man coverage and has good acceleration as a blitzer. His overall mental processing needs to improve versus the run and the pass especially in Zone coverage.

He would fit best in and attacking 1 gap defense where he can get into hole to make plays.  In coverage, initially it would be best to keep him in Man coverage. Tell him that is your guy and let him stay with him.  He is just 20 and has time to improve.  He could be used as WILL linebacker initially to let him get his feet wet before moving him to the MIKE full time.