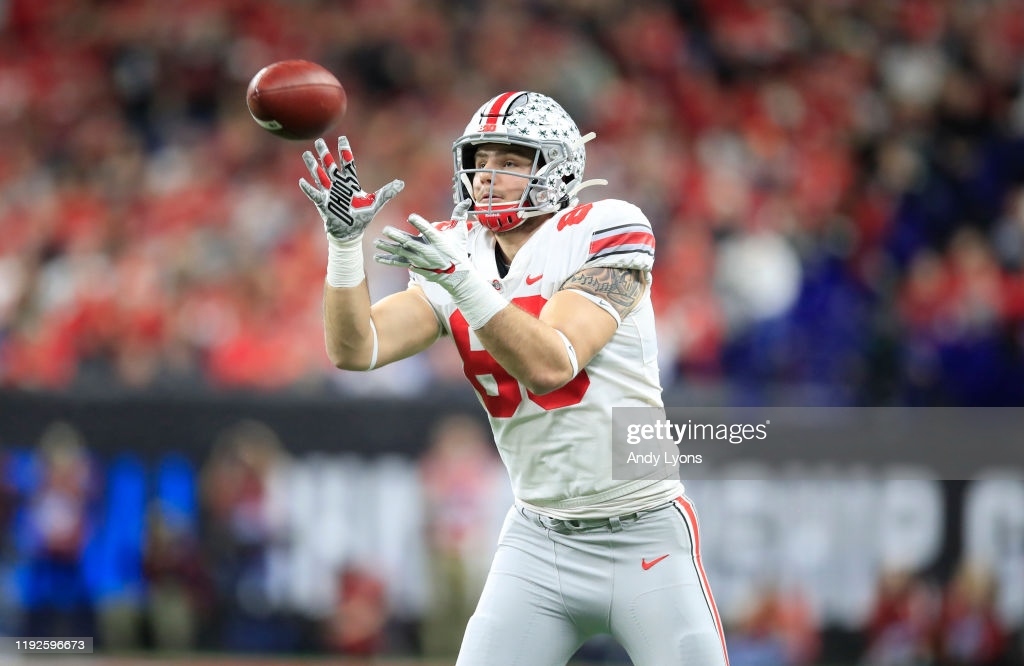 Every team wants to find their Travis Kelce but players like that don’t come along very often.  Sometimes you have to use several tight ends to get the same result.  Luke Farrell can be a piece of that puzzle.  At Ohio State, he played inline, on the wing, in the slot and occasionally in the backfield.

As a receiver, he has solid acceleration off the line of scrimmage and showed solid hand usage to knock away defenders hands. He was used primarily in the short and intermediate routes with an occasional corner route thrown in there.  He displays solid awareness versus Zone to find the open area and likes to use physicality at the top of the route to create space. He has soft hands, catching the ball away from his body and solid ability to adjust to the ball. He can make the contested catch with a defender in his pocket, uses his body well to box out smaller defenders and had good awareness on the scramble drill. It should be noted TE wasn’t a big part of the Buckeye offense with the top 2 tight ends combining for 18 receptions on the year.

At Maryland from the wing he runs a flat route but when the QB moves so does he and he finds an open area to give the QB a target.

At Penn State from the bunch on the left he shows solid acceleration off the LOS and finds the soft spot in the middle of the Zone for a solid gain.

Vs Clemson, he runs a short route to the end zone and use physicality to create a little space and makes the catch with the DB on his hip.

He is a versatile blocker in the passing game.  He can be used outside on screens and stalk blocks using a good base, pad level and hand strength to handle second level defenders. He was used to block one on one with edge defenders and displayed good effort to stay square while hand fighting to keep himself between the defender and the quarterback.  They used him on the move as well to slide across the formation to pass block or out in front of the quarterback when moving the pocket.

At Michigan State, he’s on the left side of he screen here is good look at his form setting up with base and pad level and good effort to stay with the rusher.

Vs Clemson he is on the wing and will block the edge one on one showing solid mobility to ride him up the arc.

As a run blocker, he has good awareness and physicality and plays with a little bit of nasty as well.  He plays with good hand placement and leverage and gets very good movement on down blocks driving his defender into the pile especially on short yardage plays. He can wall off the edge, slide block to kick out the end man on the line or even lead block inside or on a fly/jet sweep.  He shows good timing to climb to the second level and sustains his blocks well.

Vs Indiana, from an inline alignment he uses a wide base, good pad level and had placement along with leg drive to push and control his man (87).

Vs Indiana, he will double with the right tackle before climbing to the second level and sustain his block for about 15 yards.

Vs Michigan State, he is inline on the right side and will block down to the inside and drive his man to help open a gap behind him. He did this often in short yardage and red zone runs.

Very limited production with the majority of his receptions coming in 2018. He has marginal explosiveness and acceleration out of his breaks so he’ll need to rely on physicality to create space. Route tree would be limited to short and intermediate areas. He has adequate speed overall and was adequate after the catch. He will get overaggressive as a blocker and bend/reach for the defender and miss his block.

Overall, Farrell is a player with good mental processing, soft hands, can make the contested catch and is an asset as a blocker in the passing and running game.  He’ll have a limited role as a pass catcher due to a marginal ability to separate or create after the catch.

Every team needs a Luke Farrell.  A guy that can be a consistent blocker on the offense so you don’t need to use a tackle as a tight end. He went down to Texas to work with Duke Manyweather after the season was over. Manyweather is one of the best blocking coaches out there so Farrell is looking to get better. He’ll make some plays in the passing game. He was open more than he was targeted in college.  He can be a 30 reception guy.  His receiving abilities will knock him down a bit but he’ll be a guy who can play in the NFL for a long time.