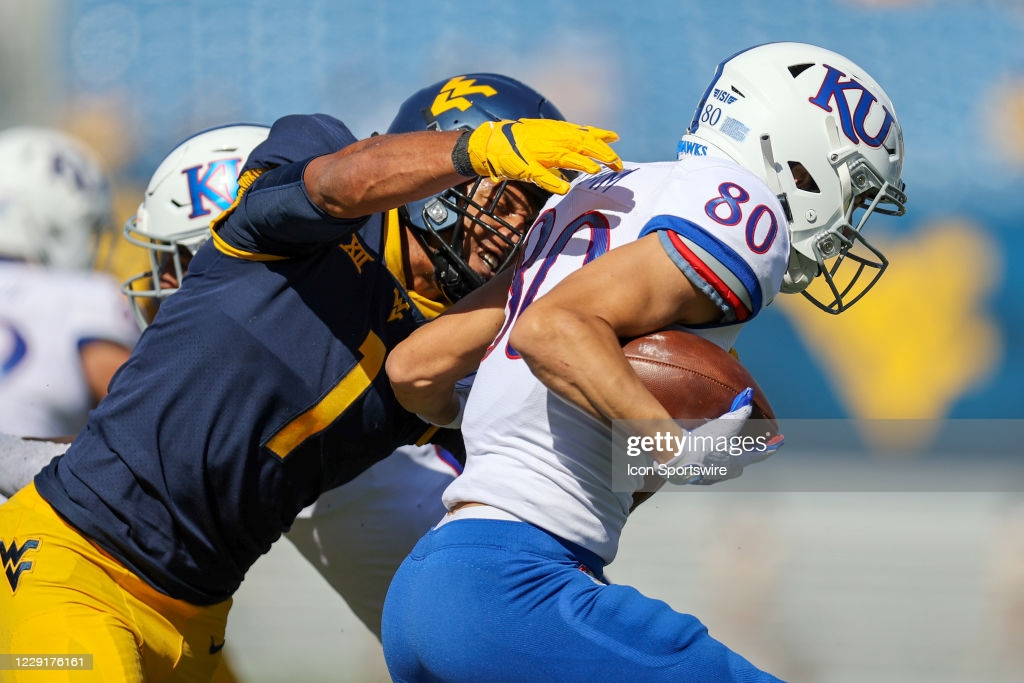 -Rangy, sideline-to-sideline linebacker who profiles as new-age defender
-Sure tackler when he arrives to the ball on time
-Instinctive linebacker that flashes ability to process quickly; doesn’t get caught up in pre-snap window dressing
-Physical player that thrives on contact and emotions in game
-Fires downhill quickly against the run, showcases ability to slip blocks and make plays
-Versatile piece that can move all over defensive front in the box; showed ability to rush off the edge

-Small, thin frame for interior linebacker
-Does not have the length or power to fend off blockers against the run consistently
-Gets caught locking eyes on the quarterback in his drops, leaving him unaware of routes entering his zone
-Needs to develop hand usage and general rush plan to win off the edge in the NFL
-Shows some poor tackling technique early on in games on tape, flying around looking to set early tone

-Graduate transfer from Arizona that started all 10 games for West Virginia in 2020
-Started in all 37 career games played at Arizona
– Earned freshman All-America honors by ESPN.com and 247Sports in 2017 at Arizona
-Finished four-year career with 375 tackles, 21.0 tackles for loss, 9.5 sacks, three interceptions, six pass breakups and one forced fumble
-Competed in the 2021 Reese’s Senior Bowl
-Named top linebacker on National Roster at Senior Bowl in Mobile

If you’re looking for a new-age linebacker that can play all three downs, move around on the defensive front and brings a clear, physical and emotional edge to the game, West Virginia standout linebacker Tony Fields II is your man.

Fields transferred to West Virginia as a graduate transfer following three years at Arizona, where he started all 37 games over three years under Kevin Sumlin in the Wildcats’ program.

A prolific defender in the Pac-12, Fields picked up right where he left off in 2020, dominating in the Big 12, earning an invite to the 2021 Reese’s Senior Bowl in Mobile, where he then went and put on a show, earning the National Team’s top linebacker of the week award.

On tape, Fields flies all over the place. He’s rangy, uber athletic and shows good instincts overall for the position. He’s quick to process and when he wants to fire downhill, he bursts forward.

Here against Washington in 2019 in his final year at Arizona, Fields does a great job processing what’s in front of him and clicks downhill, taking a great angle to the run outside the tackles, laying a good lick with his shoulders square to make the play.

I want to see him clean up the false step when he initially fires downhill, but it’s a bit of a nitpick considering how quickly he gets moving forward when he processes it.

While I do have concerns about his frame overall and how small he appears as an inside linebacker, he has flashed the ability to shed blocks and make plays. He won’t do it in a consistent manner at all, but the ability is there.

Here he does a great job reading the action in front of him, attacking the climbing lineman with a strong punch, allowing him to slide laterally into the hole and make the stop against the run.

Where Fields will excel in the NFL is slipping blocks in the run game. He’s very adept at doing it, and won’t take himself out of plays. He has very good short-area burst to put himself around the ball.

Here against Baylor in 2020, Fields does a great job slipping the lineman’s block late, recovering to get in on the run stop. Yes, the lineman stumbled prior to reaching Fields, but look at the lateral burst to stay clean, causing the lineman to whiff completely.

In coverage Fields has shown the ability to play man and has some comfort spot dropping in zone coverage. While he does have a tendency to lock his eyes on the quarterback and lose touch with routes entering and exiting his zone, he is able to make plays like this.

Watch him at the bottom of the screen read the quarterback the whole time, mirroring his movements and getting into the throwing lane to make the pick.

He didn’t do it often, but Fields flashed the ability to rush of the edge at West Virginia. He looks very comfortable doing it, he just needs to add some technique to it and not rely on athleticism.

He has the necessary burst to get upfield and threaten the edge; he just needs to work on his hands. That’s against Texas left tackle Samuel Cosmi, who could be a first round tackle in the 2021 NFL Draft class.

He nearly got to Texas QB Sam Ehlinger here.

One concern I have with Fields is his hesitancy to attack in space when one-on-one with a skill player. He has the athleticism to succeed in these situations, but it’s almost like he doesn’t trust his eyes fast enough and finds himself stopping his feet.

Here against Ehlinger, it’s clear Fields sees the quarterback starting to scramble, but you see a slight hesitancy, allowing the Texas running back to work into the play and get a hat on Fields.

He needs to attack downhill here. Like Mike Tomlin says, I’d rather say “woah” than “sic’ em.” Fields needs to fire downhill and attempt to make the play in space.

Overall, I think Fields can be a solid three-down linebacker in the NFL following a year or two of adjusting to the league. He should be a special teams ace right away due to his attitude and love for contact and emotion, but there are some finer parts of linebacker in the NFL he’ll have to work on before stepping into a starting role.

He’s a Mid Day 3 development piece that could really pay off in the long run, similar to former WVU linebacker David Long Jr., who was a sixth round pick by the Tennessee Titans two years ago.