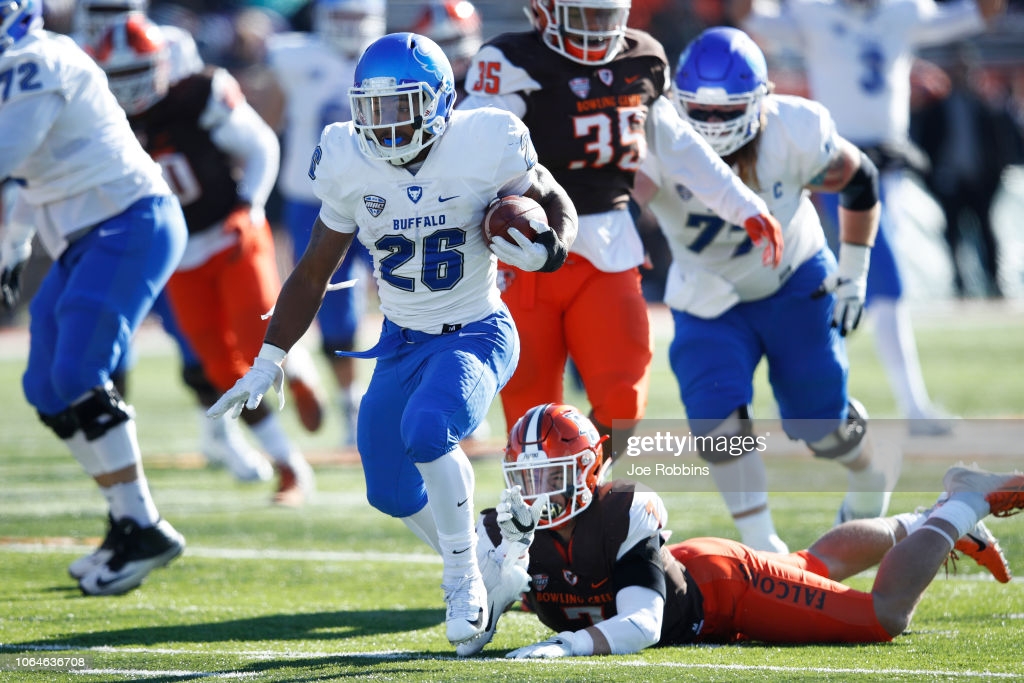 – Elite lateral agility, great quickness and ability to make defenders miss in small spaces, some of the best jump cuts of any RB in this class
– Gets shoulders square, vertical runner when he sees daylight
– Good explosiveness and shows second gear to win in open field, above average (though not elite) long speed
– Has speed to win the edge
– Hard-nosed, physical runner, plays with chip on shoulder, doesn’t go down or out of bounds without a fight
– Nose for the marker/end zone, performs better in short-yardage areas than size would suggest
– Plus vision and finds the hole
– Willing blocker on pass and run plays
– Shows good ball security, takes care of it and able to switch hands mid-play with the ball without losing security
– Ultra-productive back, absolutely took over games, record-setting performances

– Small back, questions about three-down, feature back ability
– Willing in pass pro but lack of size causes him to be overpowered by bull rushes
– Very limited usage as a receiver, occasionally split out but rarely targeted
– Lots of wear and tear, heavily used runner in just 2 1/2 seasons
– Played against slightly lower level of competition

I’m not 100% sure what kind of NFL back will be. But at Buffalo, he was one of the most exciting players to watch. And one of the most productive. One game in and I wasn’t sure if he was a special player. But that’s why you keep watching the tape.

Every back I look at, I ask myself if they have a special trait. What’s Patterson’s? Lateral agility. It’s insane. You can blame it on the MAC competition, keep in mind there are some pretty good schools (and players) there, but he flat out makes defenders look silly. Check out this compilation of jump cuts, causing defenders to whiff at the air.

Won’t see many backs do that.

Though people will predictably knock him for being small, and he is, he’s a tough dude. Doesn’t go out of bounds and the guy just knows where the marker/goal line is. Excelled in those gotta-have-it moments the Steelers missed out on so often in 2020.

Overall, he’s a downhill runner with good vision and gets vertical. He’ll make you miss in the hole, cut a run back, bounce it wide, but when the gap is there, he’s getting square and north/south.

I didn’t see a lot of negatives on tape. He doesn’t naturally have a ton of power, winning with leg drive, effort, and his physicality, but he isn’t built like Derrick Henry, clearly. He did struggle in pass pro the few times he wasn’t touching the football, getting blown up here, though props for squaring up and taking on the collision.

There’s very little receiving tape available. 20 catches in three seasons and the guy didn’t catch a pass in 2020. I’m not even sure he was targeted. The offense ran through Patterson. Literally. And he was the centerpiece of the offense so there’s considerable wear and tear. Always a worry when drafting these guys at the next level. He carried the ball 20+ times in 15 career games. Six games of 30+ carries. Compare that to some other top backs in this class.

About the only guy I can find with more wear/tear of the top names in this class is Oklahoma State’s Chuba Hubbard.

Patterson’s comp is pretty easy in my mind. Slightly smaller, probably faster, version of Devin Singletary. Games built around quickness and lateral movement with questions about size, pass pro, and use out of the backfield. Patterson is a heck of a lot of fun though he’s not going to be a three-down player and probably won’t be much of an asset unless the ball is in his hands. Early-down kind of runner. Probably not the type of guy the Steelers are in the market for but if they want a back on the roster with a skillset they don’t currently have (Anthony McFarland is similar but doesn’t have the quicks and has more speed), Patterson would be that guy. Pittsburgh also loves production and guys who find the end zone. Few did it like Patterson.

Games Watched: vs Miami (OH), at Bowling Green, vs Kent State, vs Akron